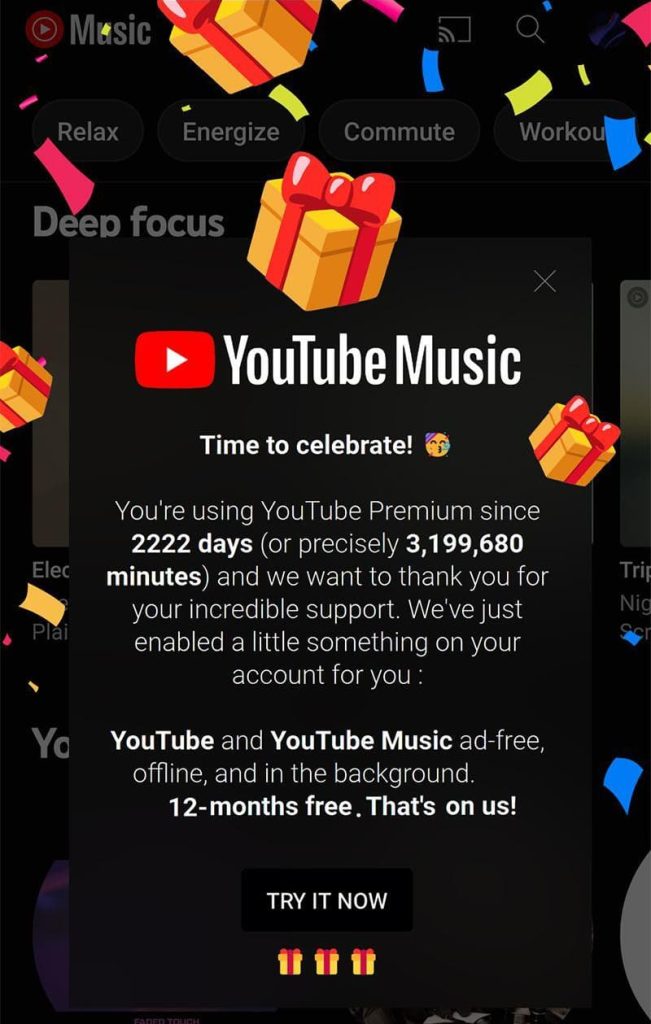 Update 6/13: According to a Google spokesperson, YouTube is not running any such offer like the one described in the screenshot, which the company cannot confirm the origins of.

In a rather whimsical move by Google to reward loyal customers, YouTube Premium users who have subscribed for over six years are getting 12 months of free service.

After being subscribed to YouTube Premium for “2222 days (or exactly 3,199,680 minutes),” one user this evening reported getting a “Time to celebrate” prompt in YouTube Music for Android. That works out to just over 6 years and 1 month. Complete with an on-screen shower of presents and confetti, we’ve only been able to find one report of this so far, though more than a few people say they’re also near that mark. We will see then how widely available this offer is.

…we want to thank you for your incredible support. We’ve just enabled a little something on your account for you:

According to the annual Premium plan introduced in January, this is a $119.99 value. After getting the prompt, your next billing date is adjusted accordingly.

The Redditor would have started their paid subscription in early May of 2016, which is when the YouTube subscription started rolling out internationally after launching stateside in late 2015. At that time, the service was known as “YouTube Red” with the “YouTube Premium” rebrand coming in June 2018.

YouTube Premium costs $11.99 per month for ad-free and background playback, offline downloads, Music Premium, and the ability to test some features early.

Meanwhile, some have raised an interesting point about how the “Members since” date (see the instructions below) does not reflect their original subscription to Google Play Music. That date only reflects the (relatively recent) migration to YouTube Music and not years of earlier paid usage. With this promotion, YouTube is clearly placing an emphasis on its premium service, but some leniency would have been ideal.