If you’ve gone searching for info on The Flight Attendant, The Gilded Age, or Peacemaker In the past three months, you may have contributed to the table above. That’s a donut of data from the service JustWatch.com, which lets users figure out which shows and movies are streaming and where. According to these stats, HBO Max saw a growth of 2% of its market share, which allowed it to overtake both Disney+ and Hulu. Netflix and Prime Video are still on top.

Another table from JustWatch shows the changes over the quarter per streaming service. Prime Video, HBO Max, Apple TV+, and Paramount+ all went up, Netflix and Hulu are down, and Disney+ stayed the same.

But these numbers are based on “measured interest in SVOD [subscription video on demand] services on JustWatch” and only for the US. “Measured interest” translates to how many times someone looked for content and found it on the various streamers. Lots of searches for Stranger Things, for example, would probably push Netflix up, not down (so expect that as the fourth season approaches). But is this the right way to measure SVOD market share? It is, after all, how JustWatch and competitors like ReelGood and now Plex do it: They each use data they’ve collected from their own users.

And why not? You probably don’t want to base it on the number of people with access to the service. Access doesn’t equal viewing. A 2021 ScreenMedia article argues that subscriber numbers are “a flawed measure of SVOD success.” The reason is that the number of subscribers is self-reported. Netflix cherry-picks how it will report things, usually breaking down things by region so you can’t even estimate the number of US-only subscribers, for example. Some streamers report only on paying customers, even if they have a free or give-away tier of service. Amazon has over 200 million subscribers to Amazon Prime worldwide, with 112 million in the US, but it doesn’t claim all of them as Prime Video users. Also, few consider YouTube, which is probably the second-most-watched, behind Netflix.

Then there are more traditional methods employed by Nielsen, the audience-measurement company behind the TV ratings for the entirety of television history. Last year, it introduced a new tool to help re-invent itself for the streaming age, using audio-recognition tech to listen in on what people are watching. That’s got to be more accurate than relying on people to fill out a paper ballot in their living room and hope they don’t lie about watching PBS when they were watching daytime soaps.

Recommended by Our Editors

Nielsen—which does take YouTube into consideration—recently released its first state of Play report, which focuses specifically on SVOD services. It noted things like the number of unique titles for streaming is growing (now at 817,000) and that the average time per week spent watching streaming content has gone up by 18% in a year, from 143.2 minutes in February 2021 to 169.4 minutes in 2022 .

The Nielsen ratings report each month still pegs cable TV as the major way people get TV content, but streaming has outpaced broadcast/over-the-air TV. The breakdown within streaming then puts the most viewed services as Netflix followed by YouTube, Hulu, Prime Video, and then Disney+—numbers that almost completely disagree with that data donut at top. 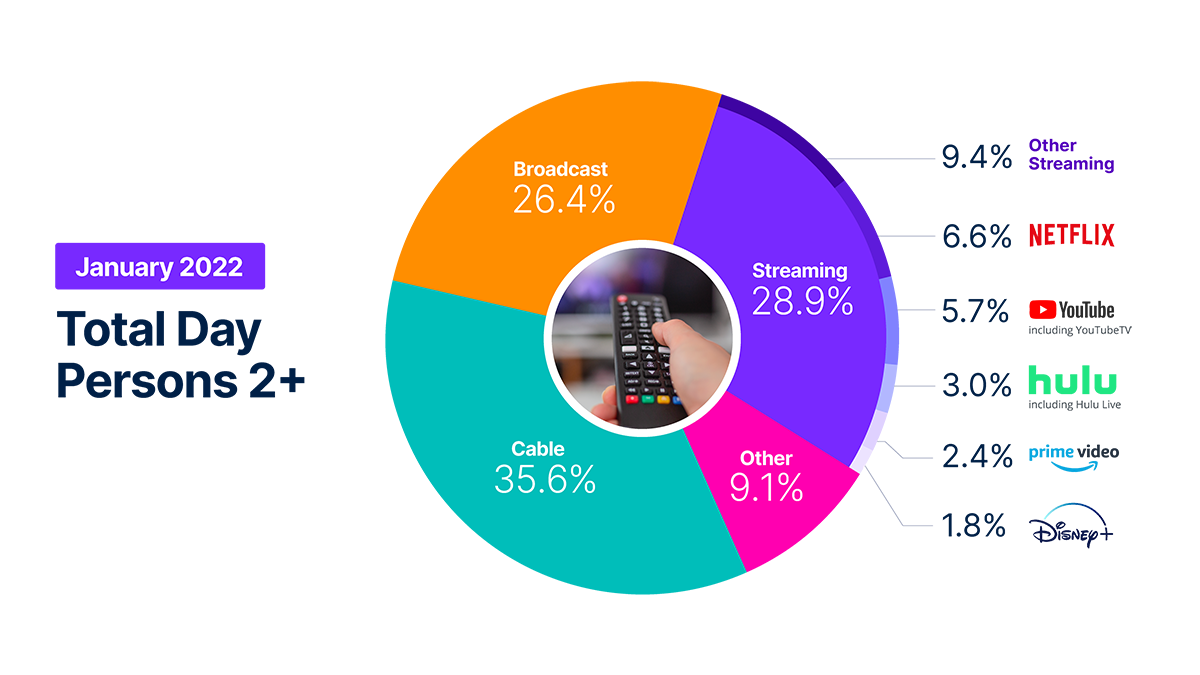 Get Our Best Stories!

Sign up for What’s New Now to get our top stories delivered to your inbox every morning.

This newsletter may contain advertising, deals, or affiliate links. Subscribing to a newsletter indicates your consent to our terms of Use and Privacy Policy. You may unsubscribe from the newsletters at any time.