Traffic volumes are expected to be above average on western Washington highways over the Memorial Day weekend.

This year, the department shared travel charts for Interstate 5 between Lacey and Tacoma, US 2 between Stevens Pass and Skykomish and Interstate 90 between North Bend and Cle Elum.

WSDOT said drivers could experience higher than usual traffic on highways between May 26-31, especially on I-90 “where lengthy delays are expected.” I-90 runs across Snoqualmie Pass and stretches through almost the entire state from Seattle to Spokane.

WSDOT traffic analysts created the charts by looking at how many cars were on roads during previous Memorial Day weekends. WSDOT said drivers can expect some congestion on the roads when the charts turn from green to yellow. When the chart is red, the WSDOT said the roadway is predicted to be at capacity.

“Once a roadway reaches capacity, any small incident can cause significant reserves,” WSDOT said.

The black line on the graph shows what traffic is like on a typical weekend.

I-5 between Lacey and Tacoma

Anyone driving on I-5 between Lacey and Tacoma should expect moderate to heavy traffic with some congestion at times each day over the Memorial Day weekend. However, the WSDOT charts show traffic is predicted to be about the same as a typical weekend.

Northbound drivers should expect the heaviest traffic on Thursday between 5 am and 2 pm, Friday between 6 am and 5 pm, Saturday between 9 am and 4 pm, Sunday at 10 am and between 1-8 pm, Monday between 10 am and 9 pm and on Tuesday from 5 am until 5 pm

Southbound traffic on Memorial Day is predicted to be less congested than a typical day, with the highest travel times between 11 am and 2 pm 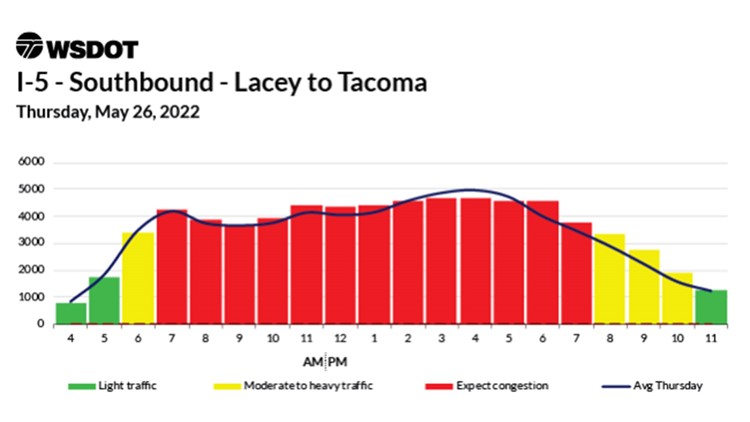 I-90 between North Bend and Cle Elum

Eastbound traffic on I-90 over Snoqualmie Pass is expected to be higher than normal on Thursday but not reach capacity.

Traffic on Friday, however, is predicted to be above normal for most of the day. The WSDOT said eastbound traffic is expected to be “moderate to heavy” between 7-10 am and 8-9 pm The roadway is expected to reach capacity from 10 am until 7 pm Friday.

Traffic will also be higher than normal on Saturday, with the heaviest congestion expected between 8 am and noon. Eastbound traffic is predicted to be at or below a typical weekend from Sunday to Tuesday.

Westbound traffic is expected to be at or below a typical weekend between Thursday and Sunday. However, westbound drivers should “expect congestion” between 2-5 pm on Sunday, but it’s predicted to be less than the average weekend.

On Memorial Day, drivers should steer clear of westbound I-90 from 9 am until 8 pm to avoid the worst congestion. 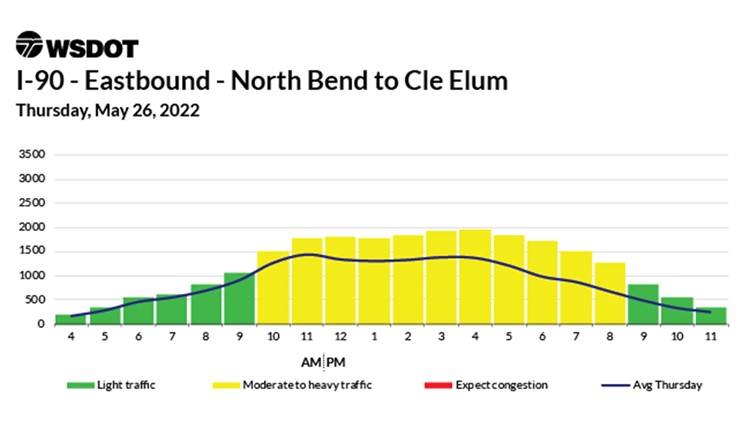 US 2 between Stevens Pass and Skykomish

Eastbound traffic on US 2 over Stevens Pass is expected to be higher than normal Thursday through Monday. The roadway is predicted to reach capacity Friday at 11 am and between 2-7 pm, and again Saturday between 9-11 am Eastbound traffic is predicted to be higher than normal the other days over the holiday weekend but not reach capacity.

Westbound traffic is predicted to be at or below normal Thursday through Saturday, with moderate to heavy traffic Sunday between 11 am and 8 pm 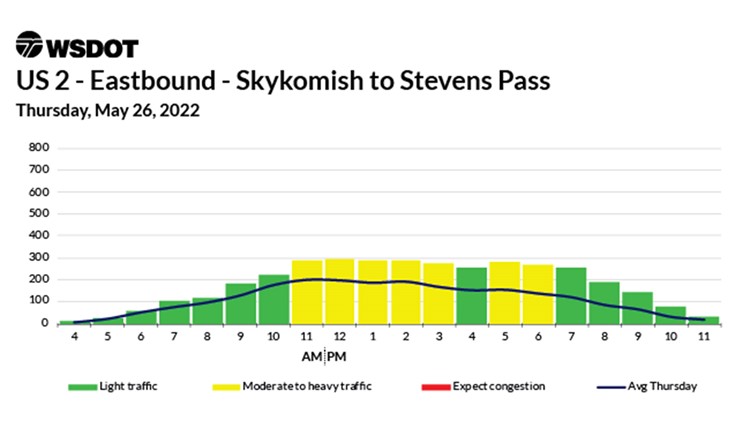 Due to the expected increase in traffic, the WSDOT is advising drivers to plan ahead to help save time and any frustration.

The WSDOT also warned travelers of longer than normal wait times on Washington State Ferries (WSF) docks over the holiday weekend. Click here to check the WSF travel alert website for the latest information about cancellations and delays.