UFC Fight Night: Holm vs. Vieira will be the next Fight Night offering from the MMA juggernaut and it has a series of intriguing matchups lined up for the fight fans. The event will go down this Saturday, May 21 at the UFC Apex Center in Las Vegas, Nevada.

In the headliner, No.2-ranked contender Holly Holm will return to action after a long layoff to take on No.5-ranked Ketlen Vieira in a women’s bantamweight clash. Both women will walk into their second straight UFC main event this weekend, hoping to insert themselves into the 135lbs title picture with a big win.

Watch the promo for UFC Fight Night: Holm vs. Vieira below:

The co-main event of UFC Vegas 55 this Saturday will see unranked welterweight Michel Pereira go toe-to-toe against Santiago Ponzinibbio in what promises to be an exciting contest.

Also on the card, Chidi Njokuani will look to record his fourth consecutive finish when he locks horns with Dusko Todorovic in a middleweight bout.

Read on to find out all the necessary details about television channels and online platforms where you can legally watch UFC Fight Night: Holm vs. Vieira in the United States, the United Kingdom, and India.

The UFC Bundle is an excellent option for non-subscribers to get access to ESPN Plus at a pocket-friendly rate. It comes with a one-year subscription to the platform, along with access to UFC Fight Night: Holm vs. Vieira at $99.98.

The Disney Plus Bundle is another alternative. It costs $83.98 in total, including the event, and $13.99 per month for access to ESPN Plus, Disney Plus and ad-inclusive Hulu.

The preliminary card for the UFC Fight Night will also be available on ESPN Deportes (Spanish) and ESPN News, written as ESPNews, which is currently accessible via Hulu Live TV, Sling TV, Fubo TV, Vidgo, AT&T TV and YouTube TV. All of these platforms have their own subscriptions.

The early prelims can be viewed on UFC Fight Pass as well, which is available at a cost of $9.99 per month and $95.99 per year. This will give you access to live UFC prelims and the full library of previous UFC and affiliate promotional fights.

UFC Fight Night: Holm vs. Vieira prelims and main card will be broadcast live on BT Sport 1 in the United Kingdom and simulcast on the BT Sport app and website. Contract-free monthly passes are available at £25, which can be canceled at any time. BT Broadband ownership is not required to purchase the passes.

However, those who want a long-term subscription added to their existing BT Broadband or BT TV package can go for the ‘Sport’ contract at £15 a month or the premium ‘Big Sport’ contract at £40 a month. Furthermore, Sky TV customers can add BT Sport to their television with a £20 per month contract.

In India, the UFC Fight Night: Holm vs. Vieira main card will be available for streaming live on the Sony LIV app and website with a premium subscription. Plans are available at Rs. 299 per month, Rs. 699 for six months and Rs. 999 for a full year. The event will also be broadcast on Sony TEN 2 (English) and Sony TEN 3 (Hindi) on television.

Watch the top finishes of some of the fighters competing at UFC Vegas 55 this Saturday: 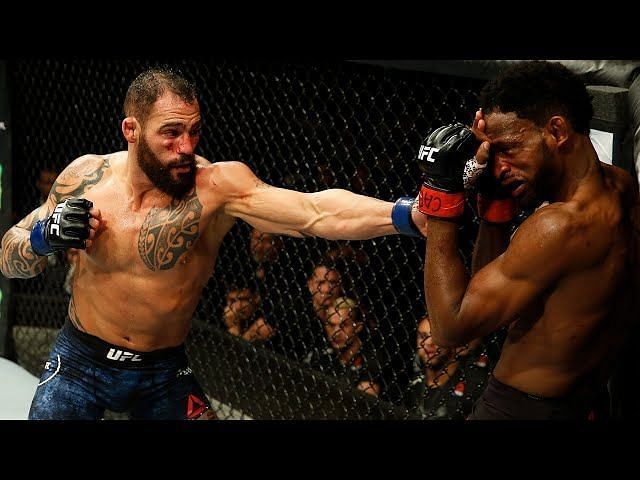