TORONTO — In the hours before the Stars’ 4-0 loss to the Maple Leafs on Tuesday night, Tyler Seguin prophesized his team’s matchup with Toronto first-time starting goaltender Erik Kallgren.

“It probably goes two ways with a new goalie,” Seguin said, “he’ll be unbelievable or he’ll be a little shaky.”

Kallgren posted a 35-save shutout in his first career NHL start, handing the Stars their third straight loss with the trade deadline less than a week away. After typing the Wild in the Central Division standings nine days prior, the Stars have fallen out of a playoff spot, albeit with four fewer games played than Vegas.

It was the fourth time this season that the Stars have been shut out. The Stars (32-23-3) hope their swoon ends Thursday in Montreal.

“We looked a lot slower than they did tonight. A lot of it has to do with puck management. We weren’t physical, nearly physical enough. So you take those two areas, and if you correct those two areas, the rest of it will correct itself.”

Dallas has been susceptible to out-of-nowhere performances by opposing goaltenders this season. Montreal’s Samuel Montembeault made 48 saves against the Stars two months ago. Last month in Arizona, Scott Wedgewood surrendered one goal to the Stars. st. Louis’ Charlie Lindgren beat the Stars twice. So did Ottawa’s Filip Gustavsson.

Kallgren came into Tuesday backstopping a Toronto team that was without Hart Trophy candidate Auston Matthews (due to suspension) and in a tailspin defensively. In the 12 games prior to Tuesday against the Stars, the Maple Leafs allowed 4.58 goals per game. They had fewer allowed than three goals just once. An injury to Jack Campbell and Petr Mrazek’s performance had the hockey community wondering where Toronto would find its goaltending.

Dallas has been vulnerable to these types of performances from no-name opposing goaltenders because they lack scoring depth. Behind the top line of Jason Robertson, Roope Hintz and Joe Pavelski, the scoring has been inconsistent.

After two months together, Tyler Seguin, Jamie Benn and Denis Gurianov were split up on Tuesday night, as Alexander Radulov replaced Gurianov on the second line. That switch lasted less than one period as the line was on the ice for both Maple Leafs goals in the first.

“We’re going to have to look at everything right now,” Stars coach Rick Bowness said. “That Seguin, Rads and Jamie were minus-2 right away and they should have been minus-3. They gave up a third chance. That was enough.”

Benn: “We just have to find a way to be better. It wasn’t good enough tonight. Going to have to dig in, and step up. … I think it starts with competing, playing the right way and being hard to play against.”

Seguin: “Frustration, for sure. I was really excited [to be reunited with Radulov], and very short-lived. Strange game, weird bounces and reads that we usually make better reads. Definitely goes for myself. Look at some clips and get back to playing a lot better in our own end.”

Seguin has 19 points in his last 22 games, but six have come on the power play. Benn has two goals in his last 13 games, and is on pace for a career-worst 44-point season. Gurianov has four 5-on-5 goals all season. Radulov has scored three goals total in 2021-22. Radek Faksa hasn’t scored in any of the last 40 games, a streak now more than four months old.

As Robertson hits the 30-goal mark, Hintz solidifies himself as a No. 1 center, and Pavelski continues to defy the aging curve, the rest of the Stars have lagged behind. If the Stars want to continue their playoff push — and ultimately make noise in the postseason — depth scoring will be key.

“It’s going to be huge,” Benn said. “Roope’s line can’t do it every night. I think it’s on myself, Seggy and whoever we’re playing with to step up and be better.”

A minor fix further down the lineup would be to re-insert Jacob Peterson, whose nine 5-on-5 goals are more than every Stars except the top line and Seguin.

But that can only do so much to drive scoring into the bottom three lines.

“It’s something everyone’s been stressing all year,” Seguin said. “On the road is when it’s crunch time, you go through the lineup. Tonight wasn’t great.”

Khudobin has surgery: Stars goaltender Anton Khudobin underwent “a right hip arthroscopy and labral repair” on Monday in New York, the team announced on Tuesday morning. The surgery ended Khudobin’s season, and gave him a six-month recovery timeline for returning to game action.

Khudobin is currently on AHL affiliate Texas’ roster, and had not played a game since Jan. 29.

“It’s just wear and tear over the years,” Stars general manager Jim Nill said. “It started to really bother him around January, and just got worse and worse.”

Khudobin’s surgery was done by Dr. Bryan Kelly, the same surgeon who did Tyler Seguin’s hip surgery in Nov. 2020. If Khudobin follows the six-month timeline, he should be ready to play around the time training camp starts in the fall.

Nill said the injured Khudobin’s performance this season, when he struggled in nine NHL games to a .879 save percentage and 3.63 goals against average. The Stars waived him in December, and he played six AHL games for Texas. 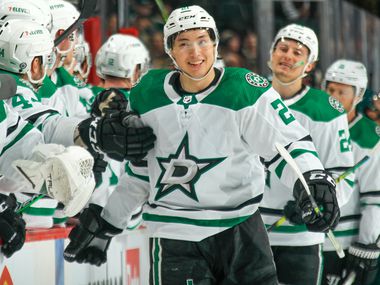 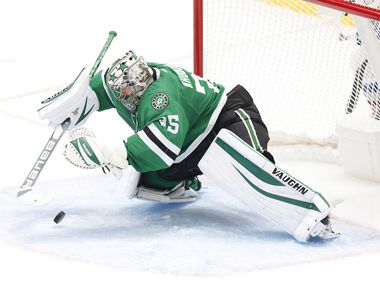