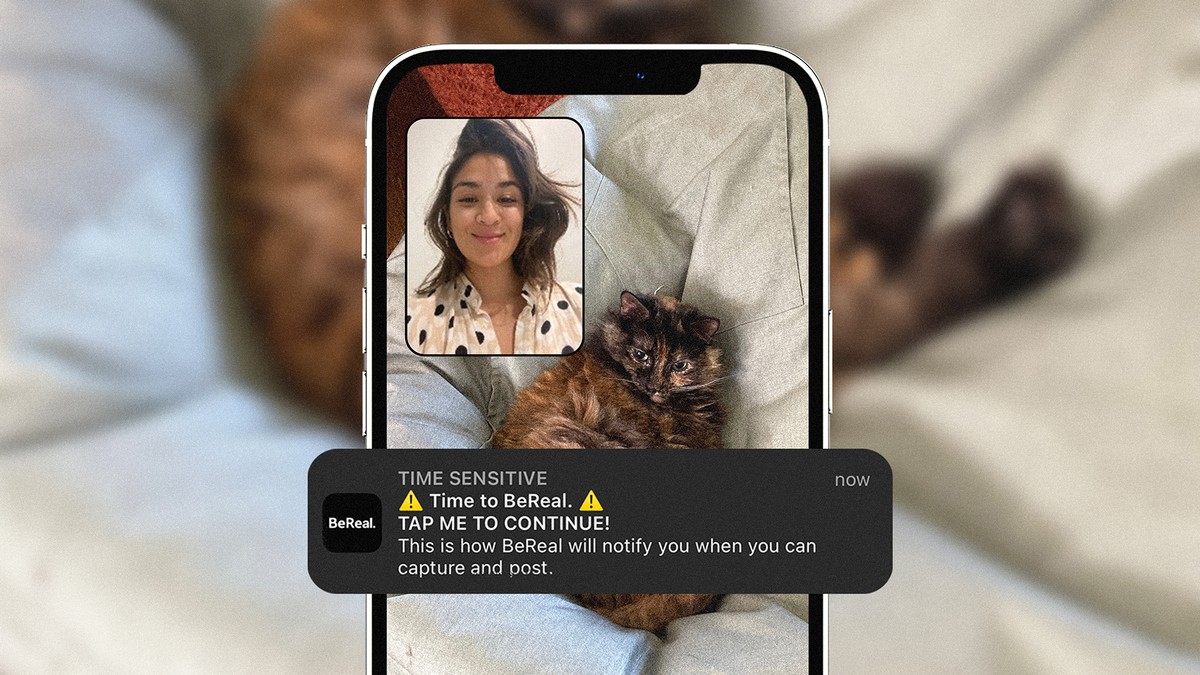 Feet on a couch. A laptop screen. Dollar fifty oysters at happy hour. A shaky view of a tree-lined city street. Someone’s sleeping cat. Sand-covered legs on a neon beach towel. What do all of these things have in common? They’re all staple fare for BeReal, the app that is transcendently fun because it is deeply mundane—the contradiction that makes it the only good social media platform.

For the uninitiated, BeReal is an app that simultaneously sends its users a push notification once a day, at a random time, compelling them to capture whatever it is they’re doing right at that moment with a simultaneous front- and back-facing camera shot. Posts disappear the next day, and the only grid of old photos you can scroll through (BeReal calls them “Memories”) is your own. While there’s technically a Discovery mode that displays stranger’s posts in seemingly bottomless succession, I literally cannot imagine why you would want to look at that.

The BeReal experience combines the best things about 2010s Facebook albums, Instagram Close Friends stories, and Snapchat: a delicious cocktail of unflattering photos, quasi-intimate communication, and impermanence. As a woman who loves nothing more than commenting “Mmmmm” when someone I love posts a photo of food and “sexy” when someone I love is looking sexy, I’m hooked. BeReal feels like a return to a time when posting on social media felt less like a performance and more like a way I actually enjoyed spending my time. Fuck the curated-to-look-uncurated photo dump! Fuck “personal news”! Fuck an infographic about the diaspora! I want to see a blurry photo of my college roommate’s legs! The entertaining thing about BeReal is the same thing that’s entertaining about any social media platform: it’s awesome to be online with your friends. What makes BeReal so special is that that’s basically all you can use the app to do.

BeReal has beaten those apps designed to limit how long you can spend on social media at their own game, too, because it is—and I say this with love—annoying and hard to use. The push notifications are wonky; There’s some kind of fisheye camera effect thrown in that sometimes warps objects and faces to cartoonish proportions, stretching limbs like Silly Putty; sometimes photos just… don’t post. And, crucially, there’s a hard limit to how much you can scroll, because there’s a hard limit to how much anyone can possibly post. I don’t think I’ve ever spent more than five minutes on BeReal in a single sitting; every time I open the app, I am delighted by how quickly I’m able to close it.

Still, there’s something about BeReal that makes me feel preemptively wistful. I remember the early days of having fun on every other social media platform I’ve ever joined. I loved “hacking” someone’s Facebook account to post a status that says “I love MILFs” or concocting my inaugural Instagram post, a black-and-white photo of my friend Olivia holding a cookie cake in my 2011 Toyota Yaris, inexplicably captioned: “’ Be the change you want to see in the world.’ – Gandhi.” In my bones, I know that BeReal’s decline will be swift and merciless; I feel it coming in the friend requests I’d rather ignore and the urge to retake a selfie because I don’t like the way my chin looks (especially embarrassing because the app reveals how many times users take a shot before posting). But for now, the crooked little window into the mundanity of my friends’ lives chugs on triumphantly. At least it’s boring on purpose.