Soon after the onset of the coronavirus pandemic, Brian Schultz sat down to think.

“If I had a white piece of paper and I was going to start a new company, what would I do differently?” he remembers asking himself.

This line of thinking wasn’t unusual for Schultz, the CEO of Look Cinemas.

Schultz, 52, helped pioneer the concept of the dine-in movie theater as founder and longtime CEO of Dallas-based Studio Movie Grill, growing from one theater in Dallas in 1993 to 35 locations in 10 states, with several competitors popping up in its wake up.

Studio Movie Grill was the textbook model of success, until COVID-19 forced the closure of movie theaters and left Schultz’s company with almost no revenue for five months. At one point, the company’s 7,200-person workforce shrank to only 34.

Some locations began to reopen in June 2020, but recovery was sluggish as the virus persisted. Even the opening of a new theater in Fort Worth later that summer wasn’t enough to give a shot in the arm to what Schultz had termed “Studio Movie Grill 2.0.”

As pandemic pressures continued to take a financial toll, Schultz and his lenders stopped seeing eye to eye. At the time it filed for bankruptcy, the chain listed assets between $50 million and $100 million and liabilities between $100 million and $500 million. Lenders wanted to cut costs wherever they could and double down on what had been successful before. Schultz wanted to try new ideas while keeping as much of the company intact as possible.

“That was kind of my cue to start Act Two,” he said.

Schultz left the company he founded to start a new venture. As CEO of Look, Schultz hopes to revolutionize his original innovation and give audiences a reason to return to the movies. Dallas-based Look has five locations, which Schultz aims to grow to 20 by the end of 2022.

The company has raised $12 million from investors so far, according to a May filing with the Securities and Exchange Commission.

“What we’re doing at Look is trying to bring the entire industry back,” he said. “I have a core belief that if you don’t create a unique experience at the movie theater, there’s going to be problems ahead for the entire industry.”

Schultz grew up in southern California, and while he said there wasn’t always money to see movies at the theater as a kid, he was immersed in the movie business from a young age. He graduated from California State University-Chico with degrees in musical theater and finance and watched as some of his childhood acting partners went on to achieve success in Hollywood.

After he graduated, Schultz’s career path took him into politics, where he worked on US Sen. Arlen Specter’s 1992 reelection campaign. Specter was down in the polls when Schultz stopped at a single-screen movie theater in Bethesda, Md., while on the campaign trail. The sold tickets for $1 and served frozen theater chicken tenders and warm beer to accompany the screenings.

“I had a love-at-first-sight kind of reaction to it,” he said. “I literally just loved it.”

Expecting Specter to lose, Schultz had started thinking about what he could do after the campaign ended. He couldn’t stop thinking about the theater in Bethesda but knew there was also room for improvement.

“How could we take that to the next level?” he remembered thinking. Campaign downtime was soon filled with drafting business plans and thinking about how Schultz could reimagine moviegoing.

Then the unexpected happened. Specter staged an comeback and won the race, landing Schultz what he thought was his dream job as an assistant working on Middle Eastern policy. Soon after starting, Schultz realized his heart was in a different place.

“I was a terrible bureaucrat,” he admits. Days filled with historical writing and technical work didn’t fulfill his desire to make a difference in the world.

Schultz quit politics to figure out whether his movie theater-restaurant combination could actually be successful. He secured an investor and was making plans to introduce the concept in southern California when he realized he had yet another problem: “I really didn’t know how to run a restaurant or a movie theater,” he said.

So he drove his car across the country, visiting any movie theater that had something special to it and learning the ropes from managers and employees. He’d persuade theaters to let him work shifts alongside employees, which he said helped him understand how the business worked from the ground up.

Schultz launched Studio Movie Grill in Dallas in 1993 with a single-screen theater and quickly expanded it into a successful company. Less than a year before the pandemic, the theater chain announced a $100 million investment to help accelerate its growth.

As the pandemic took a financial toll on the movie business, Studio Movie Grill was no exception. The company filed for Chapter 11 bankruptcy in October, promising that it would restructure and “emerge a stronger organization built for the future,” according to a letter from Schultz at the time.

After exiting Studio Movie Grill, Schultz acquired the Look Cinemas brand, which had operated one theater in Addison before the pandemic. He admired the upscale experience the theater provided and once again saw the potential to innovate.

How things are changing

After revolutionizing the movie theater industry, Schultz wants to reinvent his creation for a new generation, which means letting go of some decades-old practices. “I’m no longer the core audience,” he said.

For example, Schultz always loved bringing the dine-in restaurant experience into the movie theater by having servers take guests’ orders, but over the years, many customers told him they found it distracting.

With Look, Schultz has decided to mirror the approach a live theater performance that would take and reduce distractions for guests during the movie. Servers are around to help patrons before the movie begins, but once it starts, the film becomes the main focus.

“We don’t ever want to lose the hospitality of having a server help take your order, make sure you get what you need, those kinds of details. But when the movie starts, we switch gears, and then the movie becomes the main feature — we just slide quietly into the background,” Schultz explains.

Look has even ditched some of the sleek finishes found inside the auditoriums of other upscale theaters, allowing customers to totally focus on the movie in an environment that feels more like a black-box stage than a big-budget movie theater.

In reimagining the dine-in theater concept, Schultz has left no detail unconsidered. While redesigning the theater’s menu, Schultz and his team selected ingredients and designed the preparation process so that food will remain hot until it arrives at the customer’s seat. Schultz has even engineered the kind of plates that are used in the theaters, selecting the model that makes the least amount of noise as it is placed near a customer’s seat.

“It’s probably because we all had more time at home than we should have,” Schultz admitted with a laugh.

He also revamped his business model to include more than just movies. As the film industry continues to limit new releases, Look is expanding its programming beyond first-run movies to include concerts, sports, live performances and corporate events.

“We’re going to do the Hollywood content as our main business, but a lot of what we’re doing is programming events where we give guests an experience. We just give them great hospitality, along with whatever they want to put on the screen,” he said.

Schultz retained his “all stakeholders win” philosophy from Studio Movie Grill, which extends to guests, vendors, staff, investors and the communities where theaters are located. As the company expands, Schultz wants to go where his theaters will make the most impact.

“We’re trying to go primarily to areas where the theater is the center point of the community and it’s really necessary that a theater is there,” he said.

Schultz also has revived some locations that closed during Studio Movie Grill’s bankruptcy reorganization, turning them into Look theaters.

“Right now, throughout the country, a lot of movie theaters are being abandoned. Clearly, Goldman Sachs abandoned a lot of the Studio Movie Grill sites, where I had amazing teams and employees that we really cared about, and communities that really trusted us,” Schultz said.

The labor shortages pleading restaurants, bars and other service industry employers haven’t been a problem for him so far, Schultz said. He said the technology introduced to reduce distractions in the theaters has also helped the 150-member teams at each location be more efficient and earn a living wage.

Schultz’s commitment to all stakeholders has helped set him and his business approach apart, said Christina Rossini, chair of the Conscious Capitalism Dallas chapter, of which Schultz is a longtime member.

“The reason that he hasn’t had an issue with finding help, even in this rockiness, really speaks to the company culture,” she said.

The Conscious Capitalism movement emphasizes key tenets: Businesses should exist for reasons beyond making a profit; should engage and create value for all stakeholders, not just shareholders; and businesses should have leaders and cultures that reflect these values.

Rossini said Schultz’s commitment to the movement’s values ​​speaks for itself. “He’s been a huge champion, a wonderful advocate, a steward of resources and a steward of the community,” she said.

Look’s newest theater opened Aug. 12 in Glendale, Calif., bringing the total locations in the Los Angeles area to four. The other Look theater is in Dallas, near the intersection of Northwest Highway and Stemmons Freeway. A sixth location is planned for Dobbs Ferry, NY, in the New York City suburbs.

As the movie theater industry navigates a way out of the pandemic, Schultz said he doesn’t see other theaters as competition.

“I believe if the entire industry does well, all boats will rise, so I’m hoping that the entire industry really picks up on this idea of ​​not resting on our laurels, not wishing that things were the way that they were but actually embracing the opportunity to lean forward to the future and innovate on the industry,” he said.

There’s one industry relic Schultz hopes to make a thing of the past — the $10 bucket of popcorn, which he said represents an old-school business model more driven by profits than a quality experience. He’s charging $4 for snacks and $8 to $12 for entrees.

“Saying you have a 100% captive audience, therefore you can charge any price you want — I think those days are gone, and I think they should be gone,” he said. “You have to upgrade the quality of the experience, make sure there’s hospitality, and give your audience a reason to come out to the movies. That’s what we’re embarking on to do every single day, every single show at Look.” 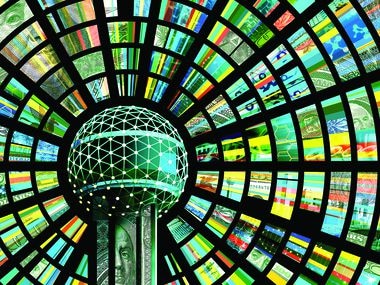