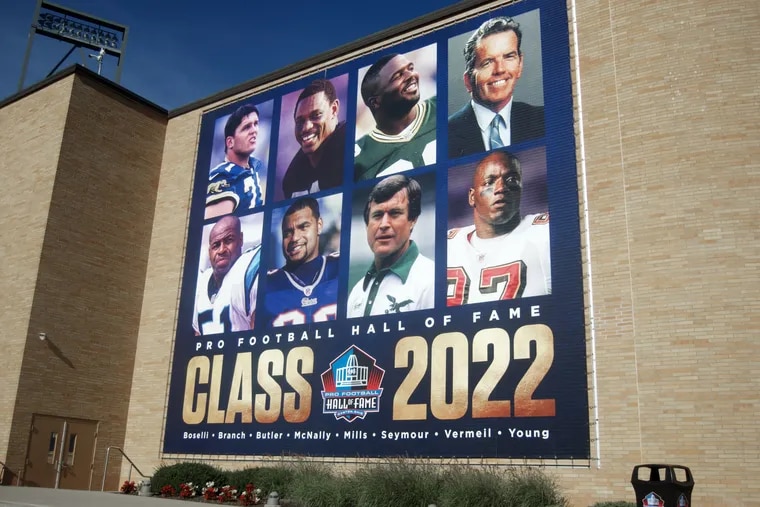 Vermeil will be the last of eight inductees enshrined during a noon ceremony at the Hall of Fame in Canton, Ohio, which will air live on ESPN and the NFL Network. There, Vermeil’s bust will be unveiled, and the emotional head coach will attempt to compress his thoughts and feelings into an eight-minute speech.

“I’m hoping by being last, they might give me a minute or two if I run over,” Vermeil said during an interview on 94.1 WIP Sunday with Glen Macnow and Jody McDonald. “It is what it is, and I couldn’t be more grateful than I am.”

» READ MORE: Dick Vermeil’s Hall of Fame coaching career was fueled by a fire that nearly burned him

Also entering the Hall of Fame on Saturday is Philadelphia native Art McNally, who will be the first NFL referee inducted and is known as “The Father of Instant Replay.” He put in place rules that modernized the game and developed the standards the league uses to grade its referees.

“My philosophy has always been, ‘Get the call right,'” McNally told the Daily News in 1990. “If it takes a review, fine. Just get it right.”

Here’s everything you need to know to watch or stream the 2022 Pro Football Hall of Fame enshrinement ceremony:

The class of 2022 induction ceremony is scheduled to begin at noon Eastern, and will air live on ESPN and the NFL Network.

The ceremony will stream live on the ESPN app, though it’s only available there for cable subscribers. Fans can also stream the ceremony on a host of services that carried out either network, including FuboTV, Hulu With Live TV, DirecTV Stream, Sling TV, or YouTube TV.

Over on the NFL Network, coverage begins at 11 am, with Rich Eisen (who recently signed a new deal with the network) joined by Hall of Famers Kurt Warner and Michael Irvin. Steve Mariucci, Willie McGinest, and Steve Wyche will also join the coverage.

» READ MORE: Here are some tips if you’re thinking about driving from Philly to the Hall of Fame

Here are this year’s inductees, in the order they’ll speak:

Mills and Branch are being inducted posthumously — Mills by his widow, Melanie, and Branch by his sister, Elaine Anderson. Mills died in 2005 after battling intestinal cancer, while Branch died in 2019 at age 71.

McNally, who is 97, prerecorded a speech that will air while he is honored. Shannon O’Hara, his granddaughter, will give a speech on stage when his bust is unveiled.

With this year’s class, there are 362 players, coaches, and administrators who have been voted into the Pro Football Hall of Fame.

The Hall of Famers representing the Eagles are:

The busts for this year’s inductees will be added to the gallery on Sunday, the day after they are unveiled.

Vermeil wears his heart on his sleeve, but he stored his NFL secrets in massive binders.

One is his offensive notebooks from the 1982 Eagles season features about 700 pages of formations, plays, and definitions of players were expected to learn. It also includes touches of Vermeil’s connection to the team, like a heartfelt introduction dedicated to six former players and coaches who took jobs with other teams but “exemplify what it means to be an Eagle.”

Vermeil donated other playbooks, including a 2005 Kansas City Chiefs offensive binder and his playbook while head coach of the then-St. Louis Rams. Vermeil was also the first special-teams coach in NFL history, and on display is his playbook from the 1969 Los Angeles Rams.