Kirby Mizrachi is a young woman who narrowly survived a brutal attack years before Shining Girls gets underway, and all she wants to do is go about her life with some degree of normalcy. But the Apple TV+ thriller based on Lauren Beukes’ novel quickly establishes that a normal life will prove elusive: Adding insult to literal injury, the years since Kirby’s assault have brought on shifts in her reality.

This manifests in Kirby’s never being certain if the apartment she leaves in the morning will still be her home when she comes home at night, whether a pet cat or dog will greet her at the door, whether she’s single or married… you get the horrifying gist

But it turns out that altered reality is the least of Kirby’s problems, though it’s deeply tied to her biggest one. Apple TV+ released Shining Girls‘ first three episodes today; read on for a recap of Episode 1, “Cutline.”

‘A FILLY DOESN’T DRAW A CROWD’ | In 1964, a little girl plays on a stoop. A man (played by TURN: Washington’s Spies‘ Jamie Bell) approaches and mentions that his knee always hurts when it rains, but she notes that it’s not raining. Hes that she’s made a mini circus out of pieces of junk, and something is observing buzzing underneath an overturned mug. It’s a bee, and when the man lifts the cup, he grabs the insect. “First we find its shine, and then we take it away,” he says, plucking the wings off the bee. Then he gives the girl a horse figurine, saying cryptically, “A filly doesn’t draw a crowd, but she’s easier to break.” He asks the bewildered girl to hold onto the figurine until he comes back, but she says no. “You’ll take it,” he says serenely. “You always do.” Just before she goes inside, she does, indeed, grab the horse.

Years later, a woman we’ll come to learn is named Kirby Mizrachi (played by The Handmaid’s Tale‘s Elisabeth Moss) is in an apartment, writing in a journal. A cat walks into the room and she writes, “One cat — Grendel” in the book. We soon learn that Kirby lives in Chicago with her mother (played by Private Practice‘s Amy Brenneman), she works at the Chicago Sun-Times newspaper as an archivist, and she’s about to move to Florida.

Odd things happen to Kirby. She arrives at work to see that the desk she thought hers is now inhabited by a co-worker, while hers is in a completely different spot — and everyone acts like that’s how things have always been. And at night, a dog busts into her bedroom… and his ID tag reads “Grendel.” She writes in her journal, “Grendel is my dog.” (If you’re confused, don’t worry — you’re supposed to be.)

MEET DAN | We’ll leave Kirby for a minute to meet Dan Velazquez (Narcos‘ Wagner Moura), a reporter at the Sun-Times who’s recently returned to the paper after having some troubles in his past. He’s working a story about Julia Madrigal, a woman who’s been missing for two years but who just turned up, dead, in a tunnel under the city. Julia was a social worker, and the police suspect that one of her former clients killed her.

When Kirby finds out about Julia, she goes to the police station. As she and a detective talk, several points are laid out. Kirby isn’t her real name; she changed it six years ago, after she nearly died from a random attack by a man who was never caught. The detective tells Kirby that there were similarities between her assault and Julia’s, but looking at mugshots doesn’t help, because Kirby never saw her assailant’s face. All she has to go on is the sound of his voice, which she remembers from “when he called me a whore.”

When Kirby happens to see some of Dan’s notes at work, she gets the address of the main suspect and visits him with a knife in her hand. But the man’s accent makes her realize that he’s not the one who hurt her. She runs out of the house and runs into Dan, who takes her to a diner and tries to discern why she wants to poach his story. But she explains that “I was cut up like Julia,” and the admission makes her cry a little.

Dan brings Kirby to see the medical examiner who dealt with Julia’s body. As Kirby is sharing her horrific story — her attacker cut her with a knife, leaving giant scars criss-crossing her torso, some of her intestines were removed, and he left something inside her — all of a sudden Kirby looks up and the kindly female ME has become a man… though Dan is still there, and both men are looking at Kirby like she’s insane when she demands to know what is going on. She flees, heading home, where she tries to talk to her mom about what’s going on. “Everything is like always, and then it’s not,” she says. “Things change. They’re not how I left them. Nothing is where it should be, and I don’t recognize it anymore.” Small changes become bigger, she elaborates, but her mother either doesn’t want to or can’t truly hear what Kirby is saying. All she counsels is that Kirby change her plans to move south: “If you want to stop feeling this way, you better figure it out right here.” 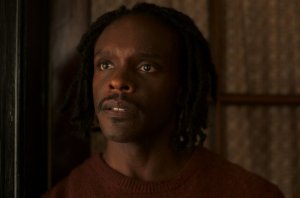 HI HONEY, I’M HOME | So Kirby steels herself and tells Dan to have the medical examiner look inside Julia, to see if the murderer secreted anything away in her body. Then she goes home… and her key doesn’t work. In fact, someone else is living in her apartment, and he doesn’t know what Kirby is talking about when she says that she and her mother live there. Out of sorts, Kirby thinks to check her wallet, where her driver’s license informs her that she now lives in Apartment 3N, not 2B. Her key works in the lock for 3N, and Grendel is back to being a cat. But there’s one huge surprise: Her co-worker Marcus, a photographer at the paper (played by Gotham‘s Chris Chalk), is there, and though he’s only been a casual work acquaintance in the realities we’ve seen so far, now he rushes over to embrace her and wonders if she’s OK. 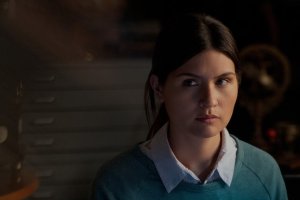 HE STRIKES AGAIN? | Elsewhere in town, at the planetarium, an employee named Jin-Sook (Hamilton‘s Phillipa Soo) prepares to give a talk and notices a wingless bee carcass on her paper. Later, as she’s smoking on the roof of the building, the door closes behind her and she’s trapped. She notices a red umbrella lying on the edge of the roof, but no one else seems to be up there. Then it starts to rain, so she opens the umbrella to stay dry.

At another time, Jin-Sook watches the planetarium show but stays behind after the crowd leaves. The same man we saw talk to the little girl in 1964 approaches her, calling her “Jinny,” but she doesn’t know who he is. “You still don’t recognize me?” he asks, a little disappointed. She says she doesn’t know him. “Not today, I guess not,” he says before she leaves.

One night, while Jin-Sook is using a large telescope, the mysterious man attacks her. She fights back. He has a knife.

Now it’s your turn. What did you think of Shining Girls‘ premiere? Grade it via the poll below, then hit the comments with your thoughts!