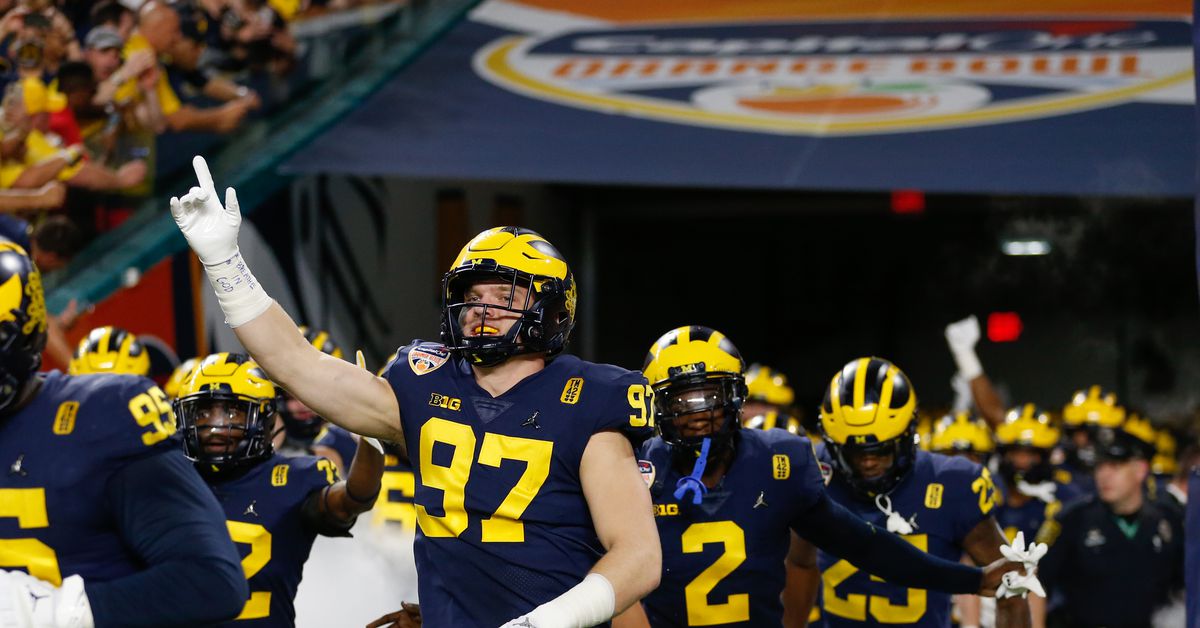 We’re coming off Victors Weekend, which finally produced a commitment for the first time in nearly three months. While many Michigan targets are setting their decision dates for early July, it looks like it’ll be a couple more weeks before we get some fireworks on the trail.

In the meantime, we have a few reactions from visitors this past weekend.

One of the handful of top-100 prospects on campus was 2023 Robbinsdale Cooper (MN) four-star edge Jaxon Howard. 247Sports’ Allen Trieu caught up with Howard to get his thoughts on the visit ($).

“I think the biggest takeaways from the visit were definitely the way they view me on their defensive scheme,” said Howard. “Not only that but my smaller meetings like academic presentation and the weight room presentation gave me good insight.”

In a smart move by the staff, they also held their Big Ten Championship ring ceremony on Friday, which Howard attended.

“I loved the ceremony, and the group of men and women who deserved those rings were so happy,” Howard said. “And when I met Aidan Hutchinson, man that’s a big dude, he’s someone I look up to and want to be dominant like him.”

Overall, Howard said the official visit “definitely raised my opinion” and called it an “amazing experience.”

Howard heads to Miami for his official visit this weekend. Some believe the Hurricanes are slightly ahead in this race, so Michigan will have to fight to stay at the top of his mind. Howard will make his commitment on July 1.

“It went really, really well,” Jagusah said. “I got to get around some of the players and get a feel for some of the offensive line group. I liked getting to hang out with coach (Sherrone) Moore. We cracked some jokes. He’s a really fun coach. I had a lot of fun.”

Of course, Moore also pushed winning the Joe Moore Award last year, given to the best offensive line in college football. That and the ring ceremony showcased Michigan’s success to Jagusah.

“I really liked watching them last year,” Jagusah said. “I liked the way the offensive line played and how the offense ran in general. It was fun to watch. They seem excited to do it again. It was really impressive seeing the ring ceremony. They really have it going and have set a standard.”

Moving ahead, Jagusah said Michigan, “left a great impression on me” and, “they are a big school for me.” He had his official visit to Notre Dame immediately following the weekend and will try to make a decision before his season starts.

Michigan has been picking up steam with 2023 Covenant Christian (TX) four-star defensive lineman Enow Etta even before he made it to Ann Arbor for his official visit. Coming off the visit now, he spoke with The Michigan Insider’s Brice Marich to give his thoughts on the trip, and maybe even on who he’s thinking of picking ($).

“It was great. I got to tour a lot of stuff and talk to a lot of people. I did exactly what I wanted to,” Etta said.

Etta said it, “was great. I got to tour a lot of stuff and talk to a lot of people. I did exactly what I wanted to.” He also got to spent time with defensive line coach Mike Elston and about the plan for him if he were to commit.

“We talked about the plan for me and I’m all in,” Etta said about his meeting with Elston. “Can’t say too much now, though.”

Etta will still make an official visit to Stanford next weekend, who are a major contender because of their academics. But Michigan has been picking up Crystal Balls for Etta lately and could be the choice when he decides this summer.