Moving right along. If you missed the party, the portly yellow ball celebrated his 40th anniversary two years back, but has kept his Big 40 celebration going for an indeterminate amount of time, really. So now, with Pac-Man hitting 42 years old—you don’t look a day over 30, buddy!—Namco made a plethora of new announcements, like a Fortnite collab, following its epic Comic-Con celebration*. More on that below. But that’s all to say: it’s a great time to be a Pac-Man fan. Namco dropped a remake of the 1999 classic platformer, Pac-Man World, this past Friday. Rather fittingly, the game is called, PAC-MAN WORLD Re-PAC. So listen up. You Pac-rats out there have a lot to waka-waka up.

I grew up with the original Pac-Man World, where you have to platform and puzzle-solve your way out of six stages, gobbling up pellets along the way. Like many other Pac-maniacs, have repeatedly attacked Namco on Twitter, begging for the return of our sweet, hungry boy. I’ve been yearning for a true-to-form puzzle-platformer—and PAC-MAN WORLD RE-PAC is it. I first played an early version of the game back at Comic-Con, which felt polished, smooth, and just plain fun. Sure, there may be some rose-colored glasses plastered on my face, given my nostalgia for anything and everything Pac-Man. But the physics felt great, the puzzle-solving was far deeper then I remembered, and all I wanted to do since I played the title was get my hands back on it. Thankfully, PAC–MAN WORLD RE–PAC is now available on Xbox consoles, Playstation 4 and 5, and Nintendo Switch.

If you’re looking for more Pac-action (Paction?!), snag Pac-Man Museum +which has a massive bundle of classic Pac-Man games, plus an added Animal Crossing-esque arcade designer. Beyond that, Pac-Man seems to just keep popping up everywhere, so rest assured, you’ve got plenty to satiate the Pac-Man Fever.

*Not to brag, but… Gamer Zone attended the Pac-Man party at Comic-Con—yes, there was a Pac-Man party—which had Pac-cocktails and Pac-pizza, the latter of which was just missing triangles. I still need to find what they did with all the mini slices. 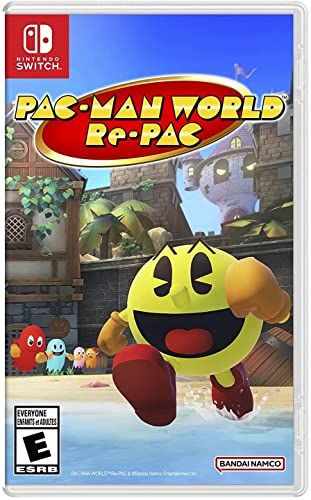 Cameron Sherrill is a designer and writer for Esquire.com, where he covers technology and video games.