Exploding Kittens – The Game It will launch on Netflix next month, and retains the same classic gameplay where players draw cards aiming to avoid the titular Exploding Kitten.

Future cards and game mechanics will be themed around the series, an adult animated comedy, which will follow in 2023, and sees the eternal conflict between Heaven and Hell reach epic proportions when both God and the Devil are sent to Earth – in the bodies of chunky house cats.

It will feature the voices of Ellis (Rush), Abraham Lim (The Boys), Lucy Liu (Shazam), Ally Maki (Wrecked), Mark Proksch (What We Do In The Shadows) and Sasheer Zamata (Woke).

“The co-development of a game and animated series breaks new ground for Netflix,” said Mike Moon, Netflix head of adult animation. “And we couldn’t think of a better game to build a universe around than Exploding Kittensone of the most innovative, iconic and original games of this century.”

Other mobile games launched by Netflix include: Stranger Things: 1984 and Stranger Things 3: The Game from games studio BonusXP; Shooting Hoops and Teeter Up from US-based Frosty Pop; and Card Blast from Amuzo and Rogue Games. 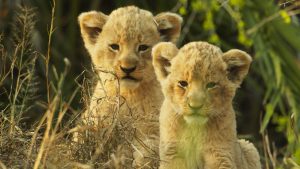 A walk on the wild side

From Antarctica to Alaska, and from Sri Lanka to Namibia across a total of 16 countries, the series follows their character-driven adventures from birth, through the developmental milestones that shape their future, to the pivotal moments where they come of age.

Wild Babies is executive produced by Stephen Dunleavy and Charlotte Crosse, while Beth Brooks serves as showrunner. It will launch on Netflix worldwide on 5 May.

“Wild Babies will resonate with a broad family audience, with heart-warming stories that will feel relatable to viewers around the world” said Humble Bee Film’s Crosse. “Delivering an ambitious wildlife series during a global pandemic certainly presented new challenges for our team, but what we hadn’t anticipated were the creative opportunities and innovative approaches that also emerged.”