Welcome back after a very, very long break, sun seekers! Inevitably, things like the “postseason”, the “playoffs”, the “Draft”, and “Free Agency” get in the way of delivering to you, the more relaxation-minded fan, the thing you and I wait all year for — NBA Summer Vacation Watch.

If you’re new here let me illuminate the aim of this column, like those old reflective screens people used to suntan themselves with. NBA SVW, in its glorious 5th season, concerns itself with gathering up like so many precious seashells the offseason activity of your favorite hoopers only as it relates to what they’re doing outside of the gym. Preferably on, in, around, or speeding across water. Palm trees? Wonderful. Shorter shorts than usual? Fantastic. Trips to Europe? Si/Oui! Sunglasses? A must. At the end of the season, like the “real” NBA season, a SVW MVP title is awarded to the person who spent the most time strictly enjoying themselves.

So, because of the gap from where the season ended for some, when the Finals wrapped up, and where we’re pulling up a beach lounger here, we’ve got some catching up to do. It’s possible that you’ll recall some of these getaways from when guys first started to free themselves from the shackles of the grind and instead get themselves into board shorts, back in early June. This is a roundup edition, so if you enjoyed them then you’ll enjoy them again and if you haven’t seen them, slather on the sunscreen and let’s dive in.

Donovan Mitchell wasted no time whatsoever to get his ass out of Utah and plant it firmly on a beach, and also on a boat. While we are currently looking at a big question mark as to where that same butt is going to be going when a new season dawns, at least we know he made up for the vitamin D deficiency that comes from living in Salt Lake City for a good chunk of the year. You know when someone has packed matching shorts to shirt sets on vacation that they have been thinking about wearing said-set for QUITE SOME TIME.

Rating: Mitchell holding that plastic tube/hose with his eyes closed and actively daydreaming might as well be the Jerry West NBA logo equivalent of this column.

Well, well, well, if it isn’t the former coworker of this column’s new iconic logo. Say what you will but the truth is Rudy Gobert deserves a vacation, too, so he took one right around the same time as Mitchell to the French West Indies. Once there, he wore highlighter orange shorts and pretended to look into the far distance (a trade was on the horizon) and got up close and personal with the big dead fish his chef brought him. He also waxed poetic about this urchin he presumably also stole from the sea.

Rating: Gotta store up that sun for the long winters in Minnesota, my man.

D’Lo is good at vacations, and has been for some time now. Case in point, doing the city part of a vacation first, like he did in Paris, checking the Louvre and the Eiffel Tower off the list before heading over to the Amalfi Coast to cruise around on a yacht by day and eat pasta (or, it looks like, a single peach?) by dusk. A lot of people don’t want to admit it, but that’s the summer vacation grindset.

Spicy P is ALSO extremely good at vacations, and my working theory is because he’s one of those classic “save up all my vacation days and don’t tell anyone in the office where I’m going and then show up 3 weeks later with a sick tan and a sated smile.” First, he chilled out on the dock over waters so turquoise I’m not sure the color exists in our collective common knowledge yet, then he took a bubble bath, then, to get some activity in, he took a rental bike around the extended dock of this tropical hut compound. I think This is the Maldives, but I also think we’re not really supposed to know!

Rating: I wonder if the bike rental place charges by the minute or per wood plank you rattle over.

This dude’s had a busy offseason! Kuzma first popped up in Rio de Janeiro, Brazil, wearing sunglasses he implied he overpaid for (who hasn’t been there). Next, he was seen hanging around in Havana, Cuba, with a hat I absolutely know he picked up at the airport. A few weeks later, he was in Germany, sipping on some suds, playing golf, and wearing pants that look as relaxing as the couch they were cut from. Finally, he was in Paris, enjoying espresso martinis and some excellent linen shirts.

Rating: Kuz gets a lot of undue heat for “seeming annoying”, because he like, dyed his hair once, but quite frankly he seems like a great person so go on vacation with.

Rudy was in Milan, where this guy brought him the tallest bottle of something in the world, then took a minute to take in the view of Lake Como, and finally headed to Paris for Fashion Week. Rudy’s gotta go on more vacations, but we’ll take what we can get.

Rating: Try drinking out of a regular sized bottle and not feeling like a complete fool, now.

The new World Champ went to jolly old London innit and had someone very patient with him to take his picture doing all the important things: cramming himself into an iconic red phone booth, shopping at Harrods, chilling on some monuments, a weird angle photo with Big Ben, showing up to see the Queen, and really driving home how much he would’ve had to contort to get into that phone booth the first time. 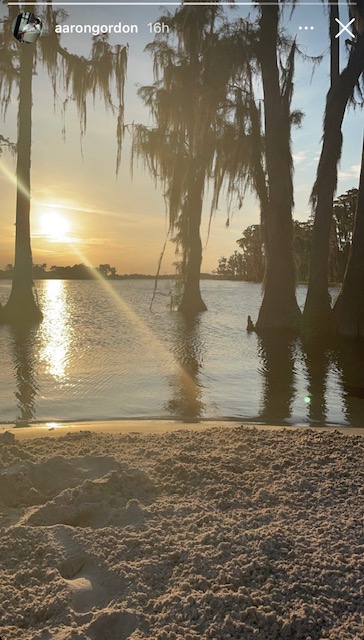 This doesn’t really count as a vacation but if Aaron Gordon doesn’t return to his home deep in the swamp every summer, we all suffer for it. 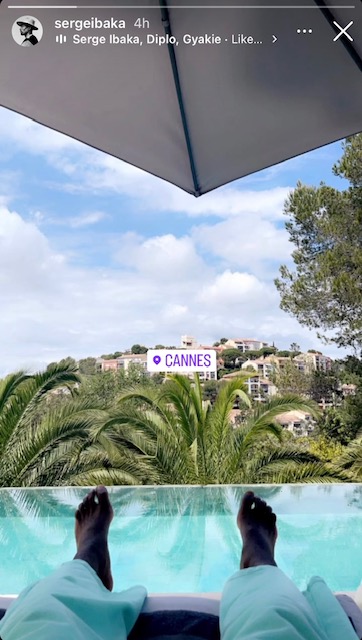 Serge has and is still busy having a great summer, but we’re here to catch up so first up we have our man right where we like to see him: lying down in front of a pool in Cannes. Then, he took a little jaunt to Barcelona with the summer fit of your dreams to sip on some icy cold sangria in a cup that looks miniature in his giant, manicured hands, but is a normal adult portion.

A little while later and you’d be wishing for that drink, because a thirst trap happened.

Is he dancing with a Dominos pizza box? Why are those shorts only baggy at the pockets? Did he just use that snorkel set in the lower left hand corner or is it for ambiance? Lots of questions and yet this dance, captured forever, has robbed us of speech and critical thought.

Rating: Sorry I missed you call, for the rest of my life, I was staring at this video. 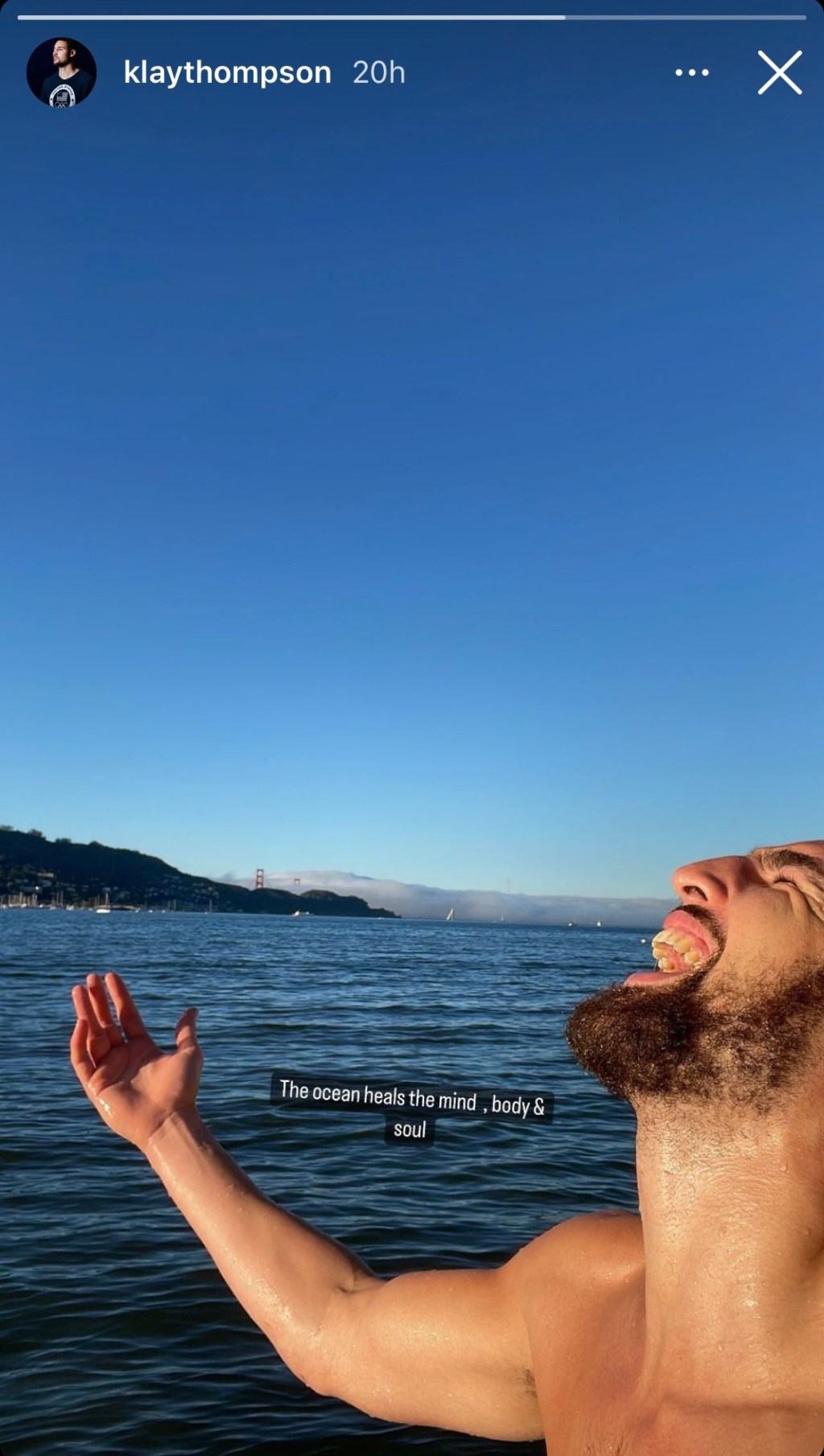 This was the season where we saw Klay’s gradual transcendence into merman, and this is the summer that seals it, of that I am sure. 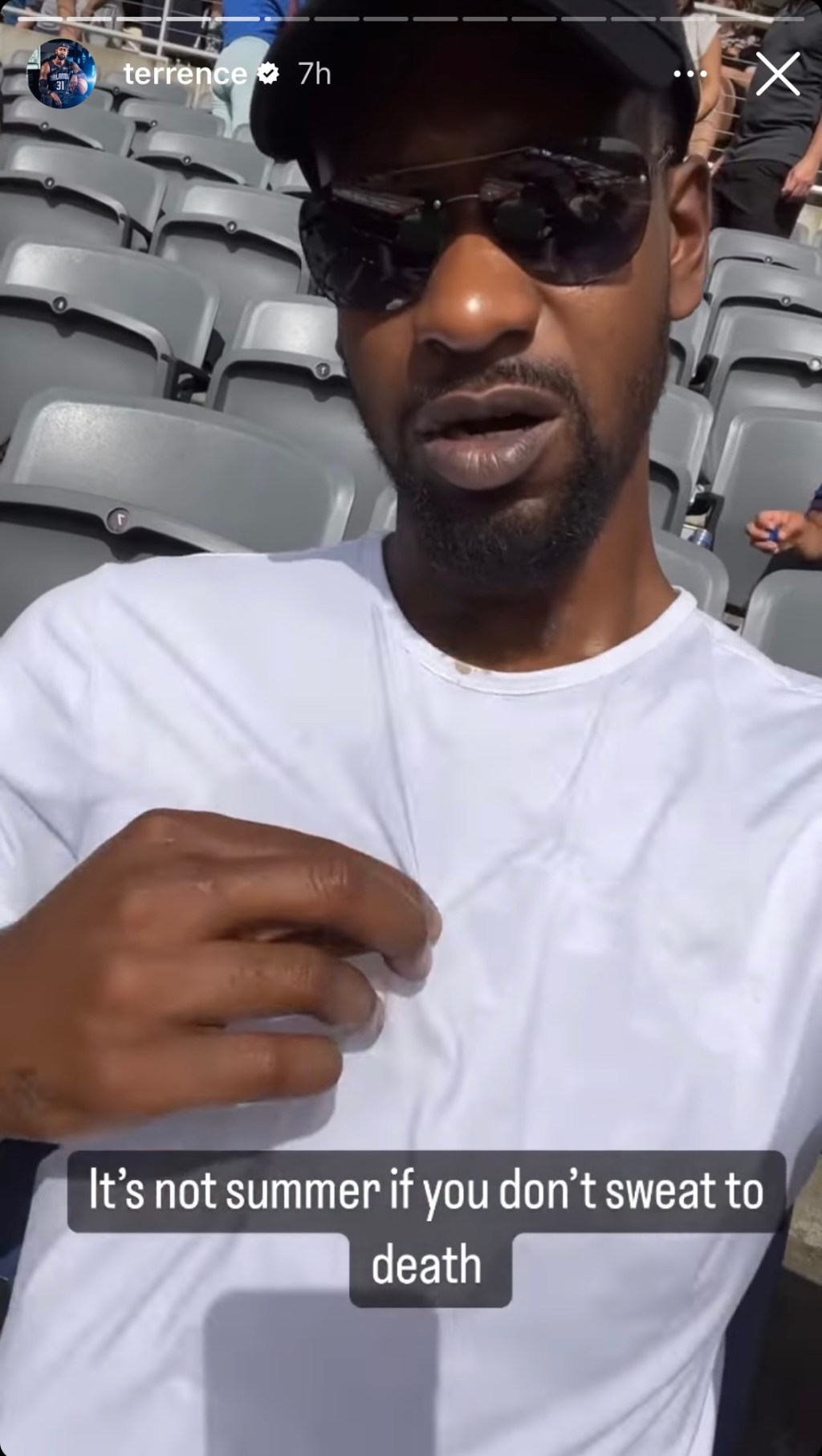 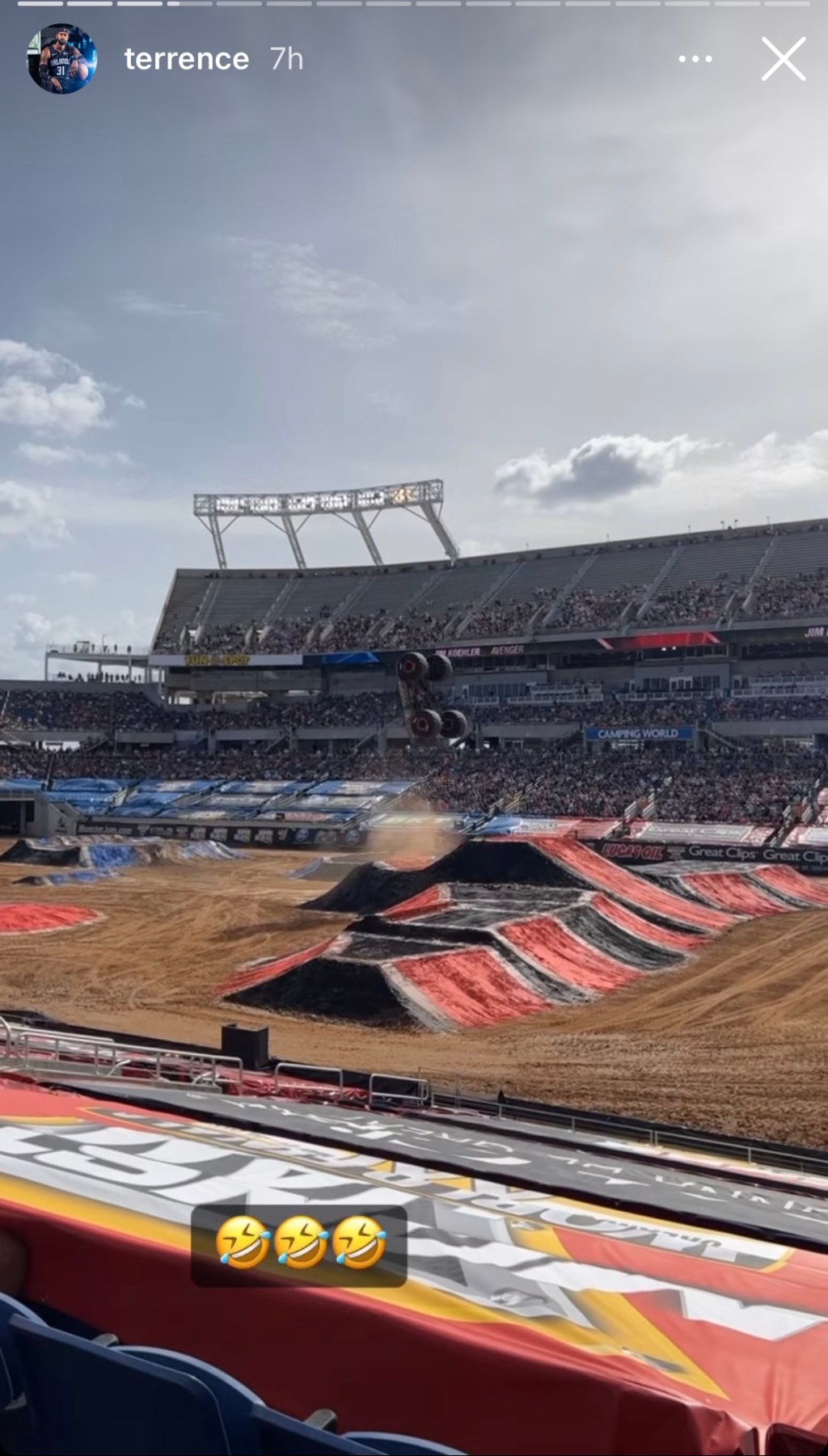 T Ross went to Monster Jam and got absolutely cooked.

Rating: I love a person who respects that summer doesn’t really start until you get your first heatstroke.

Nurk typically takes his summers the way most beloved eastern Euro dudes do, which is chilling in the countryside and hanging out with their family, eating home cooked meals and playing basketball on overgrown courts on some beautiful cobbly mountainside. So, it was nice to see him take a trip he looked pretty stoked about, a trek through the Dubai desert on a camel.

Rating: A SVW first, a hooper riding on an animal that is actually proportioned to them. 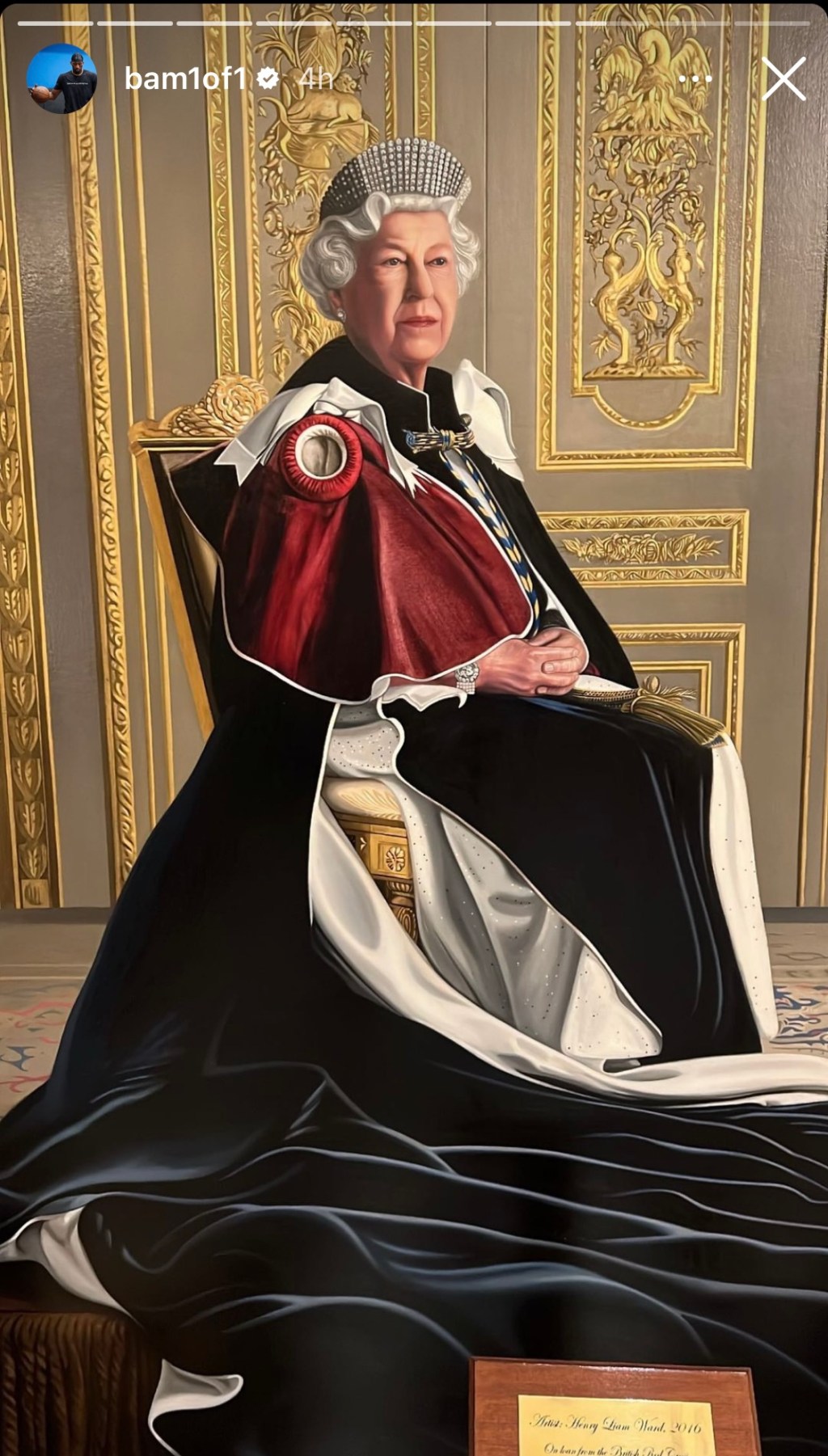 This is the only picture Bam shared on vacation.

Rating: What does he know? 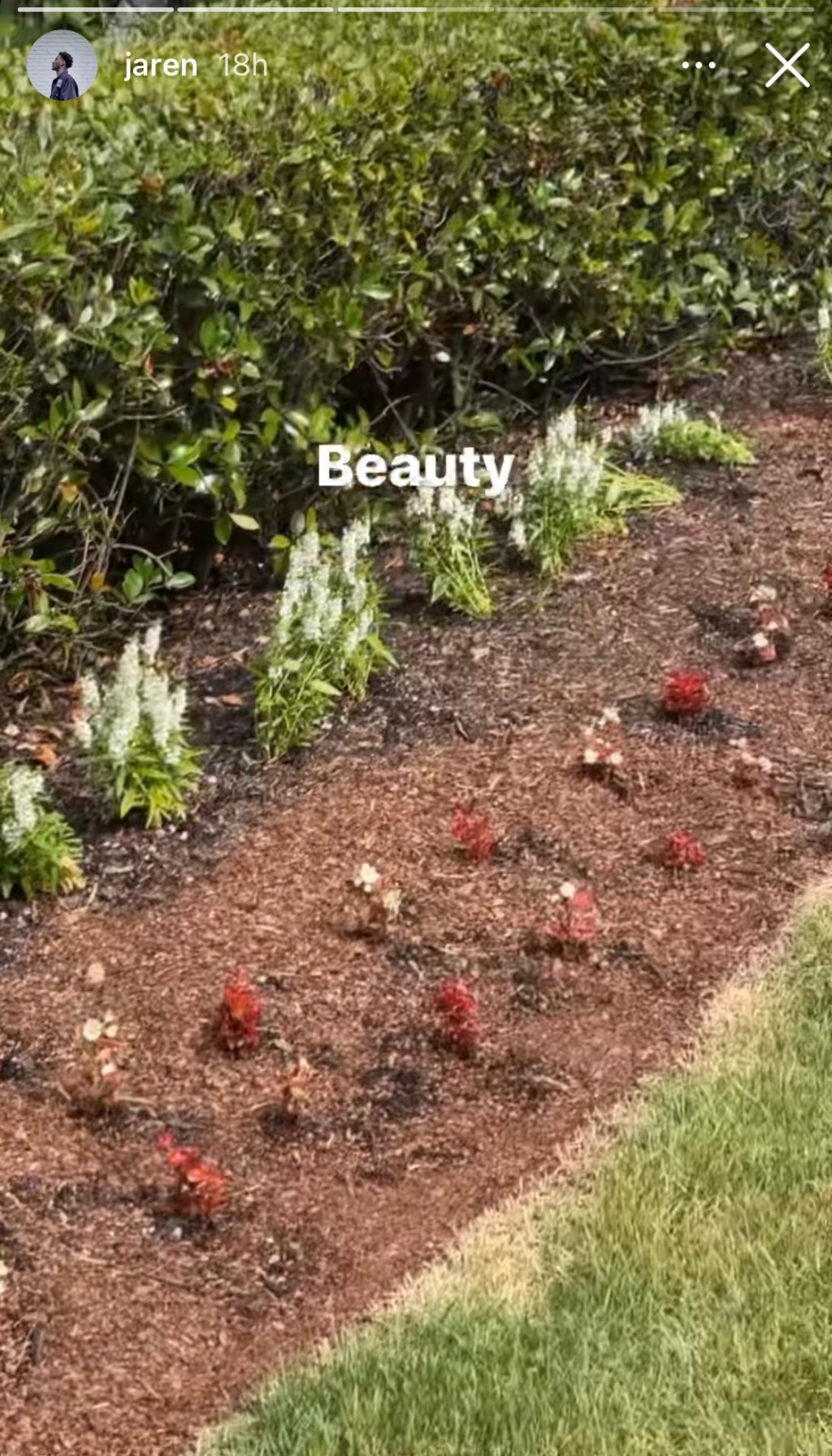 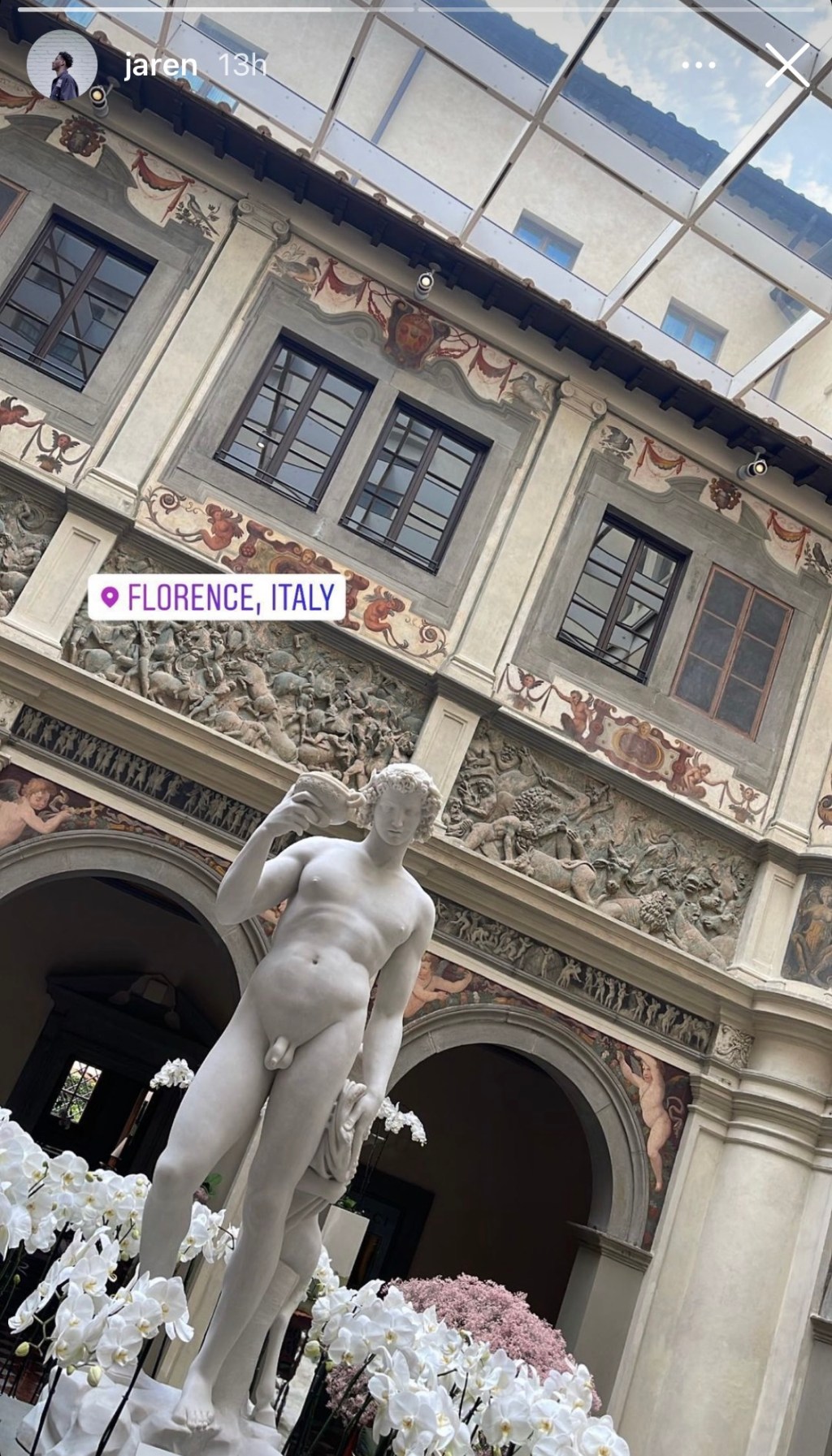 Jaren went to Milan, did Paris Fashion Week (not pictured, but I am telling you), but before that he really appreciated his garden.

Rating: Staycation into vacation is the SVW equivalent of a dark horse Championship contender.

Dipo also spent some time with a camel, this one in Cabo, though he didn’t seem quite as relaxed about it.

Rating: I’m glad he got all the camels best angles, though.

You guessed it, this is the guys riding around on equines and ungulates section of the column. Bazemore went for a trail ride in Colorado with Harrison Barnes (who wore appropriate headgear) and Justin Holiday.

Rating: They all had great form and a great time.

Holiday really got into the same trip, shooting arrows and chopping wood.

This is just a bonus video of Justin Holiday feeding a giant Shire horse that’s both very soothing and very funny when Harrison Barnes watches the exaggerated height of the beautiful gentle giant.

Rating: Harrison Barnes, who was also on this vacation, literally has no personal public record of it.

More than the Solstice, seeing Dejounte Murray go down a waterslide was the start of the summer for me, and I think we should make a formal amendment to the seasonal calendar (sorry, druids!) to make it official.

Rating: No wonder he’s a shooting guard, look at the steadiness of that camera. 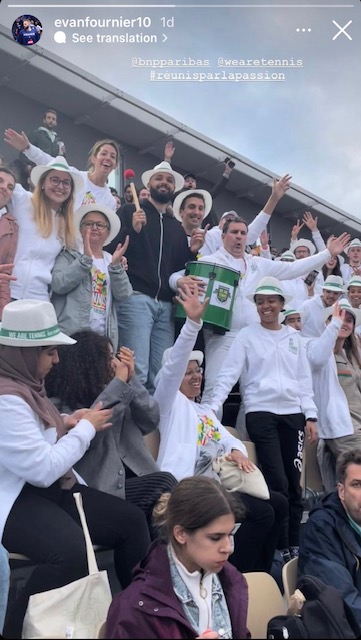 Fournier was at the Indian Wells Open banging a drum in the stands.

Rating: It’s good for this guy to get his frustrations out, the only drum the Knicks let anyone beat is the amnesia’d belief that this will be their year. 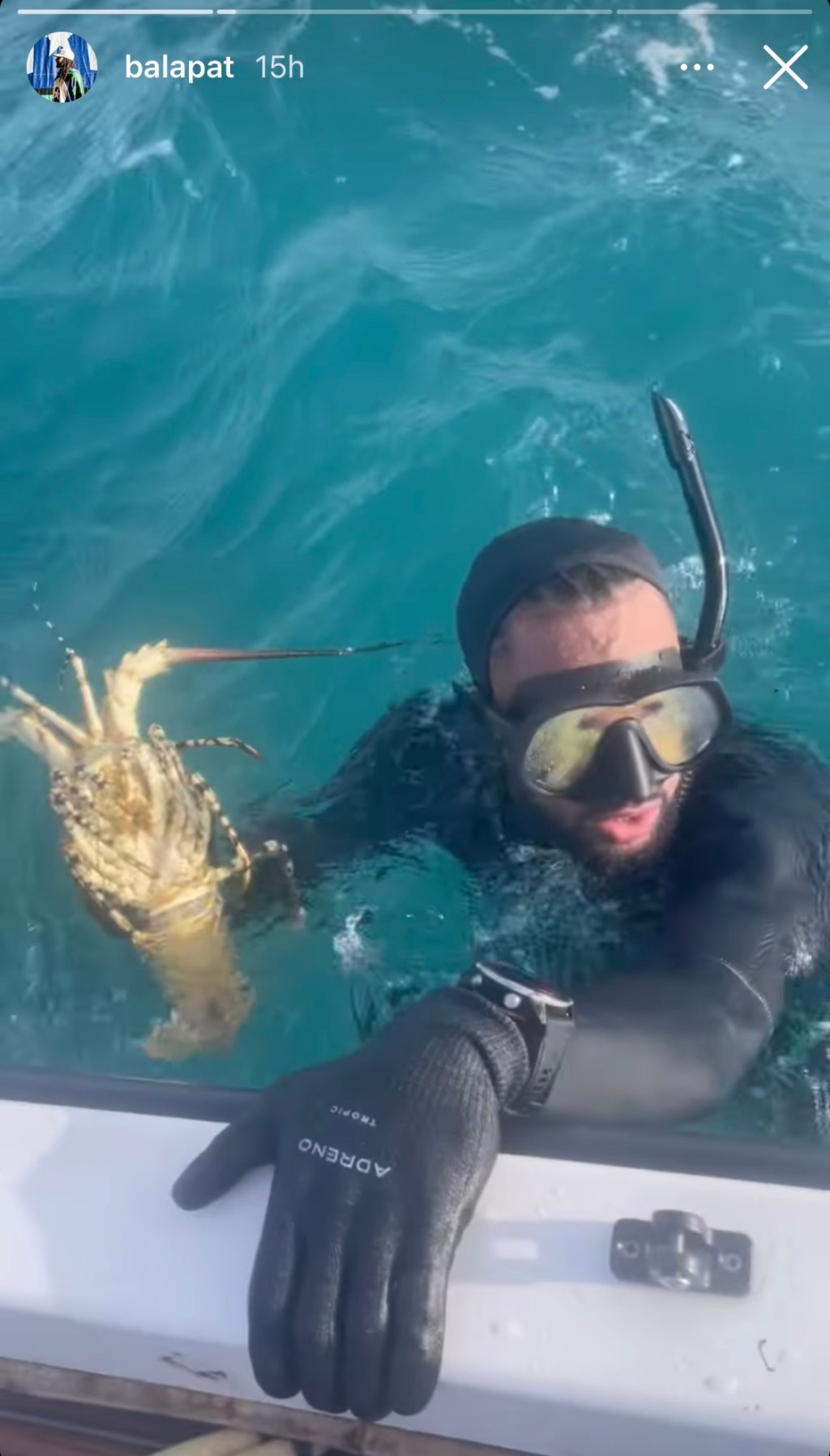 Here we have former SVW MVP Patty Mills freediving off the Australian coast and catching some lobster with his bare hands. All in a day’s summer vacation for the reigning champ!!

Rating: Once you win SVW MVP, you never lose. 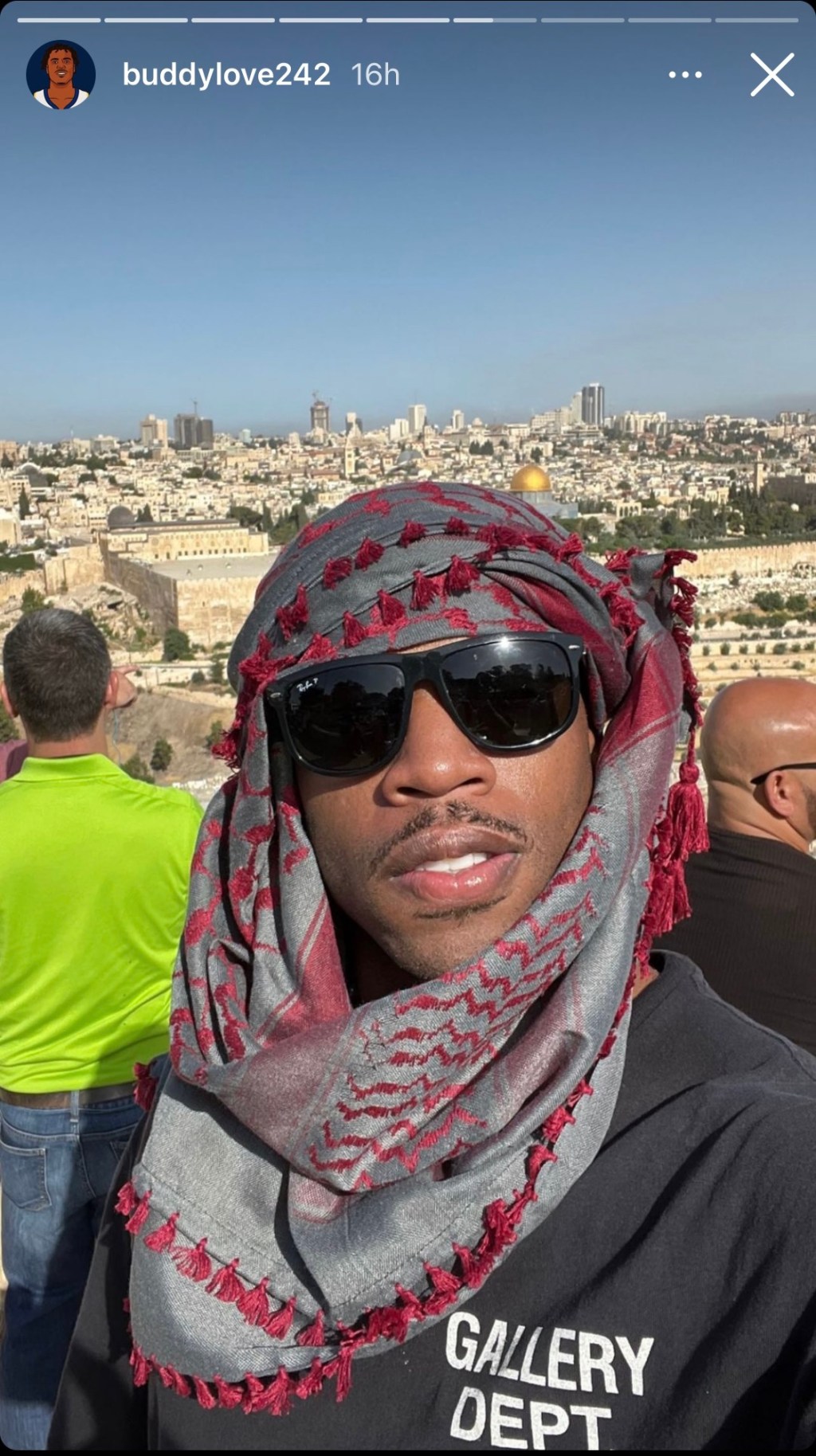 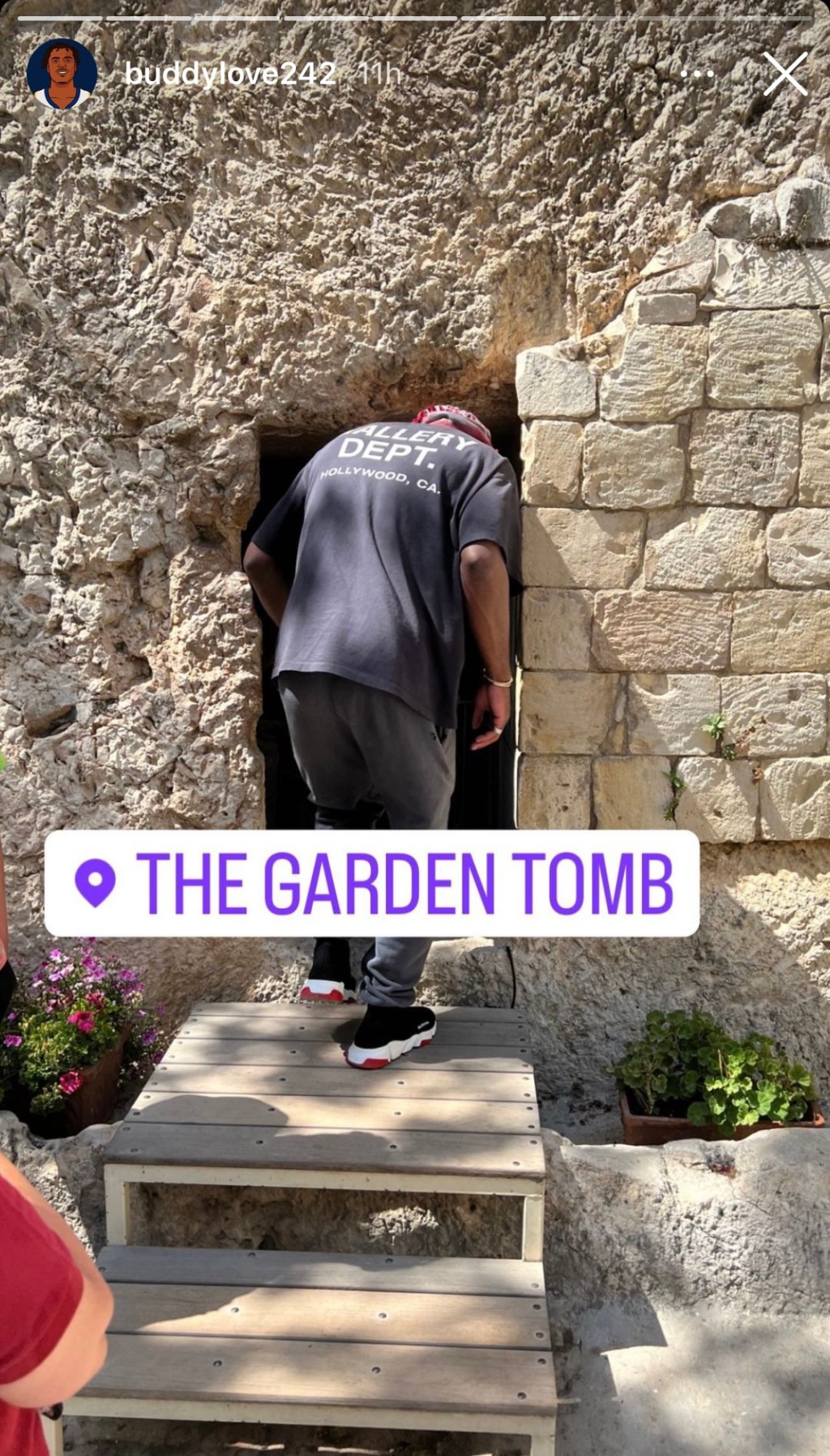 Buddy was tromping around some tombs early on this summer. That’s not a euphemism for being traded to the Pacers.

Rating: Buddy usually just works out on the beach in his native Bahamas all summer, the only person who has ever been granted a pass for the foundational SVW rule that working out on a beach does not count as enjoying the beach. 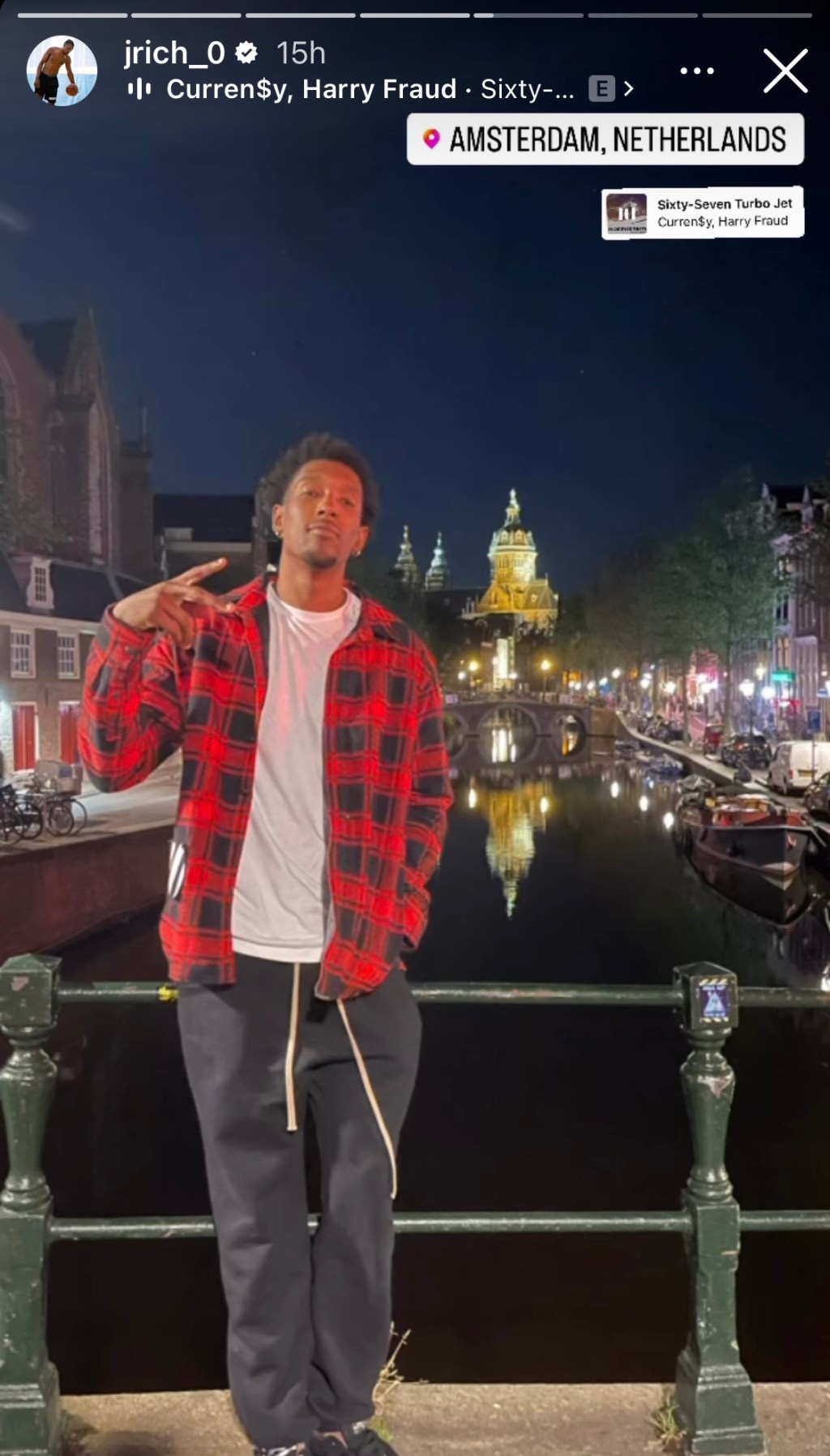 Josh has also had a busy summer. He rode a rollercoaster with friends at Magic Mountain (as a person who unfortunately rode many rides here before being told by a friend this park is the explicitly scariest one in southern California, J Rich, I applaud you), then he took off to Paris for Fashion Week, and made a quick pit stop in Amsterdam to chill by the river at night.

It’s hard to think how Dwight doesn’t come out of this trip unleashing some ancient curse upon the world.

Rating: But maybe it gave him some thematic ideas for another return to the Dunk Contest? So, worth it.