Murals celebrating the tenth anniversary of the Deferred Action for Childhood Arrivals (DACA) program have been vandalized at two branches of the Denver Public Library.

In early June, murals marking the tenth anniversary of the DACA policy were installed at the DPL’s Virginia Village, Schlessman Family, Eugene Field and Valdez-Perry branches, as well as around Boulder. Created by artist Edica Pacha, they’re part of Motus Theater’s UndocuAmerica Monologues project, which “aims to interrupt the dehumanizing portrayals of immigrants by encouraging thoughtful engagement on the challenges facing the undocumented community and the assets bring immigrants to our country,” according to the Boulder organization’s website.

When Donald Trump was elected president in 2016, Kirsten Wilson, Motus artistic director, decided to develop the UndocuAmerica series, with undocumented immigrants relating their experiences in monologues during regular evenings at the theater. 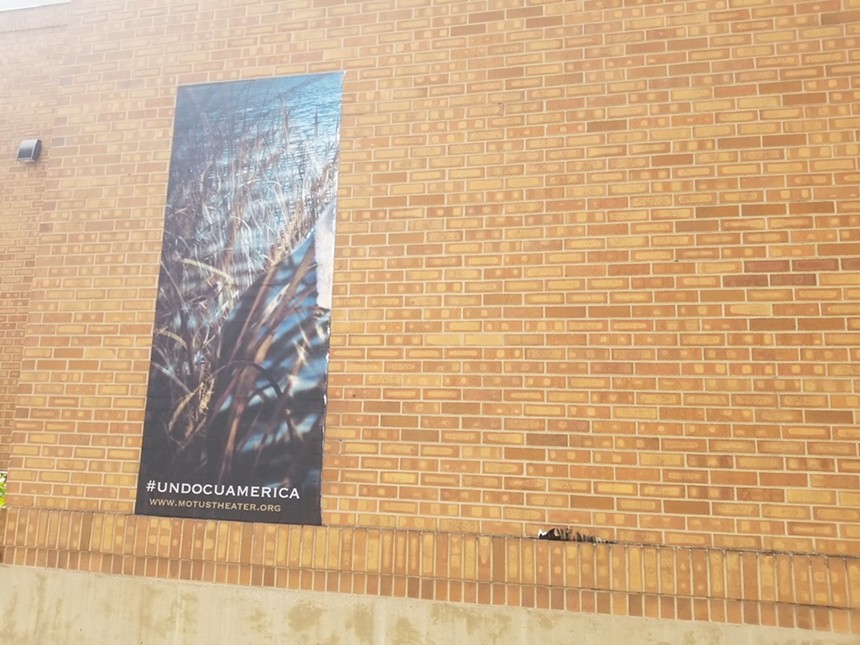 This mural at the Eugene Field branch was ripped in half this week.

The murals, which were funded by Denver Arts and Venues through a PS You Are Here Grant, were designed to bring more recognition and awareness to what it means to be undocumented in the United States. Each mural is a photograph of an undocumented person in Colorado; A QR code opens to a story about that person and their experience being undocumented.

“When we were first approached by artist Edica Pacha about the possibility of having murals feature undocumented leaders, we got really excited. It’s not often that people in the undocumented and BIPOC communities are displayed in a way that is very empowering, like being on a mural,” says Armando Peniche, the Partnerships and Projects manager for Motus. “My hope is that the impact of having these murals outside the libraries is measured by inspiration and understanding. I am actually one of the people on the murals, and one of my goals is that our undocumented youth and BIPOC folks can see my image and take inspiration from seeing a former DACA recipient with beautiful brown skin featured on a mural.”

The murals were unveiled in time for the tenth anniversary of DACA on June 15. But the QR code on the mural at the Eugene Field Branch Library was torn off almost immediately, according to Olivia Gallegos, communications manager for Denver Public Library, and half the mural was torn off completely a few days later. Part of the Virginia Village mural was ripped off, too; the artist replaced it.

“Doing art with a political nature can push up against uncomfortable conversations, and some people simply have perspectives that do not agree with what is being shared. They will destroy what they do not understand,” Pacha says. “This is why I continue to do art about these themes — to push the status quo…to educate the greater community and bring greater perspective around these challenging issues.”

According to a library employee, soon after the murals went up, the branch received a call from someone complaining that they “don’t believe it’s right for the public to be supporting undocumented people.”

“As welcoming spaces where all are free to explore and connect, Denver Public Library is proud to support our undocumented and immigrant neighbors,” Michelle Jeske, city librarian at Denver Public Library, says in a statement to Westword. “The beautiful murals at four of our branch locations celebrating the ten-year anniversary of DACA, and we are honored to be the home of these beautiful murals that feature the faces and stories of members of our community.”

The acts of the vandal “do not represent the values ​​of the library or of our community at large,” she adds. “We have received a lot of positive feedback from the community about the murals and what they represent. We remain committed to sharing stories and highlighting members of our community.”

Gallegos says that the branches have filed incident reports with their security teams, and that the Eugene Field mural will be repaired by the artist on Friday.

“The reality is that people at the front of the immigration movement are used to these types of attacks,” Peniche concludes. “I wish the person who did this would take the time to have a conversation with me to understand what it really means to be undocumented, and all the challenges that come with it. It’s easy to vandalize a mural and try to rip apart a person’s humanity, but it is more rewarding to pause and breathe and listen to the story of a person who had a different life journey than your own.”