Could Maya Rudolph be television’s new sartorial Villanelle? Or more specifically, could the character she has brought to life this summer on Loot? The comedy, which is currently airing on Apple TV+, stars Rudolph as Molly Wells, a woman who comes into an $87 billion settlement after divorcing her unfaithful tech entrepreneur husband (Severance‘s Adam Scott). When she gets a call from the director of the philanthropic foundation she didn’t even know she had, Molly is soon inspired to channel her vast resources—and too much idle time—into doing something that she believes will be fulfilling, productive, and , most importantly, make for good PR.

Molly’s mansion is the real-life $126 million Bel-Air estate infamously known as “The One.” Pictured here: Her sharp-tongued assistant Nicholas (played by Joel Kim Booster) with her dogs Mary-Kate and Ashley.

Cue the inevitable gaffes of 0.001 percenter delusion. A light satire more Schitt’s Creek than Succession, Loot relishes in its irreverent portrayal of stratospheric wealth and privilege. Molly gets a mega-yacht for her birthday and notes one of its giant indoor pools would be cute for her dogs; the real David Chang is her personal chef, who is tasked with microwaving her burritos; Lamborghinis in every color of the rainbow line the driveway of her palatial Bel-Air mansion, which happens to be the real 105,000-square-foot, $126 million behemoth called The One; she thinks a fleet of Escalades is an appropriate way to roll up to the opening of a homeless shelter. 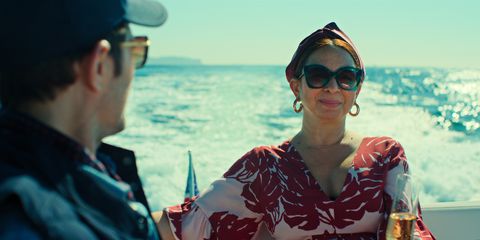 And then there is Molly’s wardrobe. “Maya is so willing to have fun with fashion. She’s just game,” says Loot costume designer Kirston Mann, for whom this is her seventh collaboration with the actress. “She will take risks that not everybody would be willing to do.” Note: the multicolored head-to-toe La DoubleJ outfit her character wears—matching headband and purse included—to whisk her new co-workers off to Miami on her private plane.

That Molly is a member of the nouveau riche jetset who lives in Bel-Air made crafting her sartorial identity all the more interesting. First, she had to look distinctly L.A. rich. “I’d say New Yorkers are a little more European and Angelenos gear a little more Japanese and so we were able to have a lot of fun with color and pattern. If this was Manhattan we would’ve been more subdued,” Mann says . “We wanted to make Molly a woman of this time and of this place—and new money, which is a little more wild.”

Yet as delightful as it is to watch Molly uninhibitedly peacock around in feathers, silks, prints, and designer labels, Loot is as much an earnest tale of redemption and self-discovery as it is a buoyant candy-colored parody. As the season progresses, Molly slowly comes down to earth—and so does her wardrobe.

“We definitely have that arc going,” Mann says. For her first day of “work,” Molly comes dressed in the same pink satin suit that Beyoncé wore in her “Apeshit” music video with Jay-Z. By mid-season, her daytime attire has better adapted to her professional environment, with printed midi dresses by the likes of Rodarte, Erdem, Zimmermann, and Sandro. “As she actually begins to fit into the place, we try to show that in many ways but definitely in her clothing,” Mann says. Which is not to say that Molly has lost her spark.

“We’re still going to have fun,” she saysespecially now that Loot has been renewed for a second season. “I feel like we found a unique vision for Molly that combines Maya’s style with uber-wealth.” She may have finally gotten a clue but at the end of the day, Molly still loves fashion—and she’s still filthy rich. And these two things always make for good TV.

Leena Kim is an associate editor at Town & Countrywhere she writes about travel, weddings, arts, and culture.