Let’s explore the Inspiring Walt Disney exhibit, which got its start at the Met in New York City, to learn more about Disney’s French roots.

Classic films from Disney happen in magical kingdoms far away, but many of their styles are inspired by the real world. If you’re ready to nerd out and dive deep into animation history, consider checking out Inspiring Walt Disney: The Animation of French Decorative Arts.

The exhibit started at The Metropolitan Museum of Art in New York City and is currently on its way to The Wallace Collection in London. If you’re not ready to cross the pond, I highly recommend The Met’s exhibition catalog, available now through the museum’s online store and other major retailers.

I also highly recommend the March 2022 issue of WDW Magazine, called Art & Animation. Across 64 pages, we dive deep into the history of Disney animation and how you can explore it in Disney Parks across the globe today. Become a digital subscriber for just $4.99 a month to unlock this issue, plus 100 more!

This article contains affiliate links. If you’d like to support us directly, please consider subscribing to our Digital Edition.

While French style can be found in several Disney films, the Inspiring Walt Disney exhibit and art book focus on three major releases: Cinderella, Sleeping Beautyand Beauty and the Beast. They also discuss French influences on the studio as a whole and castle designs in both the films and the parks around the world.

Before Disney hit the ground running with his cartoons, Walt lied about his age to volunteer in World War I to be an ambulance driver. He made it to France just in time for the armistice to be signed but still lived in the country for a time helping with post-war reconstruction.

After his success with Mickey and Steamboat Willie, he returned to Europe to tour France and other countriesreturning home with books of fairy tales to give to his animation team. If you’re a fan of the Silly Symphony series, the art book shows the porcelain figures and dishes that inspired shorts like The China Shop. 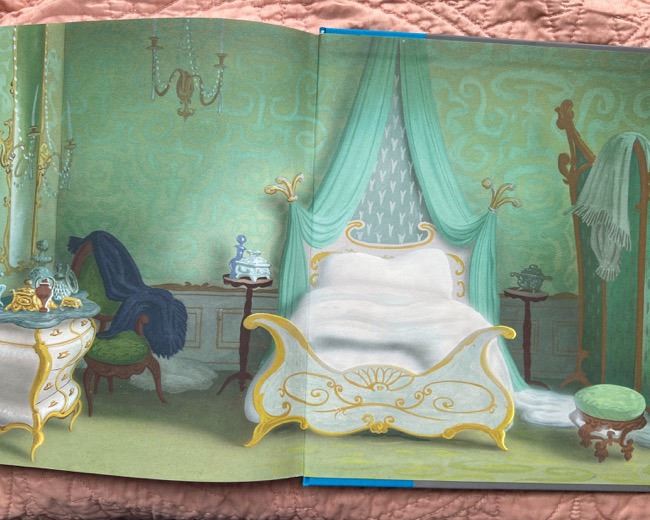 It was great to see how each period influenced the movies and why they were chosen. For example, animators chose the 1850s for France for Cinderella so that the buildings could be in a dramatic French style and the women could wear gowns, but the men wouldn’t be wearing powdered wigs. Why? Powdered wigs are harder to animate.

In post-war America, I’m sure audiences appreciated a prince in a sharp military uniform. 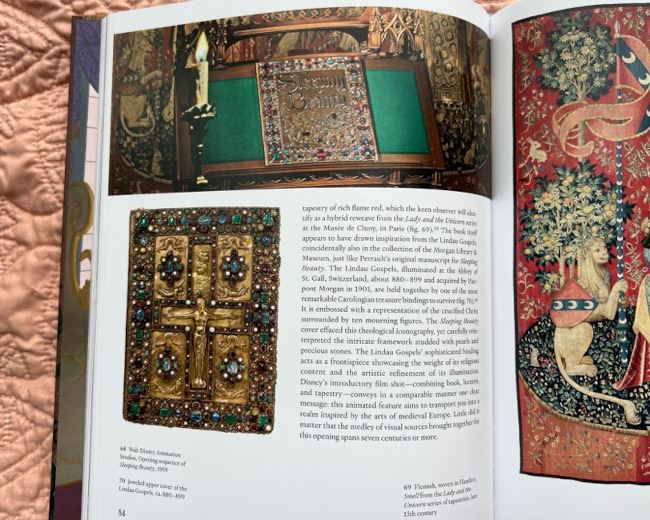 The Met truly shines when it talks about Sleeping Beauty‘s inspiration. Its Cloisters branch is home to The Unicorn Tapestries and other woven medieval art that heavily influenced Briar Rose’s film.

Sleeping Beauty‘s dark fashions and dramatic style set the scene, but before the story even starts we see a purely medieval item: the storybook. The exhibit catalog shows the original Sleeping Beauty book that opens at the beginning of the film and poses it next to a jeweled edition of the Lindau Gospels.

The crucifix might be missing from the Disney version, but the gold cover and embedded gemstones are an almost perfect match. 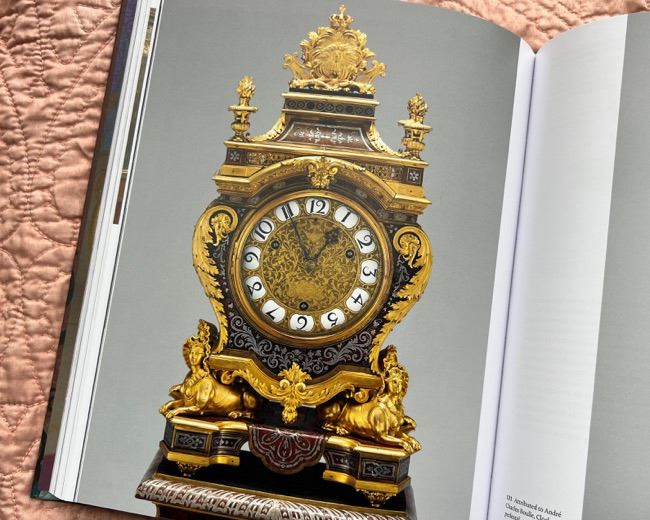 Beauty and the Beast takes place in a vague time in French history. Animators loved the look of the Rococo period of the late 1700s, but they still wanted simpler lines that were easy to animate.

In the case of this movie, the art book and exhibit focus on showing how the enchanted objects were inspired by real-life candlesticks, clocks, and teapots.

The art book proves how the inspiration for the animated movie carried over into the live-action Beauty and the Beast. When you see the fancy clocks and gilded candelabras, they look very similar to the computer-animated versions that shared the screen with Emma Watson. 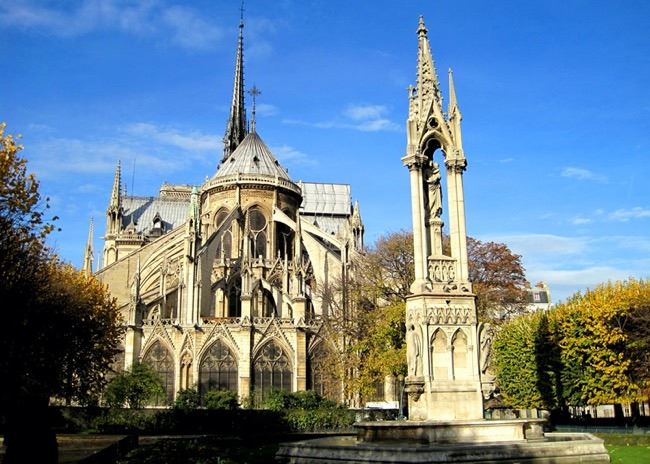 The art book also shows other ways French art inspires the Walt Disney Company. For example, if you look at the spires of some Disney Parks castlesyou might see metal structures that look like those that adorned Notre Dame before its fire in 2019.

There is also a whole section dedicated to a famous French painting called The Swing by Jean-Honoré Fragonard. In early versions of Beauty and the Beastit was the inspiration behind an opening sequence that featured Belle and Maurice. It was then used in concept art for Tangled before a Disney version of the painting finally showed up in Frozen.

It’s such a fun piece of art, and it made me chuckle to think of how much work it did behind the scenes at Disney before it got its due. 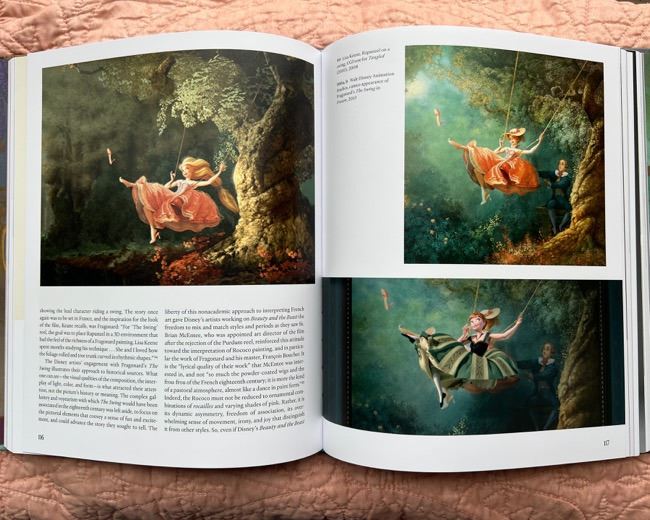 The world’s major museums regularly publish exhibition catalogs as souvenirs and to share art with fans. If you like Disney art and history, I highly recommend the print version of Inspiring Walt Disney published by The Met in the United States.

The pictures of artifacts and Disney art are well-presented, and the text is full of detailed research. Even if you’re not prepared to dive deep into the history of French decorative art or behind-the-scenes Disney politics, The book is formatted so that you can easily look through and see movie art next to real-life inspiration.

Will you be ordering a copy of Inspiring Walt Disney: The Animation of French Decorative Arts? Tell us your thoughts of on our Facebook page!

REVIEW: Look Deep Into Pixar’s ‘Soul’ With These 2 Books

Join the Family Madrigal with ‘The Art of Encanto’

Make a Splash with ‘The Art of Luca’

Rebecca Bernard works in the automotive industry by day, but by night you can find her with a crazy far-off look and her nose stuck in a book. Some of her favorite childhood memories were made at Walt Disney World, and she can’t wait to visit again to grow her Disney Pin Trading collection.