A Whitney Houston reference and a trip to Fort Lee put New Jersey in the spotlight at the 2022 MTV Video Music Awards, held Sunday, Aug. 28 at the Prudential Center in Newark.

This year featured performances from the country star Kane Brown —at the Ross Dock Picnic Area in Fort Lee — Nicki Minaj, Eminem and Snoop Dogg, Lizzo, Jack Harlow and Fergie, Anitta, Bad Bunny, J Balvin and Ryan Castro, Blackpink, Marshmello and Khalid, Maneskin and Panic! at the Disco. LL Cool J, along with Nicki Minaj and Harlow, were the hosts.

Taylor Swift, a Pennsylvania native who summered at Stone Harbor as a kid, won Video of the Year for “All Too Well (10 Minute Version),” and two other awards. Harlow won four awards and Lil Nas X three.

The late Houston and Michael Jackson were cited by Nicki Minaj during her Video Vanguard Award acceptance speech as a cautionary note about mental health.

“I wish that Whitney Houston and Michael Jackson were here,” Minaj said. “I wish that people understood what they were going through. I wish people took mental health seriously, even for the people who you think have perfect lives.”

“I wish Pop Smoke and Juice WRLD were here,” Minaj continued. “RIP daddy, my cousin Richard and my business manager Angela who I never got to say rest in peace to publicly.”

Houston, the Newark-born daughter of music star Cissy Houston and cousin of hitmaker Dionne Warwick, was found dead in a hotel bathtub on Feb. 11, 2012, in Beverly Hills, California, on the eve of that year’s Grammy Awards. She was 48 and had struggled for years with cocaine, marijuana and pills.

Her funeral took place at the city’s New Hope Baptist Church and there’s a mural of her on the façade of William House, a mixed-use project with apartments three blocks from the Prudential Center.

The action later switched to Fort Lee, birthplace of the US film industry, where country star Kane Brown performed his song “Grand” in front of cheering fans at the Ross Dock Picnic Area. 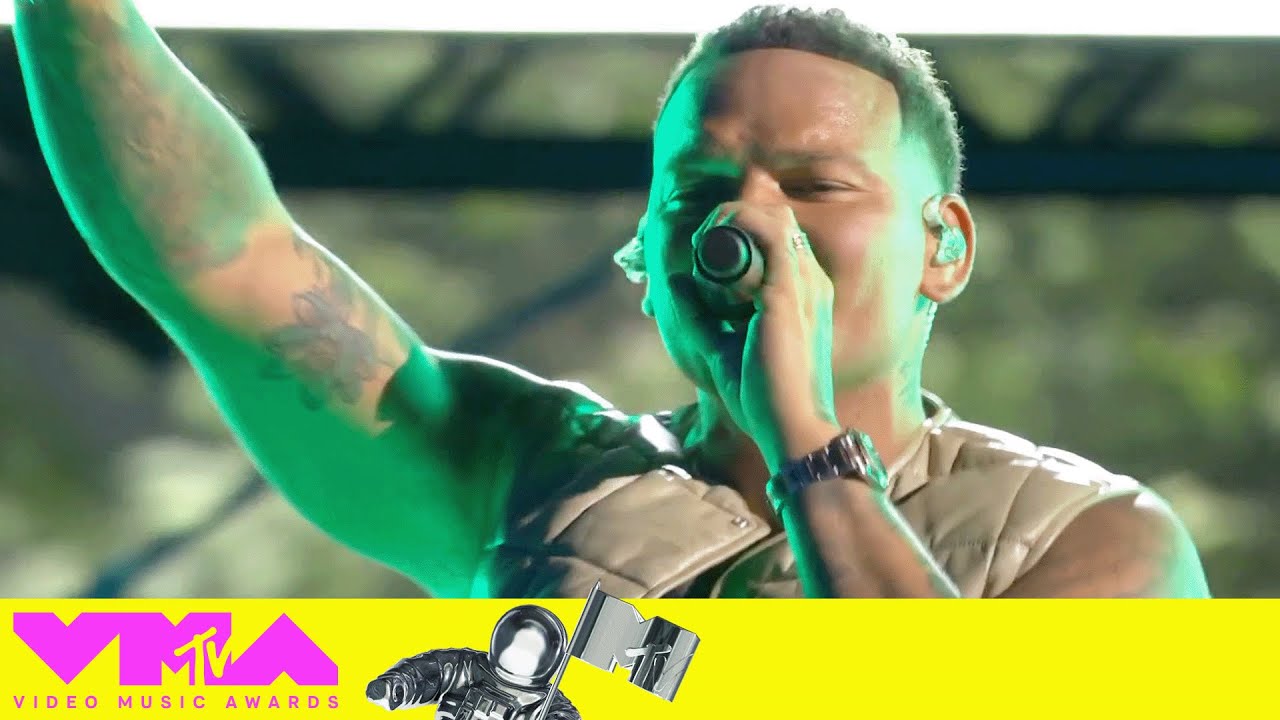 The spot was named the Toyota Stage for the performance, which was filmed prior to Sunday night.

Fans got a kick out of the VMAs’ Fort Lee shine.

“ ‘Heading over to fort lee, nj for his first ever vma performance’ is such a funny sentence,” Tweeted one fan.

“Time for some traffic problems in Fort Lee… #VMAs,” tweeted another, in a reference to the infamous Bridgegate.

Special effects depicted a spaceship landing on the picnic area with an MTV Moonperson emerging as the performance began. Actor Johnny Depp made an appearance as the Moonperson earlier in the show, but he wasn’t in Fort Lee. Brown is the first male country star to perform at the awards, which were founded in 1984.

The VMAs on Sunday returned to the Prudential Center where they were previously staged in 2019. That year featured more pronounced Jersey references, including Wyckoff natives the Jonas Brothers performing remotely at the Stone Pony and Asbury Park boardwalk, and a tribute to Jersey hip-hop with performances by Naughty by Nature, Redman, Fetty Wap, Wyclef Jean and Queen Latifah.

“Prudential Center could not have been happier to once again partner with Paramount to host another historic night in music and entertainment,” said Sean Saadeh, Executive Vice President Prudential Center, in a statement after the show. MTV is part of Paramount Media Networks. “From first time award winners to global icons to once in a lifetime performances, the VMAs continue to raise the bar for live entertainment.”

The awards took place at the Barclays Center in Brooklyn last year.

“We look forward to working with them to deliver another global event to the great City of Newark in the future,” Saadeh said.

The Red Hot Chili Peppers were bestowed the Global Icon Award by comedians Cheech and Chong.

Subscribe to app.com for the latest on the New Jersey music scene.