Katarina Johnson-Thompson went through Olympic heartbreak last year, but with a little youthful inspiration and a new coach she explains how she’s been able to get over it

Katarina Johnson-Thompson remembers the feeling well. It was towards the end of her Year Six at school and she had just completed one of her first ever high jump competitions. As she was making her way out of the Wavertree Athletics Stadium, the seniors of Liverpool Harriers were arriving to start their evening training. The young girl, a huge Liverpool fan who was also just taking her first steps in athletics was immediately enthralled.

She duly did and a path was set which would take the now 29-year-old to global multi-event honors.

Johnson-Thompson was briefly back in her home city in March, just a couple of days after having sprung something of a surprise on the athletics world by returning to competitive action for the first time in six months at the World Indoor Championships in Belgrade.

Her flying visit to Merseyside included leading a session of funeticsan England Athletics program which is designed to help children learn the fundamental principles of running, jumping and throwing.

As the reigning world heptathlon champion, Johnson-Thompson now finds herself cast as the figure to look up to, the role model who might just ignite that spark of inspiration in some of the next generation.

Watching the youngsters learn the “pure” basics of the sport which is now her life, though, the Commonwealth champion admits the inspiration goes both ways.

“I see the kids enjoying the pure basics of athletics, the foundations, and that’s what it is all about,” she says. “I went through a couple of transitioning years where I lost that and it was about winning or proving a point but I think right now I’m in that sort of phase where I’ve been through a lot and I want to enjoy what I do instead of feeling like I felt last year.

“This year, for sure, is about me enjoying it and getting back into it. Hopefully the performances will follow.”

Johnson-Thompson cut a remarkably relaxed figure in Belgrade. The then defending world indoor champion admitted to having accepted a World Athletics invite to compete on “a whim”, purely because training was going well and she was looking to answer a few questions about herself.

That pentathlon in Serbia represented her first event since an Olympic experience which was painful on all sorts of levels. After rupturing the Achilles tendon in her left leg towards the end of 2020, that she was on the start line at all in Tokyo would have been cause for celebration in itself. That she then put herself in medal contention was nothing short of astonishing.

Coming off the bend in the 200m, however, her right calf gave way and she fell to the floor. She did defiantly refuse the offer of a wheelchair, hobbling her way to the finish line, but her third Olympics was over and the heartbreak visceral.

It was a blow which took a long time to recover from but, in some ways, it has helped. Whereas not so long ago the World Indoors might have represented an event at the ceiling of her ambition, Johnson-Thompson didn’t think twice about putting herself to the test in a major arena in March not quite knowing what would happen.

Sitting sixth after four events, she called a halt to her competition ahead of the closing 800m but was far from downbeat, smiling and joking with the media in the Stark Arena having got the answers she wanted from the exercise.

“It’s one of those times when you have to put yourself out there and see what happens,” she said at the time. “I just happen to have done it on a big stage but I’m hard enough now to just take this as a learning experience. The 800m is just [all about] guts, really, and I’ve got a lot of them already.”

With a bit more distance now between herself and that competition, what did she make of the experience?

“It was a pleasure,” she says, more than a hint of gratitude in her voice. “It’s been such a long time since I felt these sensations and enjoyed being out there. I felt like I was back to myself, given little elements like my warm-up and [the way] my take-off leg with the Achilles rupture was reacting to the ground. I feel so much better than I did last year. I feel like my old self again.”

She adds: “Once upon a time this would have been the biggest competition I’d ever done and now I can see it as like a building block into the summer. It just shows you the maturity

“I think last year was probably the scariest thing I’ve ever done – going to an Olympic Games post-rupture and only having done one competition [in preparation].

“Everything can be a learning curve – it’s just that the more experience you have, the more equipped you are to deal with it. That’s probably one of the reasons why I chose to do it [the World Indoors] as well. In the past I definitely would have reacted differently but I’m completely chilled and focused on summer.”

Adding to that air of confidence is Johnson-Thompson’s new coach, Petros Kyprianou, with whom she has been working since the end of last year. She had been led to her 2019 world title by Bertrand Valcin, but the Frenchman’s commitments to his national federation brought a parting of the ways and the former European indoor champion is now based in Florida rather than Montpellier as a result.

In a recent interview, one of the first things Kyprianou declared about his high-profile athlete was that: “Karma owes KJT big time. She’s one of the toughest people I’ve ever met.”

Johnson-Thompson laughs at the quote and is more than happy to subscribe to that theory. There’s no hesitation, however, in bringing a little dark humour into proceedings by making reference to a stand-up routine from American comedian Chris Rock.

“Petros is quite similar to me in believing stuff like that,” she says. “I hope what goes around comes around… or, as Chris Rock would say, sometimes it just keeps coming back around!” 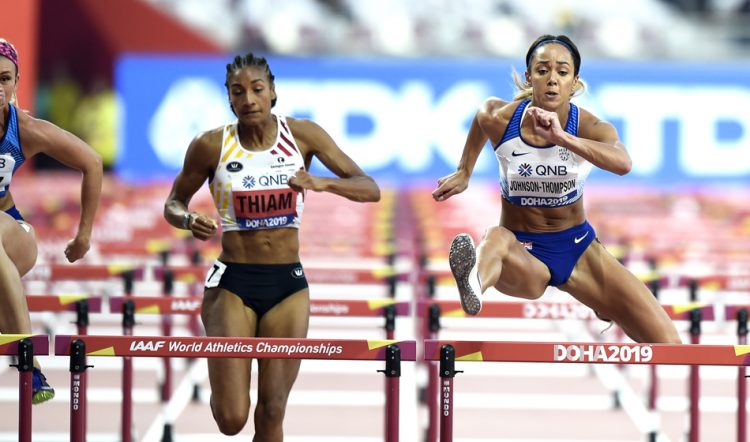 Once the laughter subsides, I ask her to compare her two most recent coaches. “They are completely different people,” she says. “Bertrand’s very chilled and relaxed and takes the Southern France approach to things, which definitely helped me in the position I was in when I moved to work with him. I needed to settle down and not have so much anxiety about competing.

“I think Petros is the perfect sort of person for me now. I needed that motivation – as you were saying about karma and things not being fair – I needed that push to remind myself of the type of athlete I was.

“He was really good during the comp [in Serbia]. You don’t know if a relationship is going to work until you get into the thick of the competition, when you need them the most – and he was really good. I’m very happy that I experienced that and I can relax into [the World Championships in] Eugene, and not have to worry about what that’s going to be like. It was a big box ticked.”

One of Johnson-Thompson’s greatest frustrations about last year is that she wasn’t able to celebrate the achievement of just getting herself to the Olympics. Never before had she dug so deep.

“I think it got lost last year with the calf injury,” she adds. “We overcame an enormous amount. It’s a shame and that’s probably what I’m upset about the most – that we couldn’t celebrate that moment and the work that we put in didn’t get celebrated.

“Even if I’d come last at the Olympics, we didn’t get that feedback and had to just come off the track. That was the hardest thing about it all for sure but you have to take a step back and reflect on what happened and I don’t think I gave myself credit that was due for just getting back on the start line.”

Having ridden such an emotional rollercoaster, does is get difficult to stay on an evenkeel?

“[The highs and lows are] a part of sport,” she shrugs, before planting her tongue firmly in her cheek. “It’s why everyone loves to watch sport and play it. It’s why some people can remain Arsenal fans…

“If they can remain Arsenal fans then maybe they’ll be able to support me in this next chapter!”

And, with that, it’s time to prepare for a grilling at the hands of Liverpool’s up and coming young athletes.

“The kids are fantastic,” adds Johnson-Thompson, still smiling. “They all think that they can beat me in a race so it’s typical and exactly what I felt like when I was a kid.”

She deserves to still be smiling later this summer, too.

» This first article appeared in the April issue of AW magazine, which you can buy here