An essay tracing the evolution of Shanghai lockdown memes from giddy jests about Shanghai culture to gallows humor and gloomy meditations on the state of society was censored last week after going viral on Weibo. The essay, published on WeChat by two authors 猫猫虎 and 山顶洞人 (aka catiger11), was part of a broader creative outpouring of politically tinged works that have taken China by storm in recent weeks. In one example, a national student poetry competition went viral on Weibo after a number of students submitted entries on generally taboo subjects such as Xiaohuamei, the war in Ukraineand the death of Li Wenliang. “I’m surprised they came out in such a tightening environment where many poems depicting the dark sides of society, or defying the authorities’ general ideology, have been censored,” Chris Song, a professor at the University of Toronto Scarborough, told The Washington Post. Another striking incident occurred late in the evening on Friday, April 22.”Voices of April,A six-minute compilation of audio clips of Shanghai citizens in distress, went massively viral on WeChat, despite unequivocal censorship directives ordering the video erased, “leaving no gaps in coverage.” The essay is also a contribution to the growing body of pandemic humor that ridicules “Epidemic Prevention Hobbyists,” and, quite often, lockdowns. The essayists, unintentionally paraphrasing John Donne, warning against the impulse to wisecrack about lockdowns. “Before too long,” they wrote, “You will find the clown is thee.” CDT has translated a selection of the 66 memes and jokes included in the essay “From Hilarity to Reflection: An Evolutionary History of Shanghai Lockdown Jokes,” as well as some reader reactions to the essay and to its subsequent censorship:

A WeChat screenshot of the lockdown announcement with the comment: “They only gave Pudong residents four hours to stock up on food. They gave Puxi residents four days. I guess all the leaders live in Puxi.” 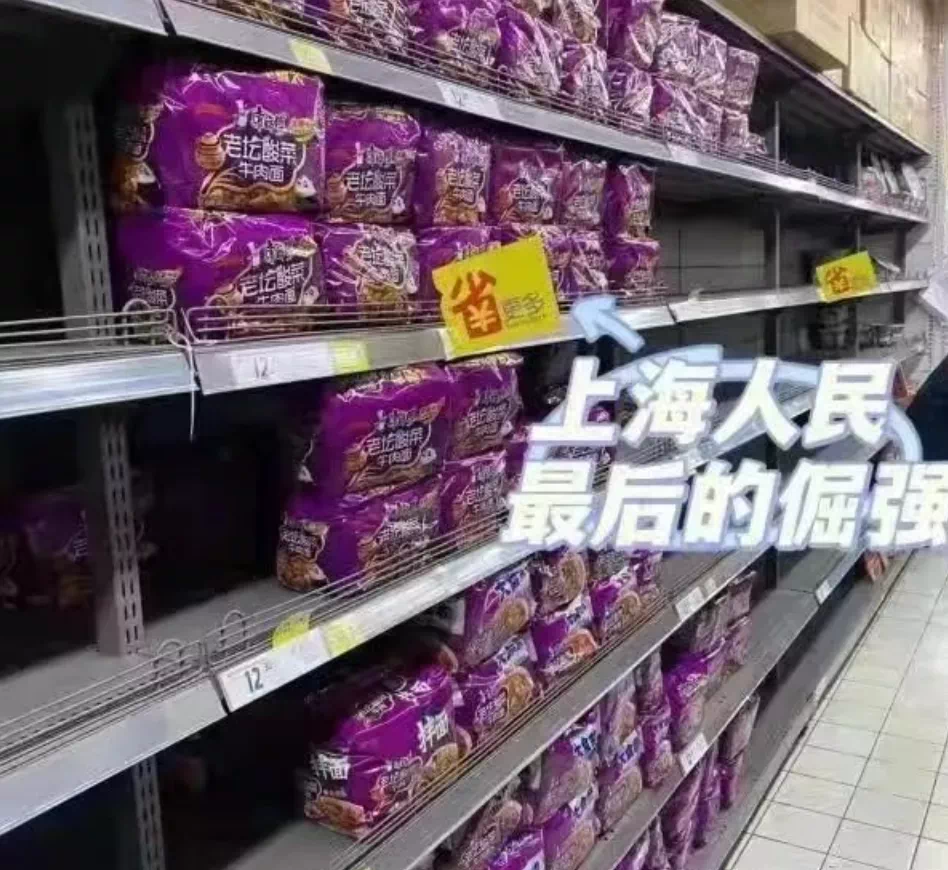 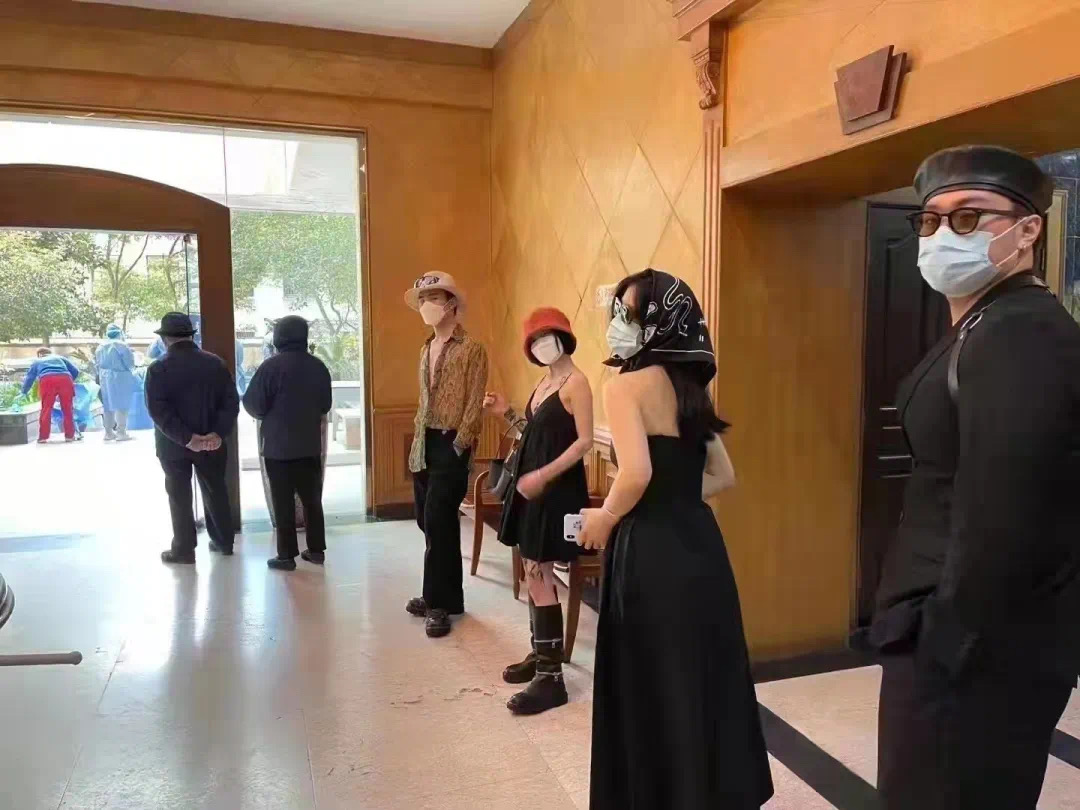 Shanghai residents show up for mandatory testing in style. 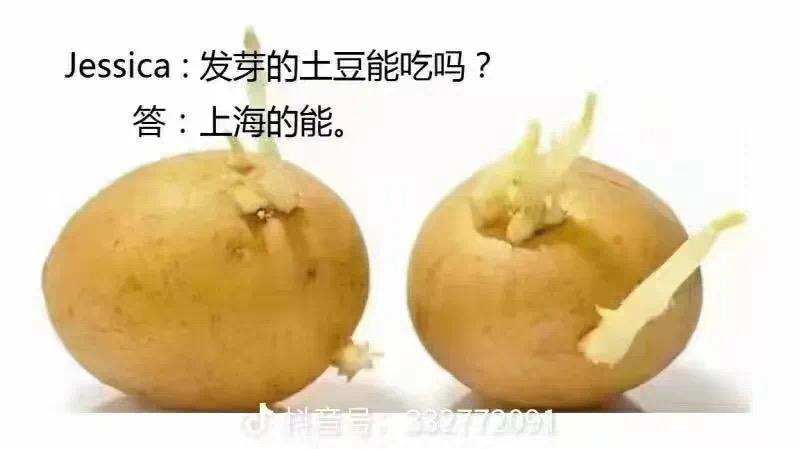 “Jessica: Is it safe to eat sprouted potatoes?”
“Answer: In Shanghai it is.” “ 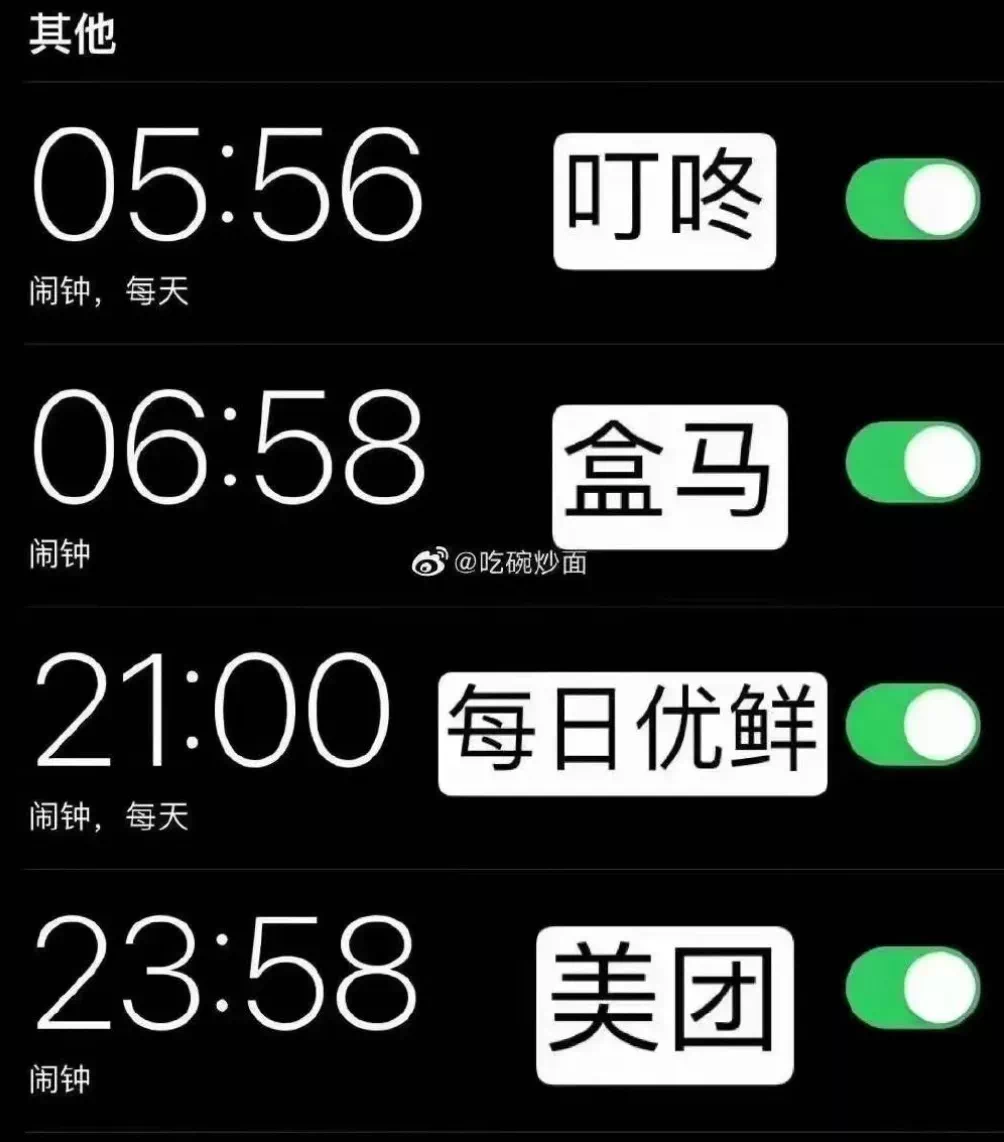 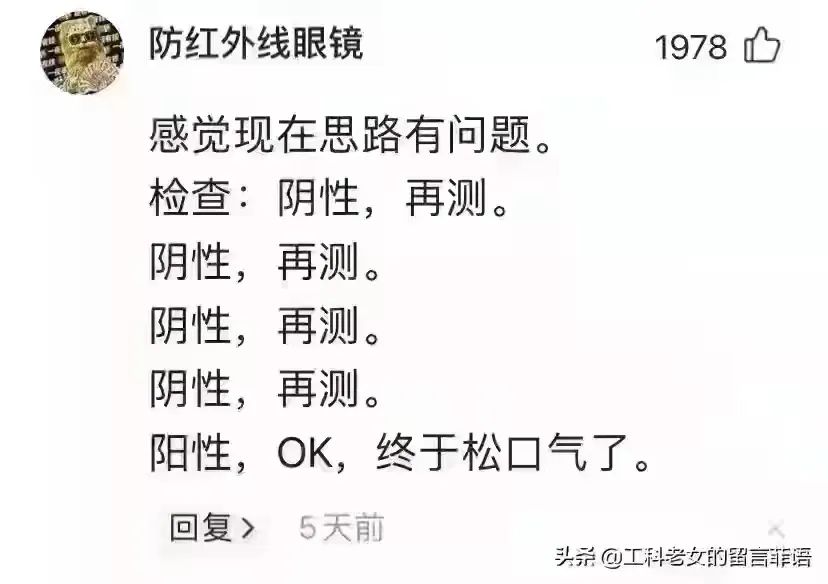 “I feel like we’re thinking about this all wrong. 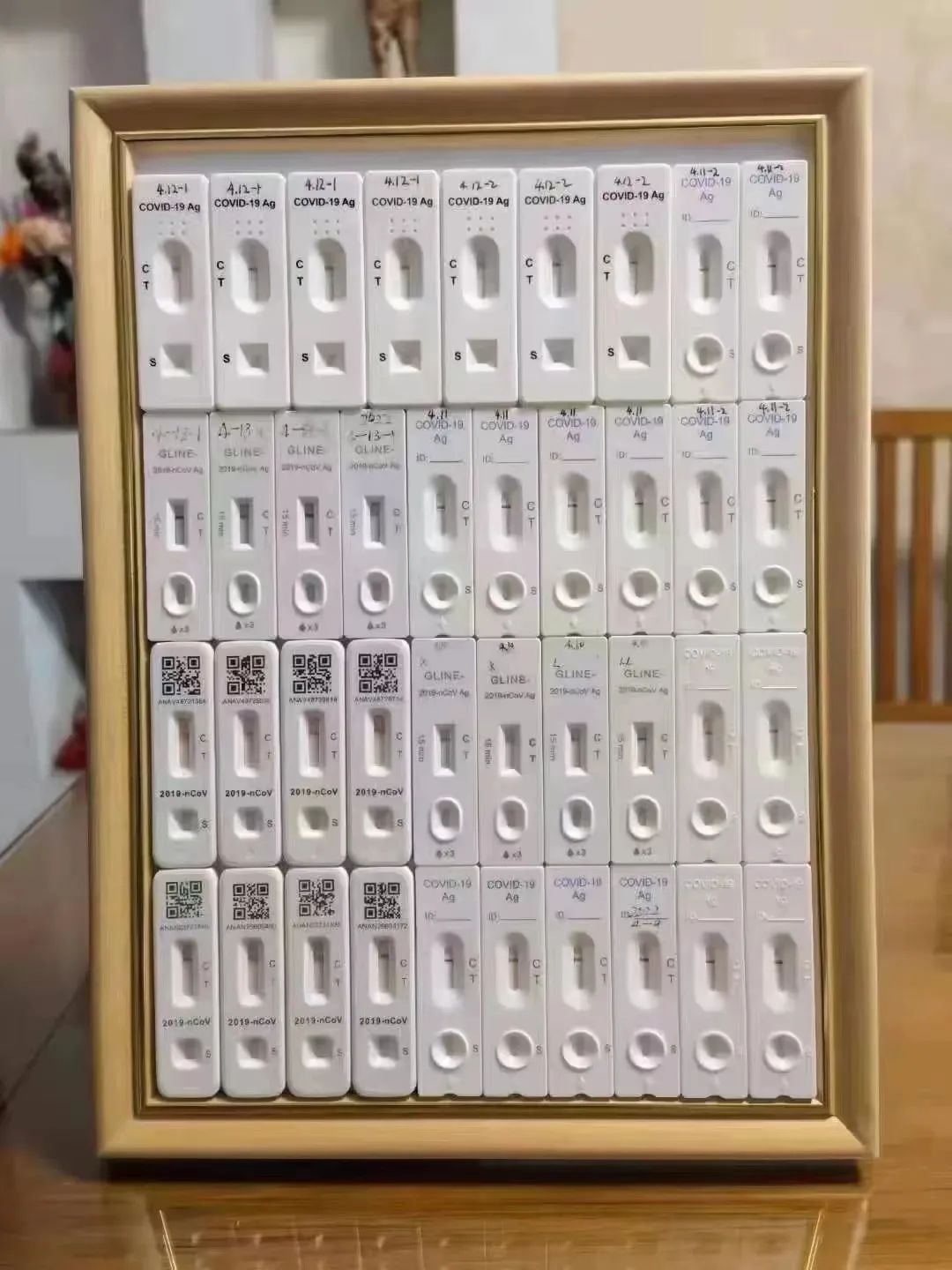 A framed collection of negative tests. 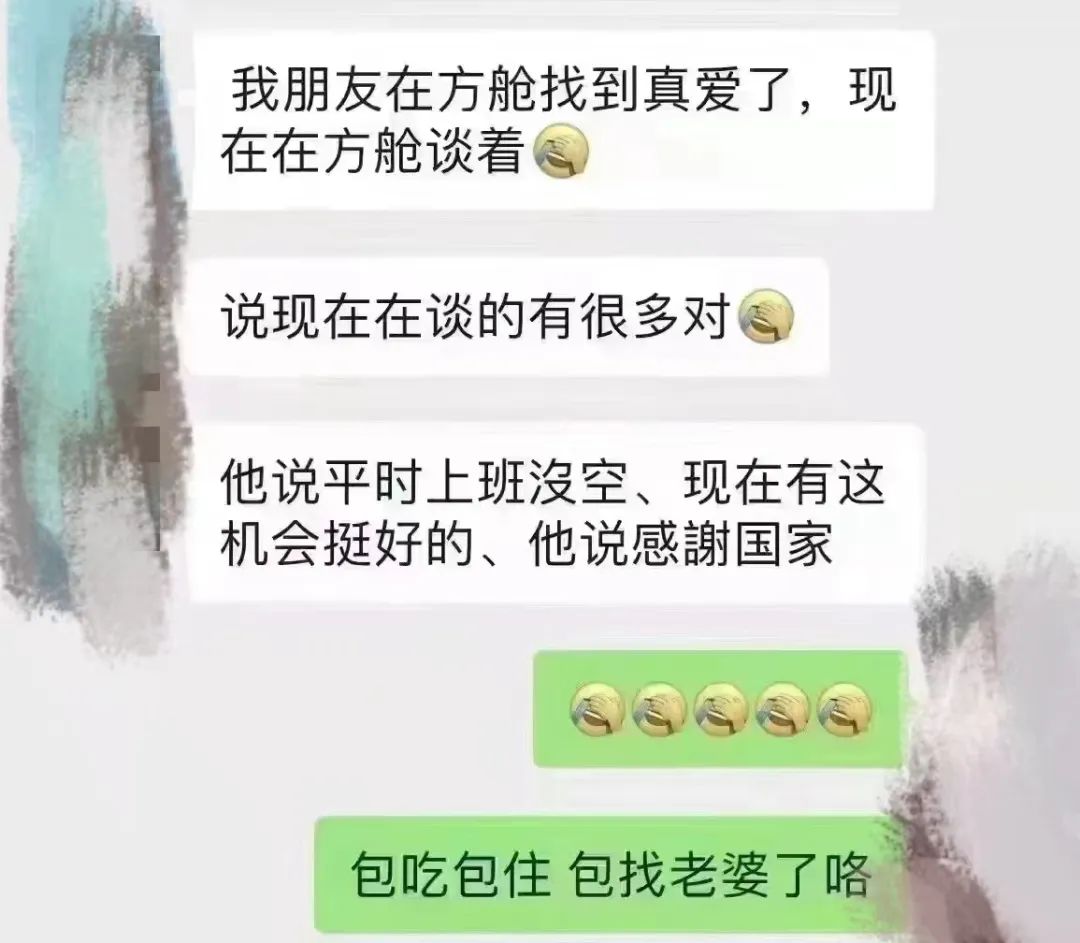 “My friend found true love in central quarantine. He’s dating someone in the field hospital.
“He says there are lots of new couples.
“He says when he’s working, he usually has no time for romance, so this is a pretty good opportunity, and he’s grateful to the nation.”
(row of laughing/crying emoji) “Guaranteed room, board, and a wife!” 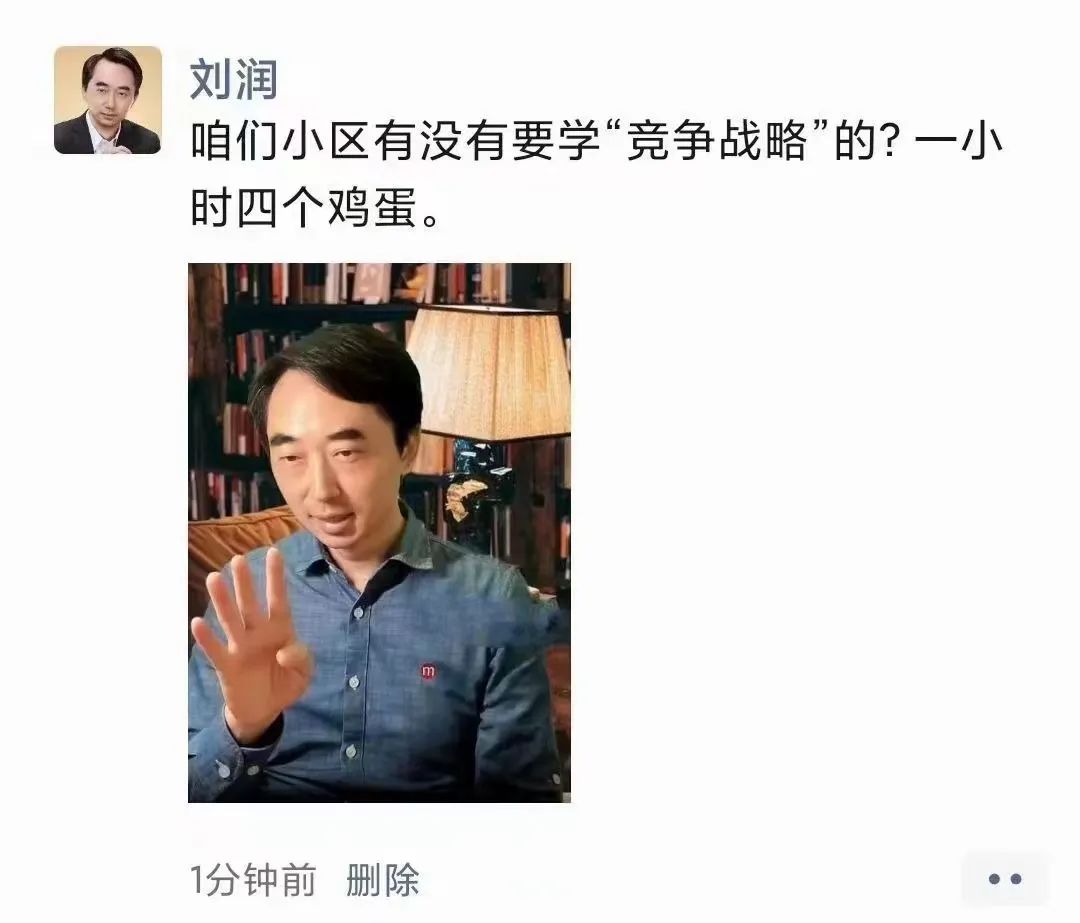 Famous businessman Liu Run asks: “Does anyone in our compound want to learn about ‘Competitive Strategy’? I charge four eggs an hour.” 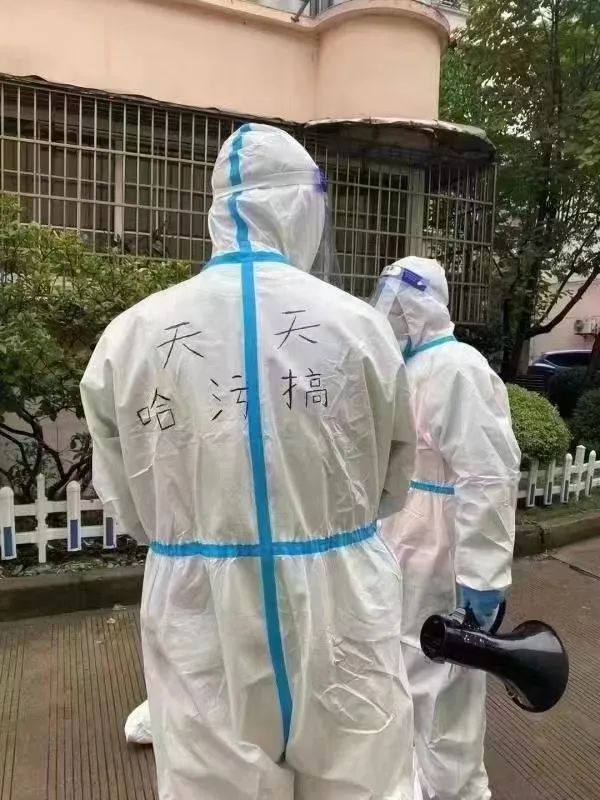 A “Big White“(a white-suited pandemic worker) has written a phrase in Shanghai dialect (“Messing around every day”) on the back of their PPE. 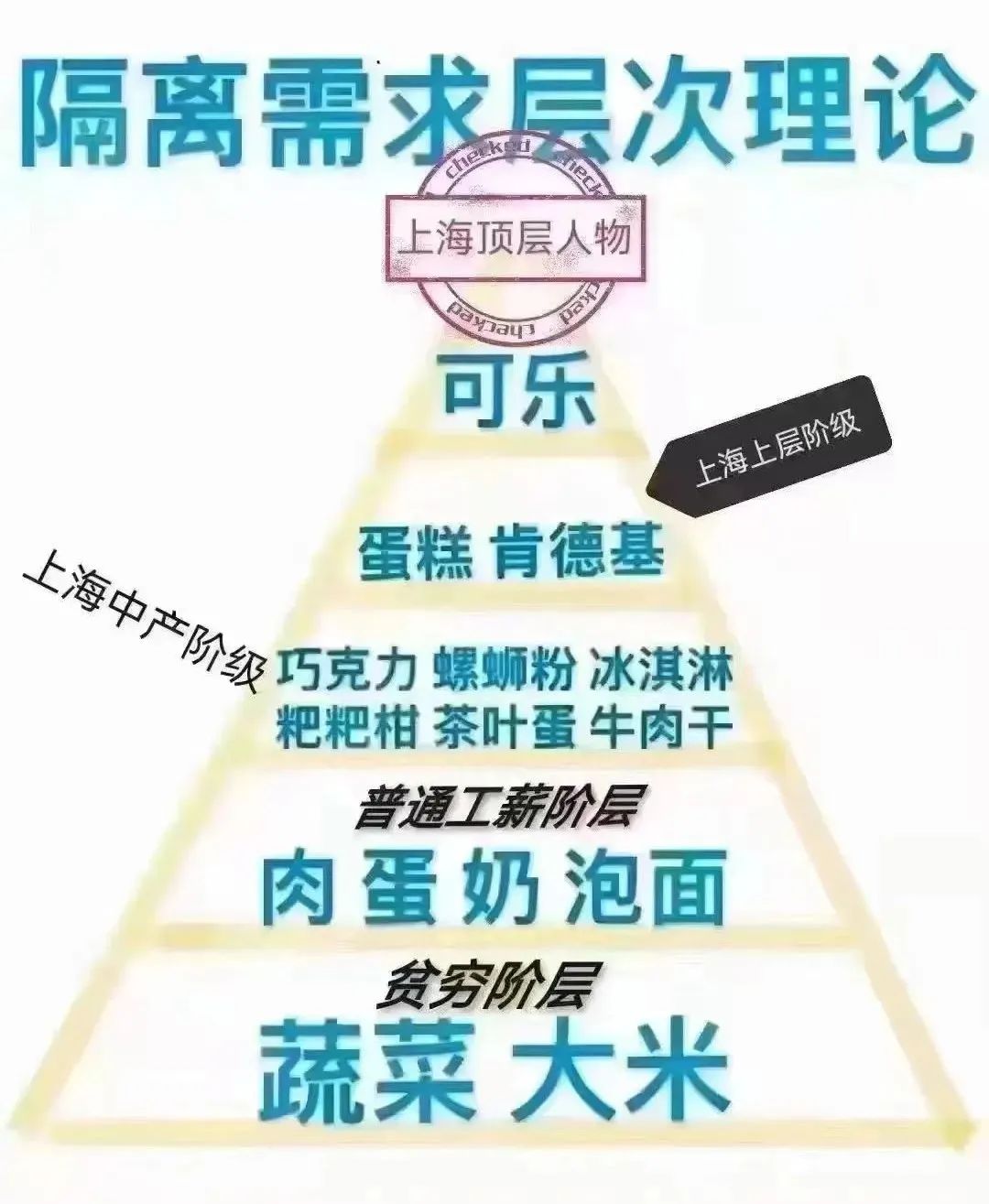 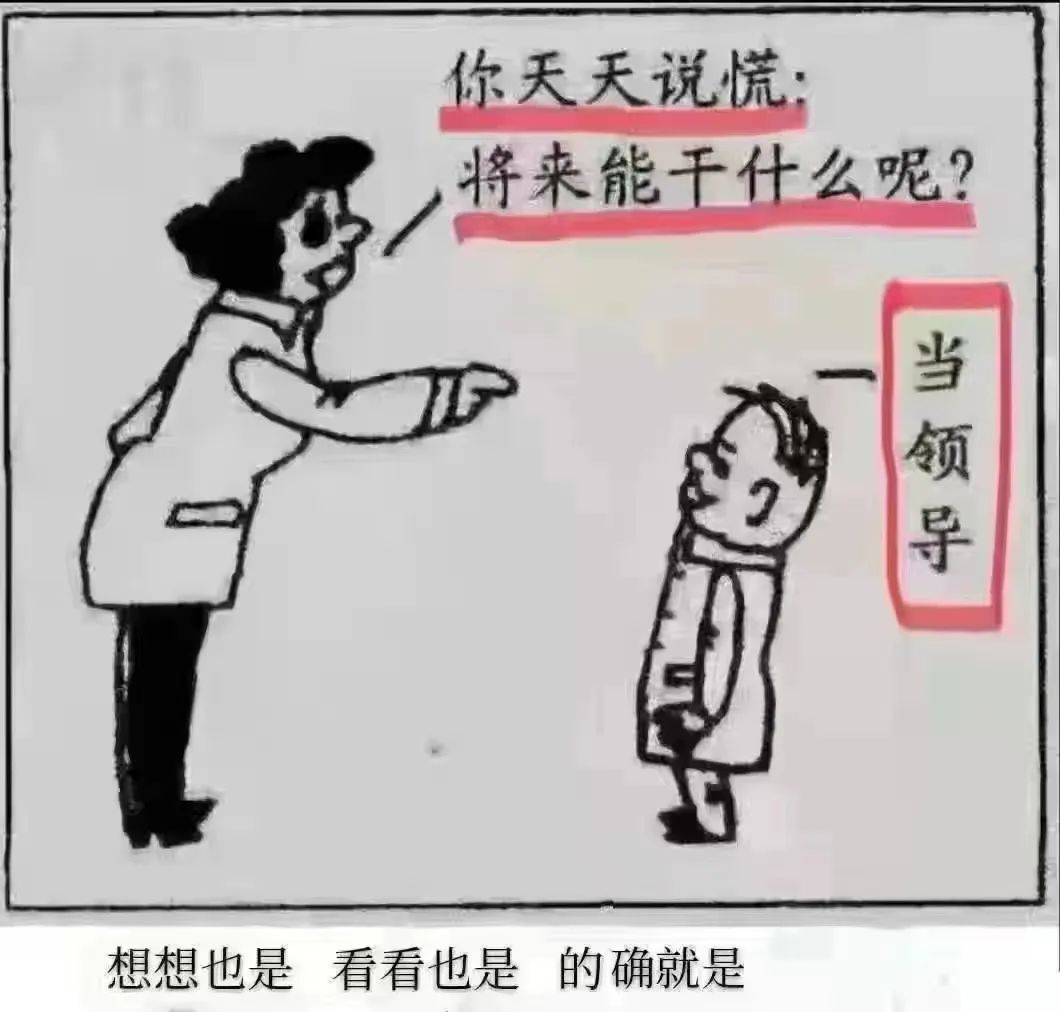 Mother: “You lie every day, what will you do when you grow up, huh?”
Child: “I’ll be a politician.” 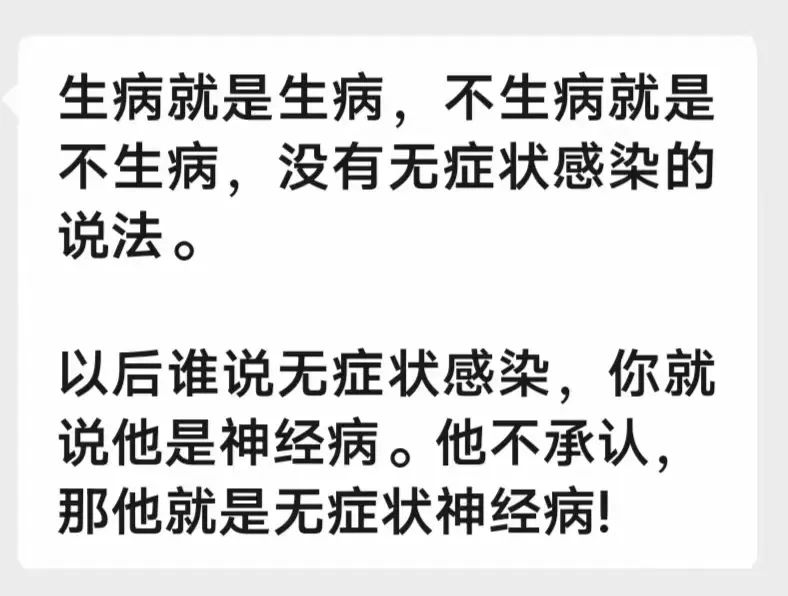 So if anyone brings up “asymptomatic cases,” tell them they’ve lost their mind. If they deny it, say they’ve got a case of “asymptomatic insanity”!

Personally speaking, I’m an endorser of Shanghai’s “zero-COVID” policy. I think everything about the policy is very good, but for one small hiccup: I’m currently in Shanghai. 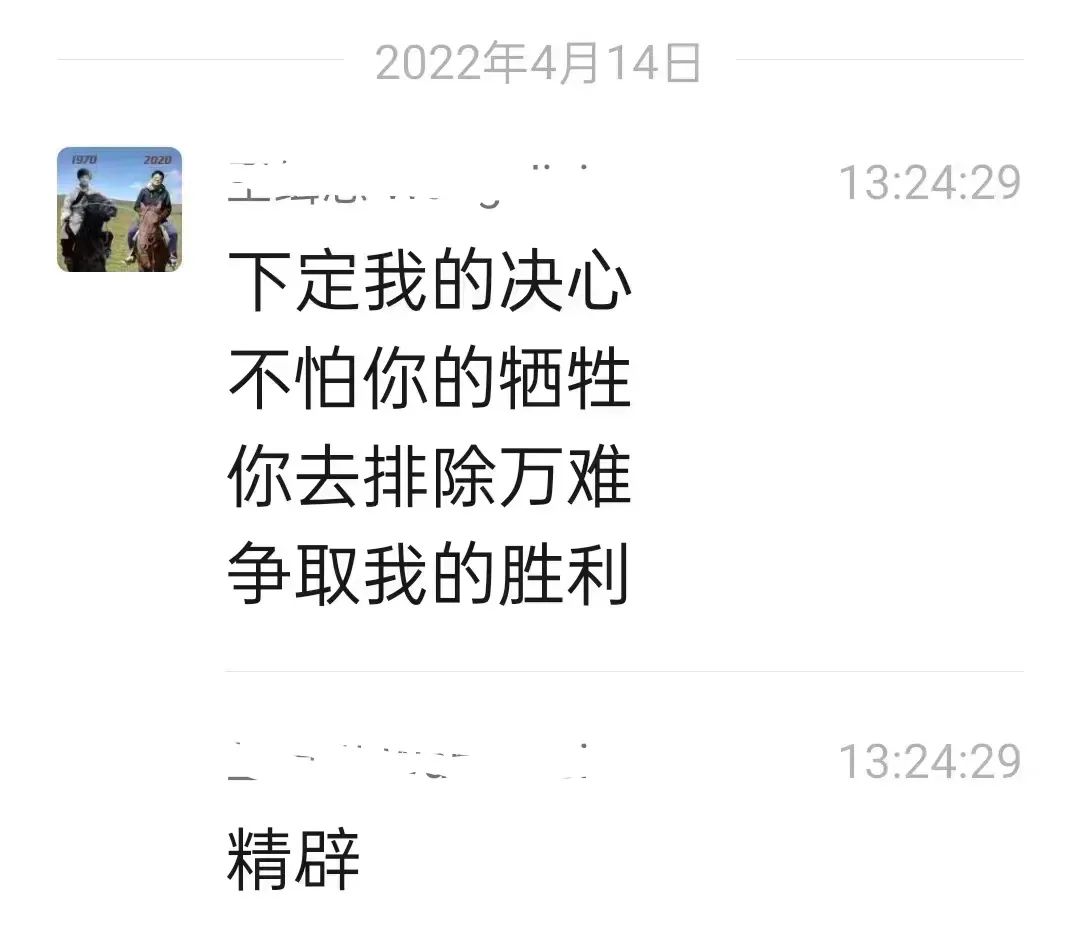 A reinterpretation of a line from Mao’s famous speech”The Foolish Old Man Who Moved Mountains,” where he perhaps best defined his belief in volunteerism and the ability of the masses to achieve any goal through sheer will—which later proved disastrous during The Great Leap Forward.

“I am resolute / and unafraid to sacrifice you. / You will surmount every difficulty / so that I may claim victory.” 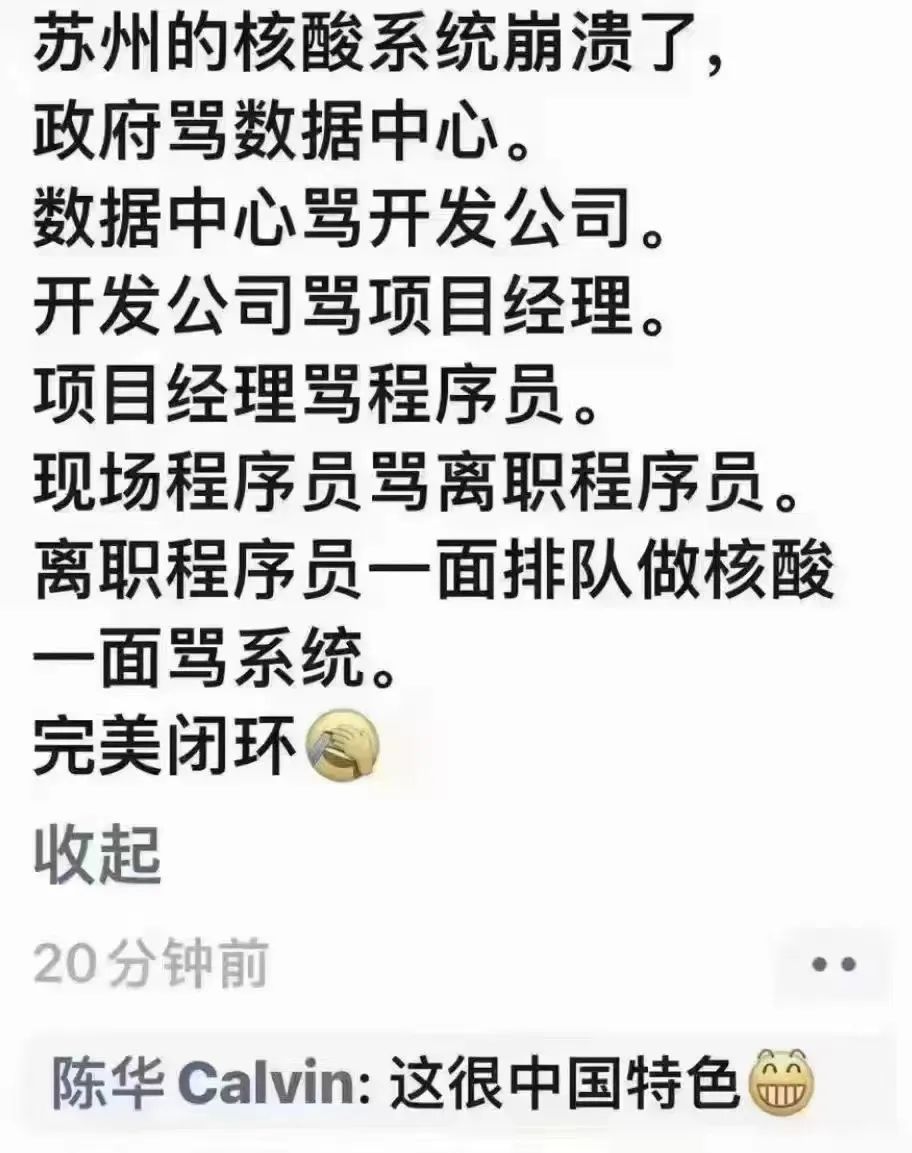 “Emblematic of ‘with Chinese characteristics'” 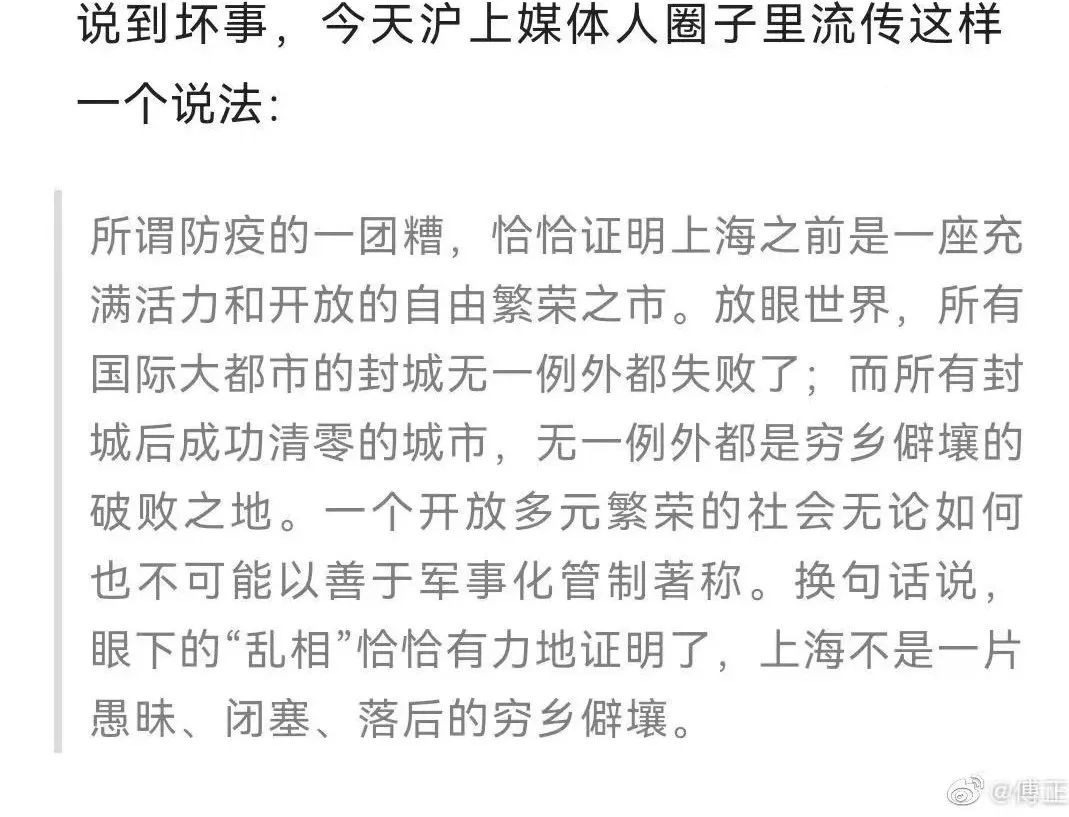 Speaking of bad things, this paragraph is getting passed around Shanghai media circles:

Curiously enough, the disasters of the so-called pandemic prevention policy that prove Shanghai was once an energetic, free, and wealthy city. Take a glance at the world. Every lockdown of a major cosmopolitan city failed, without exception. All successful lockdowns occurred in impoverished backwaters, again without exception. An open, diverse, wealthy society cannot flourish under military-style management. Which is to say that all of the “chaos” we see before us is powerful proof that Shanghai is not an ignorant, isolated, poor backwater.

Netizen comments reached for historical analogies ranging from the Cultural Revolution to ancient dynastic history to describe the situation:

Acrm319：When I used to hear about the Cultural Revolution, I thought it was absurd—that is, until I lived to see 2022.

南街33号：This is how the history will be written: “A group of people with malevolent intentions tried to abduct the entire population of Shanghai and dragged the entire country down with them, all so that they could look good to their overlords. ”

我使愿无违：In the past, the historical record was dependent on writers like Sima Qian, who is said to have concealed his writings in one of China’s famed mountains so that his collected wisdom could be passed down to future generations who might appreciate it. But given the present situation, we need a new way of phrasing this. Maybe instead of “concealing them in the famed mountain,” we could say “concealing them abroad, that their wisdom might have passed down to those who would appreciate it.” Not half bad.

鲁十五而志于学： 😭😭😭 It’s been deleted. I wanted to read it again. [Chinese]