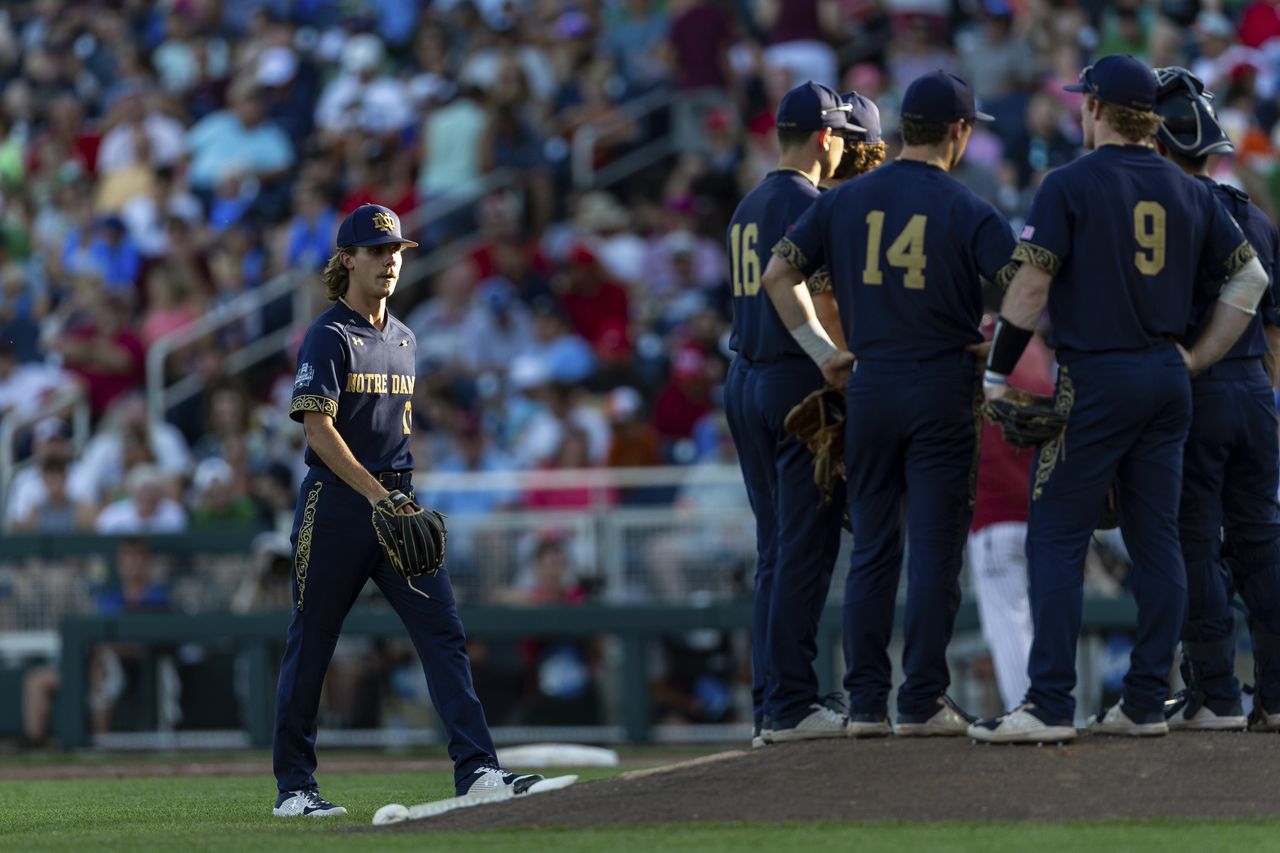 The Notre Dame Fighting Irish and the Texas A&M Aggies square off in an elimination game to keep their 2022 Men’s College World Series hopes alive at Charles Schwab Field in Omaha, Nebraska on Tuesday, June 21 (6/21/2022). at 2 pm ET.

The game will be broadcast on ESPN, and can be streamed live on fuboTV, DirecTV Stream and other live TV services.

This elimination bracket game follows Oklahoma’s 6-2 win over Notre Dame, securing its spot in the next round, and forcing the Fighting Irish into the elimination bracket. Now, these two teams will face off for a chance to face Oklahoma again, where they will need back-to-back wins to advance to the CWS Finals.

The Fighting Irish will look to exploit the Aggies poor defense, before Texas A&M can pile on another wild series of runs like they did in their 10-2 elimination of the Texas Longhorns.

Here’s how to watch.

Who: Texas A&M vs. Notre Dame

Cable subscribers can log in to ESPN.com or associated apps with their cable credentials to enjoy a free live stream of the game.

Cord cutters can sign up for free trials of fuboTV, Sling, DirecTV Stream or YouTube TV to enjoy free broadcasts for a limited time.

Next up, Auburn and Arkansas square off in the other bracket at 7 p.m. ET on ESPN2.

Can I be on the games?

Mobile sports betting is now legal in New York, which means you can now bet on college sports from your phone. We’ve compiled some of the best introductory offers to help navigate your first bets from BetMGM, FanDuel, DraftKings, PointsBet, Caesars Sportsbook and BetRivers.

Story by The Associated Press

OMAHA, Neb. (AP) — Cade Horton struck out a career-high 11 in six innings, Tanner Tredaway continued his torrid postseason with three hits and Oklahoma took control of its bracket in the College World Series with a 6-2 victory over Notre Dame on Sunday night .

The Sooners (44-22) need one more win to advance to the best-of-three finals starting Saturday. They’ll play Wednesday against the winner of a Tuesday elimination game between Notre Dame (41-16) and Texas A&M. The Aggies beat Texas 10-2 on Sunday.

With three freshmen, five sophomores and a senior in the everyday lineup and picked to finish sixth in the Big 12, Oklahoma wasn’t expected to be in this position. The Sooners got hot the second half of the regular season, won the conference tournament and went on the road to win its regional and super regional.

“Winning the national championship has always been the goal, and we’ve had that from the very beginning,” freshman third baseman Wallace Clark said. “It’s not a new idea. Even when we would lose a mid-week game, we would talk about it. The idea behind it was we’re going to win the whole damn thing.”

Horton, who had Tommy John surgery 16 months ago and didn’t pitch until March 29, went at least six innings for a third straight start. The redshirt freshman held the Irish scoreless on three singles the first five innings.

Horton (5-2) gave up David LaManna’s two-run homer to left in the sixth and didn’t come out for the seventh. He threw a season-high 100 pitches.

“When you have the mid 90s, you have a good slider, you have a curveball, and he flashed a changeup periodically… That was a lot. Clearly we didn’t recognize it,” Irish coach Link Jarrett said.

Tredaway continued to be a catalyst for the Sooners. He’s now batting .513 (20 of 39) in the NCAA Tournament after going 3 for 4 and extending his hitting streak to 16 games. He drove in two runs and scored twice.

“I really like to keep things simple,” Tredaway said. “I get in patterns like this where I can go on a long stretch and do pretty well. I try not to get out of my zone. I think the two-strike approach has been really good for me the last couple weeks. I’m trying to hit good pitches and do my thing and be on time.”

Notre Dame starter Austin Temple walked three of the eight batters he faced and was pulled with one out in the second.

Reliever Aidan Tyrell (5-2) got out of the inning but encountered trouble in the third. Peyton Graham legged out an infield single, stole second and scored on Tredaway’s base hit. Tredaway took second on a passed ball and came home on Clark’s single.

The Sooners added three more runs in the sixth to go up 5-0. Two of those scored on Clark’s bunt on the safety squeeze. Tredaway came home from third, and Jimmy Crooks followed him in from first when Carter Putz picked up the ball and threw wildly to Jared Miller covering the bag.

Putz had four of the Irish’s seven hits, his last one leading off the eighth inning and prompting the players in the Notre Dame dugout to grab their “rally bananas.”

The Irish have been getting the bananas out during the postseason when they need positive mojo in the late innings. If something good happens, the players take a bite. But Jack Zyska hit into a double play and LaManna flew out to end the eighth.

The Irish got their first two batters on base in the ninth, but Clark stepped on the bag at third and threw to first for a double play when Zack Prajzner grounded to him. Trevin Michael struck out Ryan Cole to end the game.