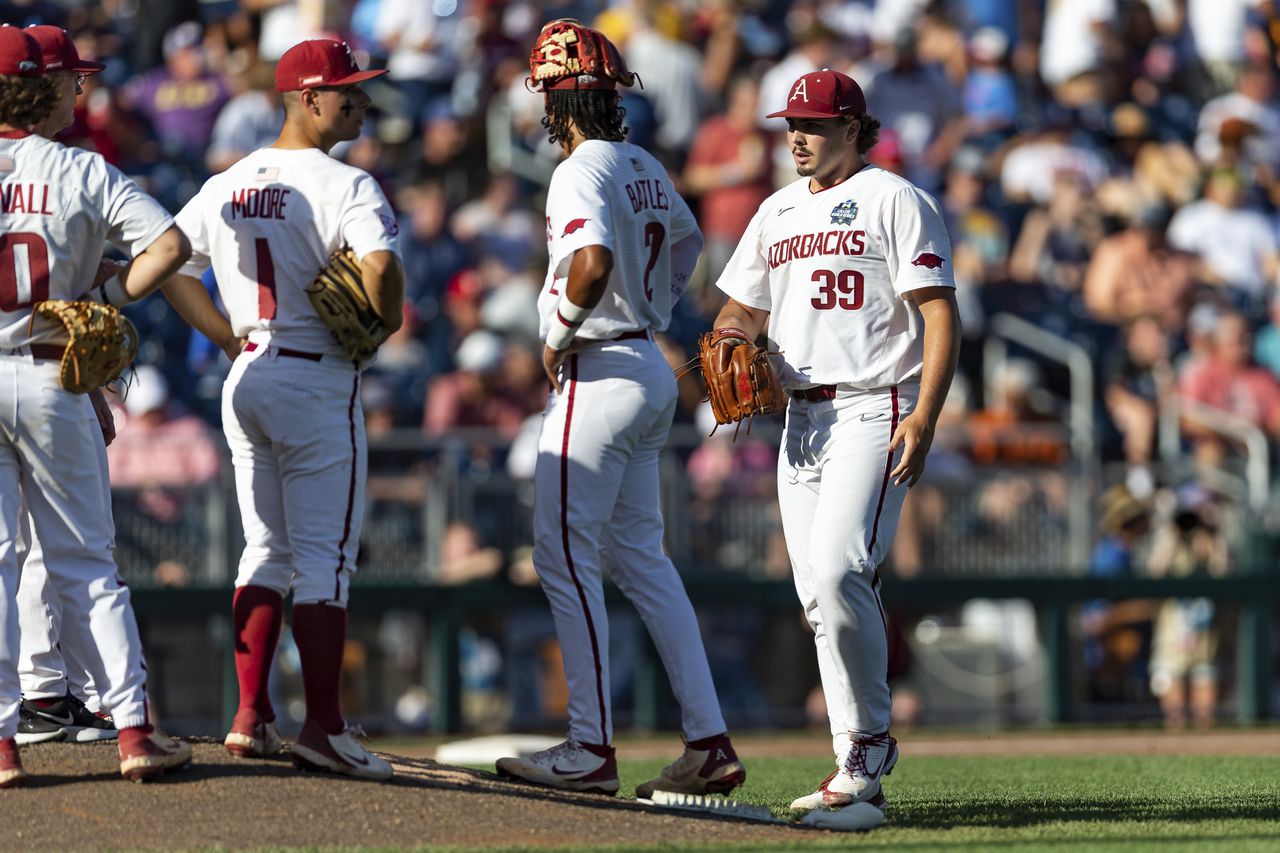 The Arkansas Razorbacks and the Auburn Tigers square off in an elimination game to keep their 2022 Men’s College World Series hopes alive at Charles Schwab Field in Omaha, Nebraska on Tuesday, June 21 (6/21/2022) at 7 pm ET.

The game will be broadcast on ESPN, and can be streamed live on fuboTV, DirecTV Stream and other live TV services.

This elimination bracket game follows Mississippi’s 13-5 blowout win over Arkansas, securing its spot in the next round, and forcing the Razorbacks into the elimination bracket. Now, these two teams will face off for a chance to face Ole Miss again, where they will need back-to-back wins to advance to the CWS Finals.

Ole Miss has soundly beaten both these teams once already in the tournament (5-1 over Auburn earlier in the bracket), and facing that opponent again is a daunting prospect for both teams, especially since they now must win three straight games if they hope to reach the CWS finals. Auburn hosted Arkansas late in the regular season and lost two out of three games.

Here’s how to watch.

Who: Arkansas vs. Auburn

Cable subscribers can log in to ESPN.com or associated apps with their cable credentials to enjoy a free live stream of the game.

Cord cutters can sign up for free trials of fuboTV, Sling, DirecTV Stream or YouTube TV to enjoy free broadcasts for a limited time.

Next up, Oklahoma faces the winner of Tuesday’s Notre Dame vs. Texas A&M matchup for a shot at the finals on Wednesday, June 22 at 2 pm ET on ESPN.

Can I be on the games?

Mobile sports betting is now legal in New York, which means you can now bet on college sports from your phone. We’ve compiled some of the best introductory offers to help navigate your first bets from BetMGM, FanDuel, DraftKings, PointsBet, Caesars Sportsbook and BetRivers.

Story by The Associated Press

The Rebels (39-22) have won seven straight in the NCAA Tournament after being the final team awarded an at-large bid.

“Getting hot is real,” coach Mike Bianco said. “As a coach, you just let them go.”

Ole Miss will play Wednesday against the winner of Tuesday’s elimination game between Arkansas (44-20) and Auburn. All three remaining teams in Bracket 2 are from the Southeastern Conference West Division.

The Rebels, in the CWS for the sixth time, would have to lose Wednesday and again Thursday to not reach their first finals.

“We’re a great team and we knew that from the start,” leadoff batter Justin Bench said. “We had a rough patch in the middle of the season where we were 7-14. I don’t know how many games in a row we’ve won now, but with the leadership of Tim Elko we stuck together and won games.”

Elko put Ole Miss up 4-1 in the second inning when he launched Evan Taylor’s high fastball 416 feet into the left-field seats for his 23rd homer.

Harris, the Rebels’ No. 9 batter, hit a two-run double in the third and his two-run homer in a four-run fifth. It was Harris’ second homer of the season and first since March 29. Harris went 3 for 4 and is hitting .476 (10 of 21) in the tournament.

Bench was 4 for 6 with two RBIs as the Rebels finished with 13 hits against seven pitchers. The Hogs issued 10 walks, one off their season high.

“They played better than us and we need to move on,” Arkansas coach Dave Van Horn said. “You can’t look at the big picture right now. You have to figure out how to play well tomorrow. Get a win tomorrow and have a chance to get to the next day.”

Elliott (5-3) had given up one earned run in 12 1/3 tournament innings leading into his start on a humid, 93-degree night. The freshman left-hander settled down after Arkansas scored three runs, one earned, over the first two innings.

“Unfortunately for him, we didn’t play great defense early,” Bianco said. “Not taking anything away from Arkansas, but he shouldn’t have given up a run today.”

Elliott walked Cayden Wallace to start the third and then picked him off. He worked around trouble in the fourth and set the Razorbacks down in order in the fifth and sixth. He allowed six hits, walked two and struck out four before Mason Nichols took over with one out and a man on base in the seventh.

“Pitching with a lead is huge, and these guys have been able to do that for me lately,” Elliott said. “It’s easy to pitch with the lead and not having to make every pitch perfect. It lets you flood the strike zone and let whatever happens happen.”

Arkansas scored its first run after Ole Miss left fielder Kevin Graham lost Michael Turner’s flyball in the sun. Graham froze momentarily and appeared to have no idea where the ball was until it landed near him. Braydon Webb, who had led off with a single, scored from first and Turner pulled into second with a double.

The Hogs added two unearned runs in the second after shortstop Jacob Gonzalez’s fielding error but didn’t score again until Peyton Stovall homered in the ninth.

Arkansas won two of three at home against Ole Miss in the regular season. The teams have met 107 times, but this was the first time they were matched in the CWS.

“It’s all about perspective,” Webb said. “We’re blessed to still be here and have the opportunity to go out and compete tomorrow. Just play our brand of baseball, have some fun. Tomorrow’s a new day.”