SPOILER ALERT: The following story reveals major plot points from tonight’s episode of NBC’s This Is Us.

For six seasons, fans of NBC’s This Is Us have felt a wide range of emotions toward the character of Miguel—mostly disdain—which they had to reconcile on tonight’s episode of the series aptly titled “Miguel.” The episode tips its hat to a humble and good man, an Afro Latino caught between two worlds never feeling like he fit anywhere perfectly until he fell in love with a woman named Rebecca (Mandy Moore).

The final product is a collaboration between Huertas, staff writer Jonny Gomez, director Zetna Fuentes, multiple Latino actors, and many more Latinos behind the scenes.

“Working on this episode was amazing,” Huertas tells Deadline. “The script was absolutely astounding and we got the perfect director to blow this one out of the park. When I first watched it, I audibly blubbered. These feelings have been building up inside me, I’ve been holding them in. I remember at one point, Sterling K. Brown was on one side of the room and I was trying to hold in my emotions but suddenly, this sound came out that I couldn’t control. As soon as that happened, Sterling, I guess, felt like he had permission too and he made a very similar sound. We sounded like two whales communicating with one another. When Mandy Moore joined in, I think that was when Rosy Cordero Dan [Fogelman] had to stop for a break. It’s nice that we were able to take Miguel out the way that we did.”

The episode jumps across different timelines, from showing Miguel as a young boy in Puerto Rico with his parents before moving to Pittsburgh for better job opportunities, to his love story with his best friend’s girl, to his eventual and heartbreaking death in the final beats of the episode.

“Writing this episode was a ton of pressure,” shares Gomez, who joined the show as a writer’s assistant in Season 3 before joining the staff this year. “I always knew there’d be an eventual Miguel-themed episode and I wanted to be the one to write it. I manifested this for three years and it’s even more special than I could’ve imagined because this is a true collaboration among Latinos.”

Adds Huertas, “And the fact that we’re doing this on the No. 1 show on broadcast TV that everyone loves so much made it that much more special. But having Jonny and Zetna as my collaborators was the icing on the cake. They looked me in the eyes that first day and said, ‘We got you.’ So I wasn’t afraid of anything.”

Fuentes laughs as she recalls bumping into Huertas one day who excitedly “tackled her,” as he remembers it, to convince her to direct the “Miguel” episode. Their latest collaboration marks Fuentes’ second time directing on This Is Usher first was in Season 2.

“I remember reading that script and it was everything,” she says. “It really distilled this beautiful story of this one man’s journey, but it also meant everything to me because of how it represents the diaspora community. It was so specific and so beautifully written, but also it exploded in its meaning for my family and our families. I remember telling my husband what a dream it was. So, as a director, I was really just taking the cues and the clues from the page. It really unfolded like this beautiful story.” 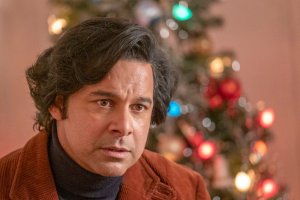 It was important to Huertas that the many layers that made Miguel the man he was authentic. As an Afro Latino whose family hails from Puerto Rico, Huertas and his character shared many life experiences.

“I have this history with my hair and growing up and having to straighten it to not get bullied, which I did. I was giving up my identity to fit in and to avoid conflict. So we worked that in early into the show as something Miguel did to climb the ladder at Lundy and in his life trying to assimilate,” he reveals. “We wanted to bring that back and fully realize that in this episode.”

Fuentes explains the “casting of actors that represented the colors of Latinidad was also crucial to telling this story.” As was representing the overlapping dialog of English and Spanish spoken by immigrant families in the US from Latin America.

Regarding Miguel and Rebecca’s love story, Gomez revealed there was already established history between the two that he worked into his script.

“We first meet Miguel as Rebecca’s husband in Episode 2 of the series and all this time in between we don’t know what happened. But for us writers, they’ve been married for 10 or 15 years by the time we meet them and they’re comfortable in their marriage at this point. But what I wanted to see is the moment they first realize it, and we started to get those moments earlier this season,” Gomez. “It was like, oh God, they have so much chemistry and it’s right there, but neither one of them knows it. Or if they know it, they’re not admitting it to themselves because they weren’t ready.”

While Huertas won’t share whether or not Miguel will appear in the finale episodes of the series, he did reveal what it was like saying goodbye to the character.

“Saying goodbye to Miguel was bittersweet but this episode was the perfect love letter to him,” he says. “Because it was such a collaborative episode, I feel like I had people right alongside me helping me say goodbye to the character in the right way. It just seemed so perfect that it made it less sad. On This Is Us, people die all the time but we stumble upon them again. As an actor, I’m the consummate time traveler on the show so you never know if he will come back and surprise you.”