About a two-hour drive from Indianapolis, Fort Wayne holds its own as Indiana’s second-largest city with a small town feel. At the convergence of three rivers – the st. Mary’s, the St. Joseph and the Maumee – and given the nickname “Summit City,” as it’s the highest point above sea level along the path of the Wabash and Erie Canal, the city has recreational spaces, kid-friendly places and a vibrant arts scene. Dining options go from casual stops to splurge-worthy spots. 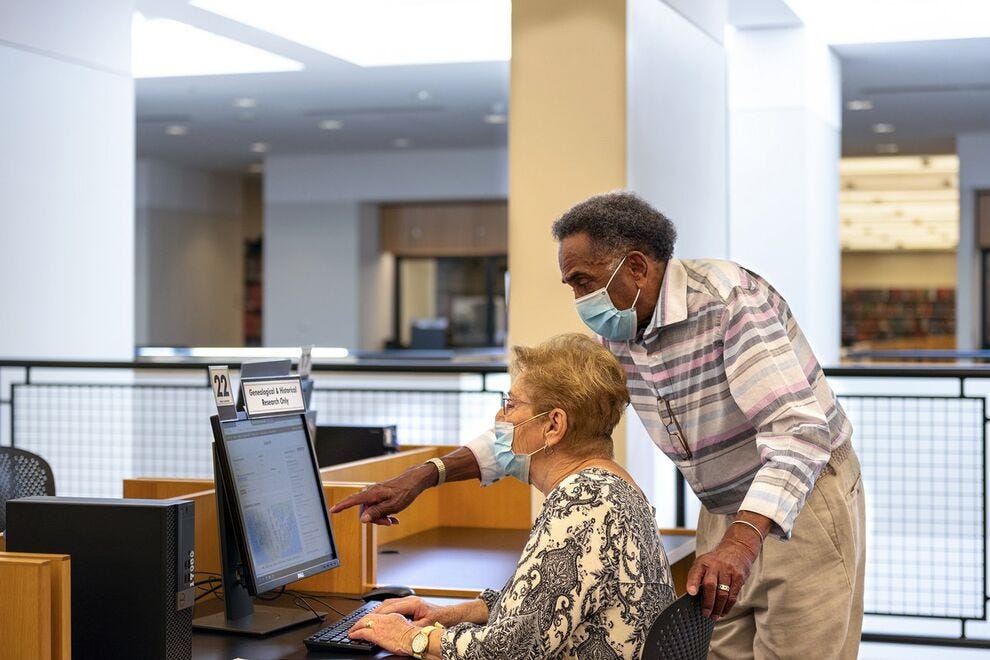 The Genealogy Center at the Allen County Public Library

If you’re stumped with finding out more about your family roots, The Genealogy Center provides a wealth of information. This second-largest genealogy center in the United States has a vast collection of databases and microfilm, as well as reference materials on surnames and geographical locations across North America, the United Kingdom and Europe.

Visitors can also access US census and military records along with other archival resources. In January 2022, and in cooperation with the Friends of the Lincoln Collection of Indiana, the library opened the Rolland Center for Lincoln Research, which provides an extensive compilation of research materials on our 16th US president. 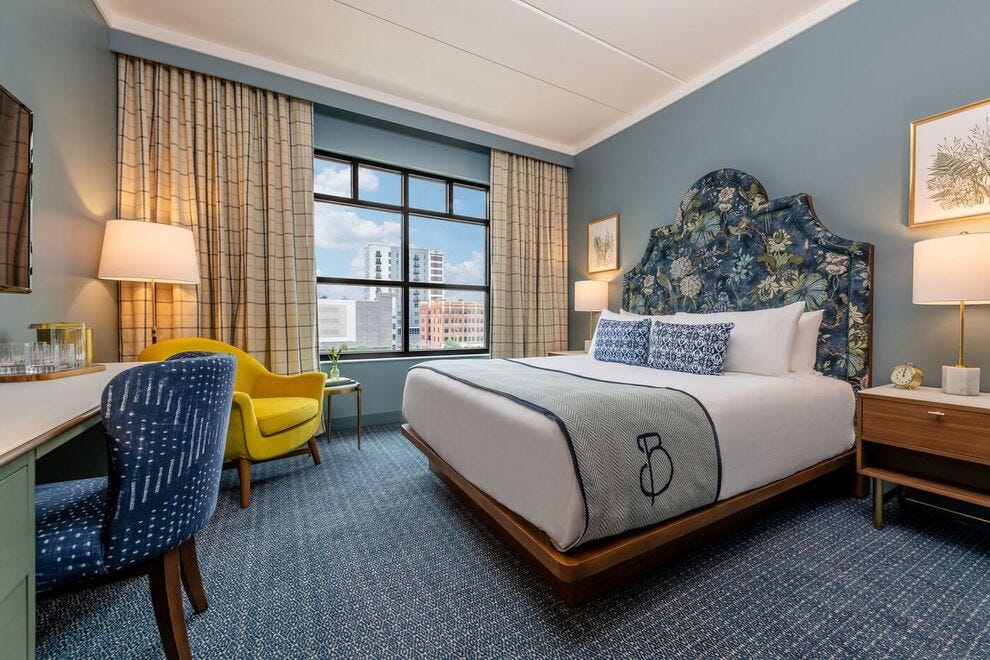 Opened in July 2021 in downtown Fort Wayne, this designer boutique hotel resulted from a collaboration between Vera Bradley’s co-founder, Barbara Bradley Baekgaard, and owner and operator Provenance Hotels. Along with touches reflecting this accessories brand, the property is full of locally sourced art, including work by Theoplis Smith III who’s known by his artistic moniker, Phresh Laundry. 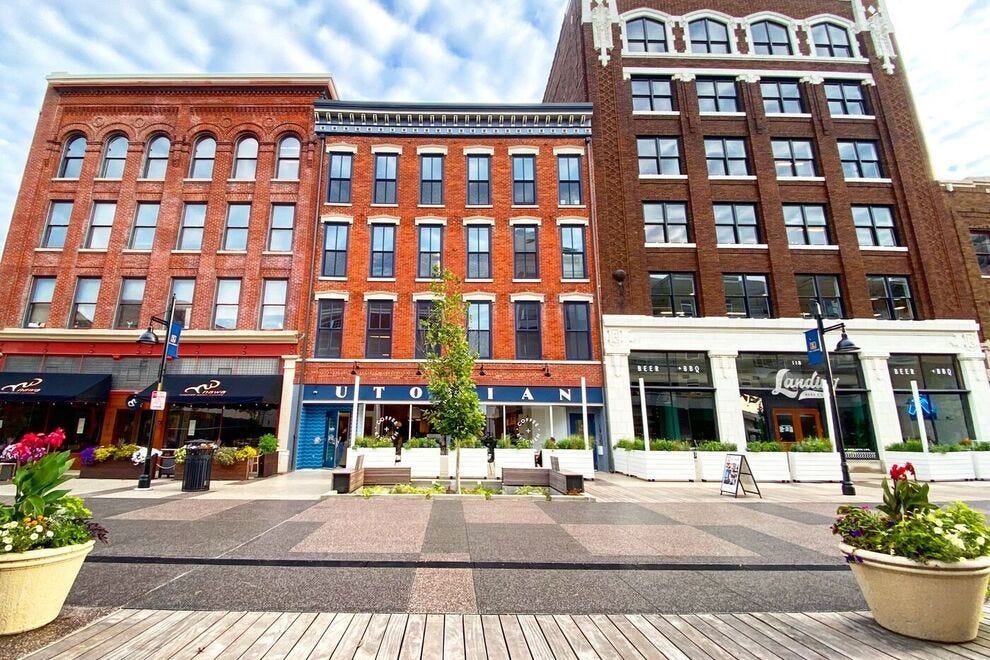 In the 19th century, The Landing was a major business hub with Fort Wayne’s first hotel, post office and theater. Today, this walkable and revitalized block near The Bradley has evolved into a place to work and live, with boutiques, locally-owned businesses, public art and an apartment complex. Festivals, performances and block parties also happen here. 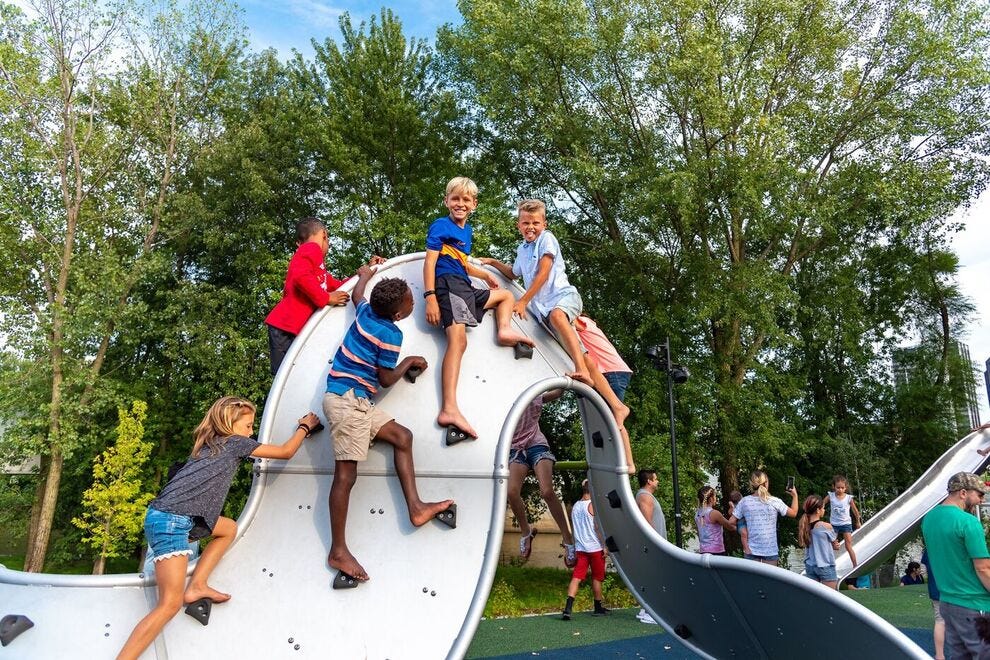 Having been built on the St. Mary’s, the St. Joseph and the Maumee rivers, Fort Wayne offers a lot of outdoor activities. Promenade Park is an urban green space with access to the rivers via kayak rentals or a boat cruise. The park also has land activities, such as a tree canopy trail, lawn games and an accessible playground.

The Fort Wayne Regional Trails Network is made up of over 120 miles of multi-use trails with many of them being interconnected. Among them, the Rivergreenway is a linear park spanning along the three riverbanks and linking city parks. 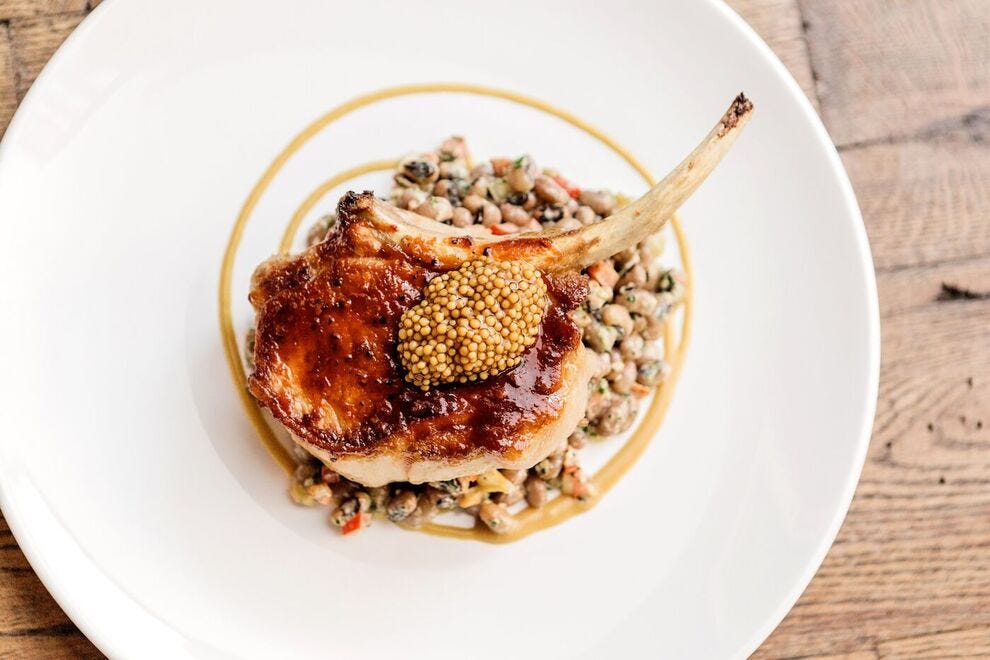 Where to dine out

From simple fare to upscale dining, Fort Wayne has many eateries to choose from. Cindy’s Diner is a throwback counter spot known for breakfast and lunch, especially their Garbage Plate (a medley of eggs, cheese, ham, onions and hash browns). Fort Wayne’s Famous Coney Island is a hot dog stand that’s over 100 years old and their namesake hot dog is a must-try.

Copper Spoon has an inventive Midwestern menu and extensive book of cocktails, wines and whiskeys. Club Soda has the vibe of an old-time supper club known for sizzling steaks and jazz, while Tolon provides an intimate farm-to-table experience. Saisaki prepares Asian-inspired cuisine and is known for their sushi, and Proximo centers on Latin fusion. Casa Ristoranti is a beloved Italian establishment, and One Love is a popular Jamaican soul food truck. 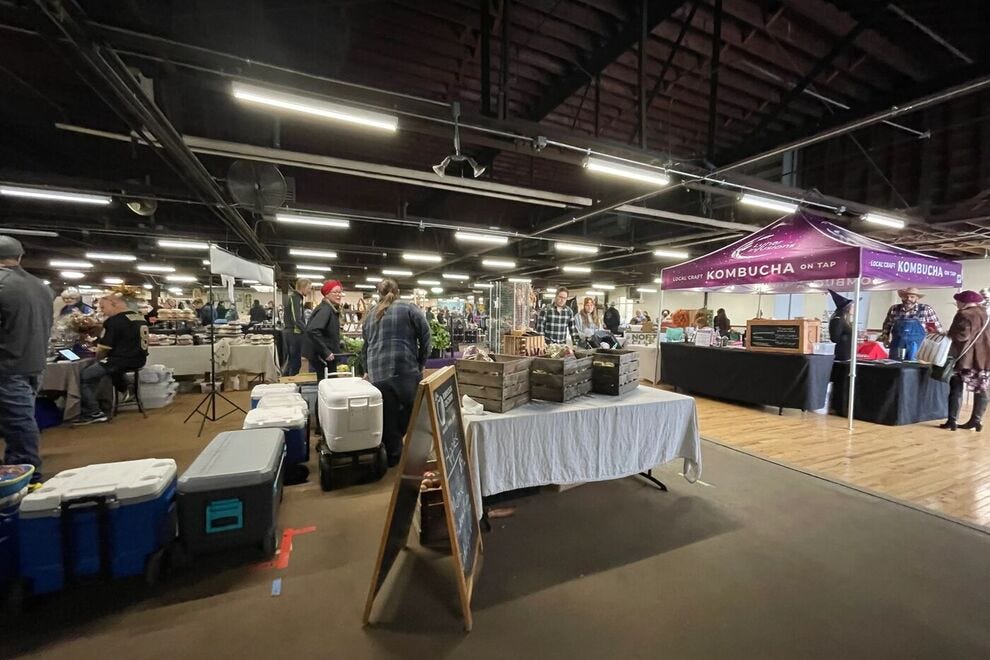 As farm-grown produce is bountiful in the Midwest, Fort Wayne has plenty of farmers’ markets for shopping for fruits, vegetables and other food finds. The YLNI Market holds their winter season at the Aunt Millie’s Perfection Bakery and summer schedule at the Barr Street Market.

Rose Avenue Farm is a refugee incubator that connects Burmese farmers with their farming roots. In the summer, they sell their produce at different locations in Fort Wayne; check their website for their schedule. And in the fall, explore Fort Wayne’s Apple Trail. 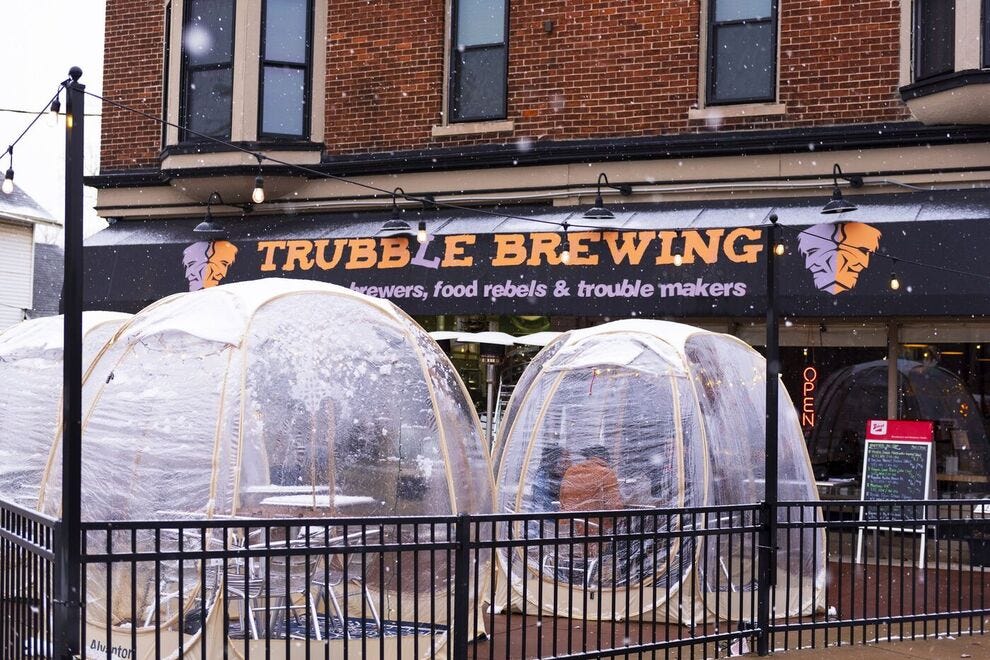 Having a significant German heritage, beer brewing remains a part of Fort Wayne’s identity. Situated along The Landing, the Landing Beer Company lists their current beers on tap on their chalkboard menu. It’s also a restaurant with Saturday brunch and other specials. Their creations include their New England IPA, “Hazy Landing,” and their “Wit of Orange,” a wheat beer brewed with the peels from this citrus fruit. 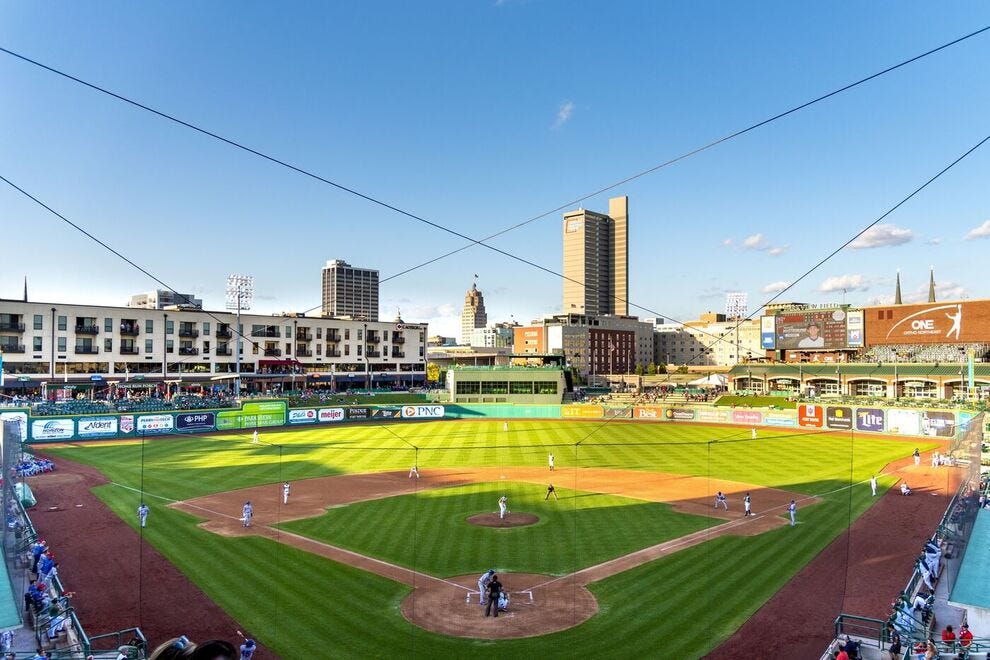 As a minor league sports city, Fort Wayne has many teams to root for while catching their home games. 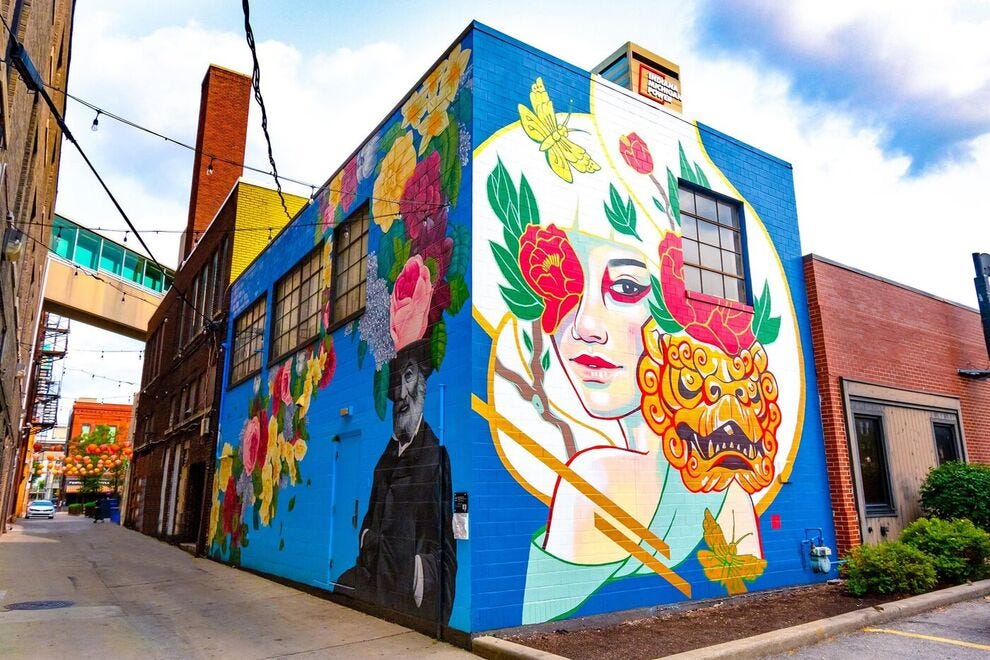 Arts Campus Fort Wayne is a cultural district with resident and presenting organizations offering year-round programming. As part of this campus, the Arts United Center was designed by Louis Kahn; it is his only building in the Midwest. It holds a 660-seat performing arts theater that is used by Arts Campus members, the Fort Wayne Ballet and Fort Wayne Civic Theatre. Other Arts Campus venues include the Allen County-Fort Wayne Historical Society and Fort Wayne Youtheatre.

Another way to explore art in Fort Wayne is through murals. The Fort Wayne Public Art Trail ties together over 150 pieces of public art in and around its downtown. Sign up for a digital pass to navigate to them. 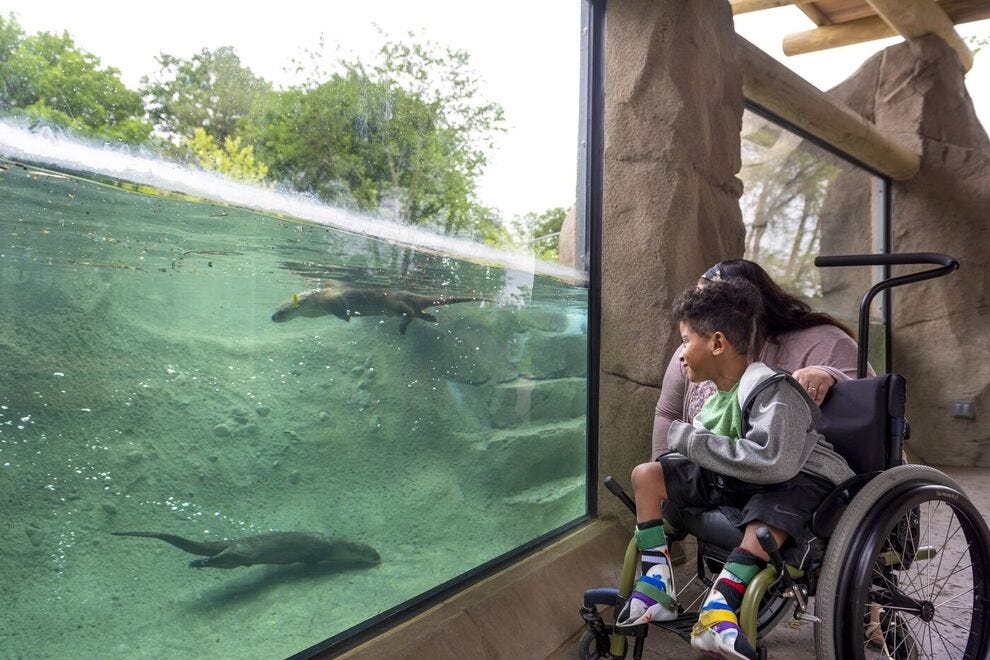 Fort Wayne has family-friendly attractions that can be enjoyed by even the youngest visitor. The Fort Wayne Children’s Zoo is made up of four themed habitats with its resident animal population encompassing amphibians, reptiles, birds, fish, mammals and arthropods. For a fee, visitors can feed giraffes or head out on various rides throughout the zoo.