Frisco leaders have talked about creating a new performing arts center since the early 2000s.

The project has been ranked among the city’s top 10 priorities — lined out annually during City Council’s winter workshop — for several years. It has also prompted the launch of a performing arts-focused local Facebook group and garnered citywide attention through petitions and comments from citizens.

When Frisco announced in late June its public-private partnership with Frisco ISD and developer Craig Hall from the Hall Group, many residents cheered on the long-awaited arrival of the venue. The venue will be built at Frisco’s Hall Park, a large office campus. Although design and construction can take up to 36 months, Mayor Jeff Cheney said the venue is slowly becoming a reality.

Frisco ISD recently selected an architect for the project during its Feb. 15 school board meeting. Project partners have entered an agreement to conduct an analysis of the space, said Frisco ISD spokeswoman Meghan Cone. The analysis, Cone said, will help determine a budget for the project.

Plans for the venue include a main performance hall between 1,250 and 1,500 seats, owned by the district, and a smaller community venue between 250 and 350 seats, owned by the city. The number of seats depends on funding from the private sector and community, though they are capped at 1,500 and 350, respectively.

The venue will also include a multi-story parking garage with 1,100 spaces and a five-acre park with a playground similar to Klyde Warren Park in Dallas.

“One concept that we’re exploring heavily right now is how we can make this facility future-proofed, so it can grow and expand as the community grows and expands,” Cheney said.

During a Frisco Chamber of Commerce luncheon in late August, Frisco leaders announced a campaign to help fund the development. The HEARTS Project — an acronym for Hall, education and the arts — sought to collect $100 million in funds and donations, in addition to the $67 million that had already been invested.

Project leaders initially scheduled the HEARTS campaign to end Jan. 1, before developers began working on drawings Jan. 3, but Cheney said the campaign has temporarily been put on hold.

“[After] meeting with corporations and other people that like to invest in the arts, there was a great deal of interest from the private sector in the project,” Cheney said. “But the people who were looking to potentially be partners or [offer] sponsorship deals want to know what the final plans look like.”

Cheney still expects that campaign efforts will “substantially improve the project when the right time comes” and would support the city’s goals.

If the community raised the additional $100,000, the facility would be comparable to Lubbock’s new Buddy Holly Hall or Bass Performance Hall in Fort Worth, according to the campaign website. 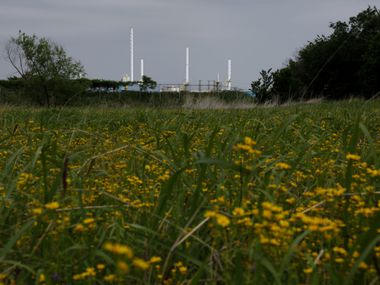