“This is the path to my One Perfect Shot.” Here we go! Our friends at Film School Rejects have been quietly developing this project for the past few years and it’s time to finally shine! One Perfect Shot is a cinema series on HBO Max inspired by the Twitter account exploring some iconic moments in movie history. One Perfect Shot features the careers of 6 visionary filmmakers recounting how they’ve created some of the industry’s most iconic shots. This is the second cinema series recently along with Netflix’s Voir, also created by a movie blogger, discussing the magic of movies. Hosted by Ava DuVernay and featuring Jon M. Chu (examining Crazy Rich Asians), Kasi Lemons (examining Harriet), Patty Jenkins (examining Wonder Woman), Malcolm D. Lee (examining Girls Trip), Michael Mann (examining Heat), and Aaron Sorkin (examining The Trial of the Chicago 7). A bit of a strange choice of films, but so be it. They also go “into” each shot, walking through the scene in 360 degree moments to discuss how they made it. I also hope they bring in some cinematographers in addition to the directors next time. Check this out.

Here’s the official trailer (+ poster) for the HBO Max series One Perfect Shotdirect from YouTube: 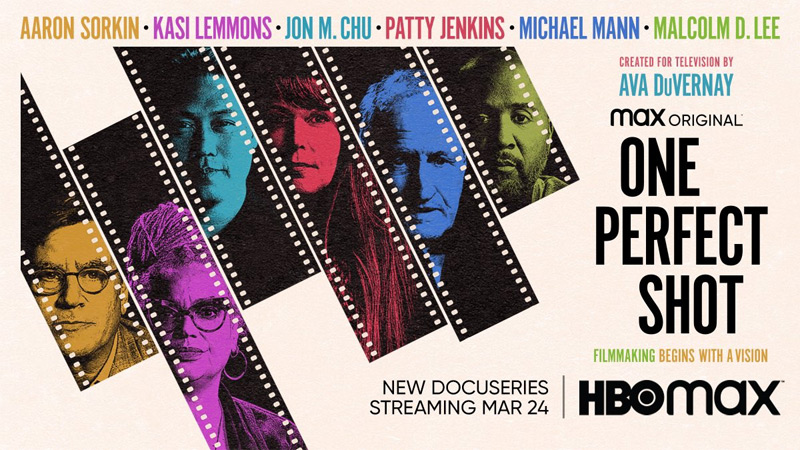 Created for TV by Oscar and Emmy-winning filmmaker Ava DuVernay, the new docuseries is inspired by the Twitter account of the same name and puts the spotlight on “celebrating impactful movie moments guided by Hollywood’s most exhilarating cinematic voices.” Each episode arms an acclaimed director with an arsenal of visual tools to pull back the curtain on their most iconic shots. Directors “enter” each shot, walking through the scene in 360 degree moments that allow viewers to join an immersive exploration of moviemaking. Filmmakers share their obstacles, challenges, lessons and triumphs as they detail the road to their one perfect shot. One Perfect Shot is a series developed by Ava DuVernary (I Will Follow, Middle of Nowhere, Selma, A Winkle in Time, “When They See US”, “Colin in Black & White”). Produced by Warner Bros. Unscripted Television in association with Warner Horizon, ARRAY Filmworks, and One Perfect Shot. It’s executive produced by DuVernay, Paul Garnes, Bruce Robertson, Neil Miller, and Sonia Slutsky. HBO will debut the One Perfect Shot series streaming starting March 24th, 2022 coming soon. Who’s down?