The public will have the chance to comment on a proposed multi-use entertainment center Monday before the Jefferson City Council votes on the development plan.

If the City Council approves the bill, it would authorize a development plan, development agreement and partial tax abatement for the redevelopment of 2017 Christy Drive, where the old Capitol Bowl was located before it was demolished due to tornado damage. DGVGB LLC plans to develop Striker’s Grill & Tornado Alley, an entertainment center that includes bowling, video games, pool tables, an arcade, a restaurant and a bar.

DGVGB LLC estimated improvements to the property will cost more than $4.1 million, according to its business plan.

If the council approves the bill, it would abate 75 percent of the real property taxes on improvements for a 10-year initial period and 50 percent of all real estate taxes for a 15-year next ensuing period.

Before voting, the council will hold a public hearing so anyone in favor or opposition of the bill can speak.

• The City Council will discuss a couple of grant agreements Monday with the Missouri Department of Transportation.

The first bill, if approved, would authorize the city to enter into a $124,540 grant agreement with MoDOT to purchase two high-roof paratransit buses. These new buses would replace two buses that have more than 200,000 miles, according to the proposed bill.

The second bill, if approved, would authorize a $11,018 state operating assistance grant agreement with MoDOT for JeffTran transit services. The grant is to help “defray a portion of the costs agencies like JeffTran incur providing transit services to the community,” according to the bill summary.

The grant would require a 50 percent local match.

• The council will hear a bill that would amend Chapter 34 of the city code to require an aircraft that becomes disabled at Jefferson City Memorial Airport and is in an area that interferes with or creates a hazard for other aircrafts to be removed as quickly as possible . If the owner could’t remove the aircraft, the city would have it removed at the owner’s expense, according to the proposed bill.

“This ordinance is proposed to protect the City from exposure to claims in the event that we have to call a recovery service after an accident or incident,” according to the bill summary. “There have been no issues so far with this, but the City wants to be prepared.”

• Also on Monday, the City Council will also review a couple of proposed bills that propose amending Chapter 19 of the city code, which covers motor vehicles and traffic.

The first bill, if approved, would amend Chapter 19 of the city code to prohibit parking on the north side of Riviera Street, from East Capitol Avenue through Sullivan Street; prohibit parking on the east side of Mulberry Street, from Dunklin Street through Cedar Way, 6 am-5 pm Monday through Friday; and extend a prohibited parking area on the south side of Oscar Drive near Christy Drive.

City staff estimated it would cost $1,000 in labor and materials to install signs and markings.

The second bill, if approved, would amend Chapter 19 to modify parking in the 100 block of Bolivar Street and in front of 700 W. Main St. Changes would include adding two-hour parking spots, all-day parking spaces, loading zones and moving Capitol Police parking spots.

City staff estimated it would cost $6,000 in labor and materials

• The council will hear a bill Monday that would authorize the city to vacate a sanitary sewer easement at 2937 Hillview Drive. The city worked with the property owner to relocate a small force main on the property, according to the bill summary.

The council will vote on a bill Monday that would amend a grant agreement with MoDOT.

The city entered into a $202,931 grant agreement with MoDOT in December 2020 to fund replacement airfield lighting that was damaged by flooding. Even though the project was completed, the final project work didn’t happen before the final date outlined in the grant agreement due to equipment delivery issues. The amendment would extend the grant so all project expenses would be grant eligible.

Also on Monday, the council will discuss and potentially vote on a proposed resolution that, if passed, would allow the council to ask the Jefferson City Parks and Recreation Commission about merit pay increases.

The resolution states the council would ask the commission if the Jefferson City Parks, Recreation and Forestry Department “will continue to grant merit increases, even though the City Council did not fund a merit program?”

The council stated in December 2021 that pay-per-performance raises were not included in the city’s budget, but the parks department offered these raises in recent years since the city charter states the Parks and Recreation Commission controls the department’s budget. The council has discussed re-examining the city charter to potentially modify the commission’s authority.

The City Council’s December statement was only a recommendation to the commission, which can use its revenue as it wishes, under the city charter.

The proposed resolution, sponsored by Ward 3 Councilman Scott Spencer, asks the commission to answer this question by official action within 45 days.

Missouri announced last fall it received more than $2.6 billion in ARPA funds from the federal government.

• The City Council will hear an update on Monday regarding Capitol Avenue and the pandemic.

The City Council will meet in person at 6 pm Monday at City Hall, 320 E. McCarty St. Due to COVID-19 and social-distancing recommendations, community members can also attend virtually by visiting jeffersoncitymo.gov/calendar.php and clicking on the City Council meeting event. Residents can also view the meeting live on the city’s YouTube page.

Ethan Weston/News Tribune Eric Greene throws a bowling ball down the lane on Friday, Feb. 4, 2022 at Strikers in Jefferson City, Mo. Greene works for Brunswick Bowling and was demonstrating a selfie while you bowl system to employees. 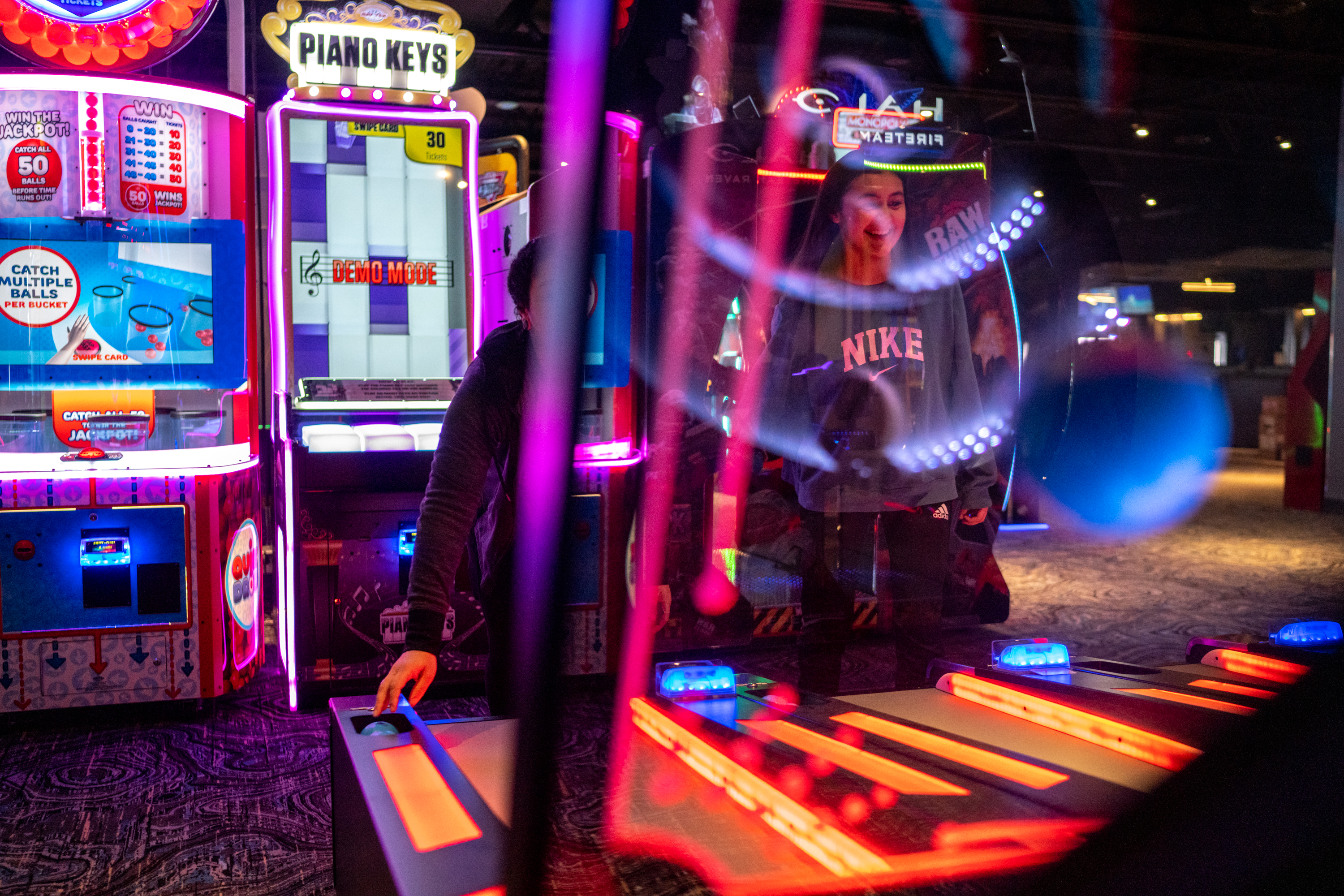 Ethan Weston/News Tribune Destiny Ross and Bri Scott test some of the arcade games on Friday, Feb. 4, 2022 at Strikers in Jefferson City, Mo.