Calling all ARMYs. BTS’ Grammys 2022 photos prove they’re smooth like butter (and their fashion sense is too.)

The K-pop group—which consists of members Jin, J-Hope, RM, Suga Jimin, V and Jungkook—walked the red carpet at the 64th annual Grammy Awards on April 3, 2022, at the MGM Grand Garden Arena in Las Vegas , Nevada. The award show is the third time the boy band has attended the Grammys. Their first appearance was at the 61st Grammys in 2019 followed by the 62nd Grammys in 2020, where they were featured in Lil Nas X’s performance of “Old Town Road” and “Rodeo.” Though they performed at the 63rd Grammys in 2021, the group didn’t physically attend the award show, which was held in Los Angeles, California. The band recorded their performance in Seoul, South Korea, where they’re based.

BTS is nominated for one category at the 2022 Grammys: Best Pop Duo/Group Performance for their 2021 song, “Butter.” The nomination marks the second time BTS has been nominated at the Grammys after their first nomination in the Best Pop Duo/Group Performance category in 2021 for their 2020 song “Dynamite” from their album Be. The nomination made them the first K-pop act to ever be nominated at the Grammys. “We’re overwhelmed to be called representatives of Korea. We’re just thankful for the support and attention that we’ve received, not only from our fans but our peers,” Jungkook told the Grammys at the time. “We will continue to work harder to showcase even better music and performances. And it’s an incredible honor to be the first Korean pop artist to be nominated for a Grammy, and we hope that this is just the beginning. A win would be significant not only for us but for many who pursue diversity in music.”

But back to the fashion. Read on for photos of BTS’ Grammys 2022 look and for more about their appearance the award show.

BTS wore monochromatic suits from Louis Vuitton’s Fall 2022 Menswear collection, Virgil Abloh’s last collection with the fashion house, at the 64th annual Grammy Awards. J-Hope and Suga wore white; RM and V wore red; Jungkook and Jimin wore blue; and Jin wore tan. BTS have been ambassadors for Louis Vuitton since April 2021. “I am delighted BTS are joining Louis Vuitton today,” Abloh said in a statement at the time. “I am looking forward to this wonderful partnership which adds a modern chapter to the House, merging luxury and contemporary culture. I can’t wait to share all the very exciting projects we are working on.”

BTS’ appearance at the Grammys came days after the group’s company, HYBE, announced that Jungkook had tested positive for COVID-19 after arriving in Las Vegas for the award show. “We would like to provide you with some information on BTS member Jung Kook being diagnosed with Covid-19,” the statement read. “Jung Kook was tested negative on a PCR test in Korea, and he departed for the United States on Sunday, March 27 (KST) in preparation for the Grammy Awards performance. After arriving in Las Vegas, he felt a slight discomfort in his throat and promptly took a rapid PCR test (Covid-19 molecular PCR test) and a standard PCR test (Covid-19 quantitative PCR test) on the afternoon of Sunday, March 27 (PT).” 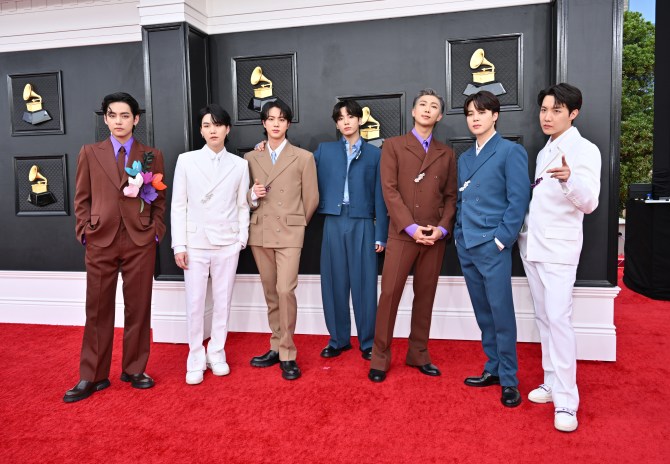 HYBE noted that it was following the guidelines of authorities in the United States and Jungkook was experiencing no symptoms other than a “mild sore throat.” HYBE also added that Jungkook’s appearance at the Grammys would be “determined by local regulations on COVID-19” and that the company was also in active “discussions with awards organizer[s]“We would like to extend our sincerest apologies to our fans for causing you concern despite our effort to take all necessary measures for our artists’ health prior to and throughout the schedule in the United States,” the statement continued. 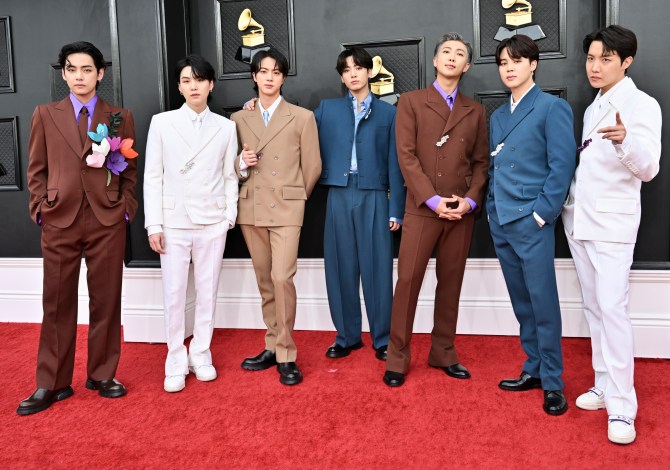 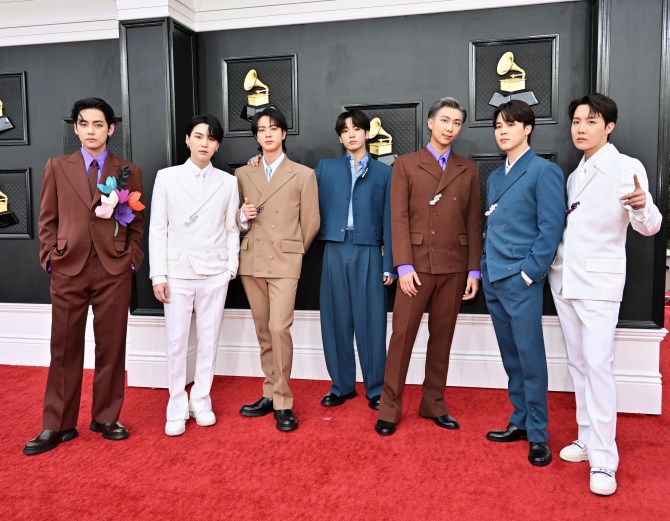 What are BTS’ Grammys 2022 nominations?

BTS is nominated in the Best Pop Duo/Group Performance at the Grammys 2022 for their 2021 song, “Butter.” They’re nominated against Tony Bennett and Lady Gaga for I Get a Kick Out of You”; Justin Bieber and Benny Blanco for “Lonely”; Coldplay for “Higher Power”; and Doja Cat and SZA for “Kiss Me More.” Rogét Chahayed—who produced Max’s “Beautiful Eyes” featuring BTS member Suga—is also nominated for Producer of the Year, Non-Classical.

BTS earned their first Grammy nomination in the Best Pop Duo/Group Performance category in 2021 for their 2020 song, “Dynamite,” from their 2020 album, Be. The group lost the award to Lady Gaga and Ariana Grande’s “Rain on Me.” BTS member Jungkook told the Grammys at the time about the group becoming the first K-pop act to be nominated the Grammys. “We’re overwhelmed to be called representatives of Korea. We’re just thankful for the support and attention that we’ve received, not only from our fans but our peers,” he said. “We will continue to work harder to showcase even better music and performances. And it’s an incredible honor to be the first Korean pop artist to be nominated for a Grammy, and we hope that this is just the beginning. A win would be significant not only for us but for many who pursue diversity in music.”

BTS is one of 15-plus performers at the Grammys 2022, along with artists like Lady Gaga, Olivia Rodrigo and Justin Bieber. The Grammys 2022 marks the third time BTS has performed at the Grammys. Their first performance was at the 62nd Grammys in 2020, where they were featured in Lil Nas X’s performance of “Old Town Road” and “Rodeo” along with Billy Ray Cyrus, Diplo, Mason Ramsey and Nas. BTS’ second performance was at the 63rd Grammys in 2021, where they performed “Dynamite” from their 2020 album, Be.

How to watch BTS Grammys 2022 performance online for free

How can ARMYs watch BTS’ Grammys 2022 performance online for free? Read on for the tips and tricks to stream the Grammy Awards at no cost.

Sling TV’s free trial is an excellent option to watch the Grammys 2022 for cheap. Sling offers two plans: Sling Blue and Sling Orange. (Sling Blue is more suited for news and entertainment, while Sling Orange is better for sports and family.) Both include a three-day free trial and cost $35 per month after the trial ends, if one chooses to subscribe. Both also offer 50 hours of DVR and local channels like CBS, which is where the Grammys 2022 airs. If you had to choose one, though, we recommend Sling Blue to watch the Grammys 2022. Not only does the plan include more channels, but it also allows the user to stream on three devices (Sling Orange allows only one), which means that you can split the cost with two other people, who can stream on their own devices. (That’s just $3.33 per person.)

The best way to watch the Grammys 2022 online for free is with Fubo TV’s free trial. Fubo TV offers a seven-day free trial, which is more than enough time to stream the Grammys 2022. Along with CBS, Fubo TV offers more than 100 channels, including NBC, CNN and ABC, at least 250 hours of DVR and a streaming library with hundreds of hours of TV shows and movies. After the free trial ends, Fubo TV costs $64.99 per month, so be sure to cancel it before you’re charged.

Our mission at STYLECASTER is to bring style to the people, and we only feature products we think you’ll love as much as we do. Please note that if you purchase something by clicking on a link within this story, we may receive a small commission of the sale.