Drag Queen Story Hour was canceled at a library in Brighton today (Thursday 4 August) after protests at two earlier events.

The event was called in Woodingdean where protests off again centered on 27-year-old Sab Samuel, known as Aida H Dee, a drag performer and author.

Mr Samuel, a patron of Autistic Inclusive Meets London, has faced protesters elsewhere in the country over the children’s story time events, with scuffles in Brighton and two arrests in Hove today.

Campaigners for and against the event gathered outside Woodingdean library, in Warren Road, before staff announced that Aida H Dee would not be leading story time.

There were significantly fewer campaigners outside Woodingdean library compared with the scores who went to the Jubilee Library, in Brighton, and the Carnegie Library, in Hove, earlier in the day.

About 30 people turned out in Woodingdean where parents and their children had to run a short gauntlet of protesters handing out leaflets.

One mother tearfully said: “No, I don’t want your leaflet.”

And one father gave LGBTQ+ protesters a thumbs up.

Conservative councillor Dee Simson, who represents Woodingdean ward, went along to the event, having already booked a place.

Brighton Kemptown MP Lloyd Russell-Moyle was also there. He had been heading to his office in Woodingdean, he said, and wanted to see how things were going.

He said: “It’s very strange. I would say the protesters are deeply un-British and unpatriotic because it’s a long British tradition that we’ve had pantomime and people dressing up and bending gender in that fun activity for children.

“This is just another variation of that. It’s taking these British traditions and adapting them for the real world.

“What they want is to import some kind of American culture war, these protesters against this, some capitalist American monoculture rubbish.

“This is about the beautiful diversity that we see in Britain and Europe and all over the world.”

One supporter, Frank, 23, from Brighton, went to all three events and said that the opposition seemed more violent as the morning progressed, adding: “I would describe the other side as fascists as they were using anti-semitism and talking about the ‘new world order’ to say we’re harassing kids which is nothing to do with it.

“I’m here to make sure people like me don’t get assaulted. It’s scary.”

Piers Corbyn, a former TV weather presenter, also went to all three protesters, and appeared to align with the far-right Patriotic Alternative group at the demo outside Hove library.

Mr Armstrong said: “He just shouted a lot of abuse at me and said I don’t have an argument. There are a lot of parents who have bought their kids here to have some stories read to them.

“But this has been cancelled because people have turned up accusing us of paedophilia and all sorts of ridiculous things.

“We are here to support love, respect and equality. We just see it as someone dressed up, reading stories to the kids.” 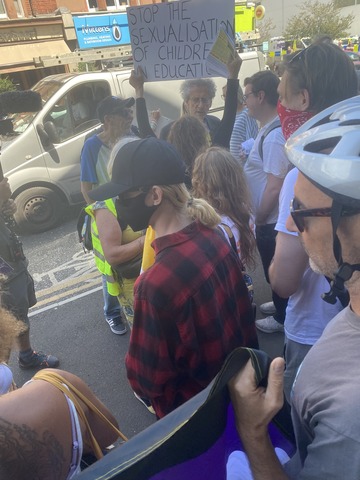 Hove resident Liz Brynin, 75, attended the Woodingdean protest only because she objects to drag for children and is concerned about the messages that the story sends to them.

She said: “It’s an insidious introduction to quite a dark world with a lot of very unhappy people.

“It’s normalising it, which if you’re 18, that’s fine. If you’re eight, three or four, no. The theme of Aida H Dee’s storybook, the Three Goats United, the end of the story has a goat poo on the wolf’s head, which is treated as a joke, and I find that a disturbing message.

“I have grandsons, and I know what young kids are like with poo. It’s a joke. They think it’s funny and parents have to work very hard to teach them it’s not healthy and pooing is a private business. You don’t talk about it in polite society.”

After the protests, the Green group of councillors on Brighton and Hove City Council said in a statement: “We proudly support the events held in our libraries and stand with the protesters who said no to fascism.

“As a city, we are welcoming, open and diverse – and we will always represent those values.”

Labor councillor Amanda Evans said: “In this week when we celebrate our diverse LGBTQ+ community with the first full-scale Pride events since 2019, the Labor group fully supports the city’s libraries program as a whole and the Drag Queen Story Hour in particular.

“We are very proud of our inclusiveness and diversity as a city and so pleased to welcome Aida H Dee as a performer and professional children’s entertainer.

“We are also pleased to note that many more people – including Labor members and Kemptown MP Lloyd Russell-Moyle – turned out to support the events than the small group of misguided protesters who objected to them.”