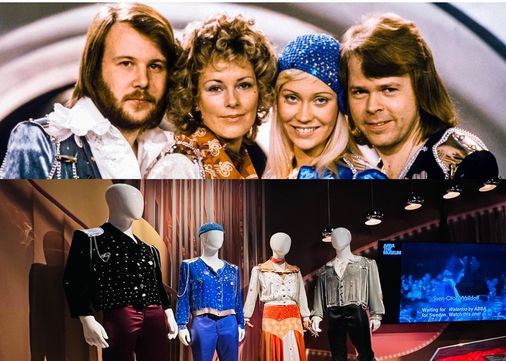 Stockholm may be the capital of Sweden, but for the ABBA-obsessed, this is the musical holy land. Examining the band’s “Waterloo” outfits in person or seeing the apartment building where Björn Ulvaeus and Anni-Frid Lyngstad lived in the 1970s excited me the way that meeting Tom Brady might excite other Bostonians. You can keep Brady, I’m much more fascinated by the intricately-layered songs written by Ulvaeus and Benny Andersson. I may have gotten drenched by persistent rain in Stockholm, but no amount of rain could dampen my excitement over this long-overdue ABBA pilgrimage.

Get The Big To-Do

Your guide to staying entertained, from live shows and outdoor fun to the newest in museums, movies, TV, books, dining, and more.

The easiest and most effective way to start exploring ABBA’s legacy in Stockholm is at ABBA The Museum. The museum has been open for nearly 10 years, but this was my first visit, hence the tingling at the sight of the aforementioned “Waterloo” polyblend outfits on display here. I’ve been to both the Liverpool Beatles Museum and now the ABBA museum, and, at the risk of getting smacked in the face with a silver platform boot and a bedazzled blue crochet cap, I have to say that the ABBA museum packs a bigger punch.

Stop cursing and allow me to explain. The Beatles museum is a collection of memorabilia. It is, by definition, a museum. The ABBA museum has memorabilia for days (ABBA brand clogs anyone?), but it also has simulated recording booths where you can get in touch with your inner Agnetha and belt out ABBA hits. There’s also a stage where you can dance along with ABBA holograms. The hologram technology is a little dated compared to ABBA’s new avatar show in London, but it’s still fun to get on stage and embarrass yourself in front of other visitors. This museum is best described as an immersive experience. I even sat in the helicopter featured on the cover of ABBA’s “Arrival” album and the bench that appears on the cover of the band’s 1976 greatest hits album — or at least a very close approximation to the famous bench.

The museum has a new restaurant and also shares an entrance with the Pop House Hotel. Pop House has ABBA-themed rooms and I came very close to booking one of those rooms. However, the hotel is currently being renovated and will be renamed Backstage in September. It’s transforming into a boutique hotel. I’m not sure how different it will look after the renovation, but it gives me an excuse to come back to Stockholm in September, so I’m fine with it.

There are other ABBA-related lodging options in Stockholm. I zeroed in on Hôtel Rival, a hotel actually owned by a member of ABBA. Located in a converted art deco cinema in the neighborhood of Södermalm, the hotel is owned by Andersson and says “ABBA” in subtle ways. There was a large, tasteful black and white photo of the band above my headboard. The photo was printed on a window shade that could be rolled up if you didn’t want to look at ABBA. But if you don’t want to look at ABBA, why on earth would you book a room at a hotel owned by a member of ABBA? Rooms average around $200 a night depending on seasonal demand.

Even if you’re not an ABBA fan (for shame!), I’d still recommend Hôtel Rival. It’s a comfortable respite in the city located directly across from leafy Mariatorget park and near several pubs, taverns, restaurants, and cool shops. It also has a killer cocktail bar, which is ideal for people-watching on a Saturday night.

From Hôtel Rival, I began a deep dive into ABBA’s Stockholm roots. This may sound like the act of a deranged ABBA fanboy, and, well, it is. But it’s also a convenient way to explore Stockholm. I have long been in love with the 1982 ABBA song “Head Over Heels.” It was released as the band’s popularity was rapidly evaporating, so it’s criminally overlooked. The video for the song stars Lyngstad running through downtown Stockholm, dropping into shops, and generally acting frantic with a crazy raspberry-rine coiffure. So, I did what any semi-normal ABBA fan would do. I found the locations where the video was filmed and visited them all.

Thanks to the video, I found myself at NK (Nordiska Kompaniet), Sweden’s most luxurious department store. It’s like the Harrods of Stockholm. I guess even ABBA shops retail. If you’re not looking to shop, the department store has an expansive food hall with Swedish delicacies, plus an Italian cafe, a bakery, and a restaurant run by chef Björn Frantzén, who is described as “Sweden’s answer to Gordon Ramsay.” You can even get afternoon tea at NK. It’s all housed in a beautifully designed 1915 building.

Would I have come here if it wasn’t for ABBA? Well, probably. But let’s not dwell on details.

A big ABBA hangout, as evidenced by multiple photos of the band and album covers, was the island of Djurgården. It’s the city’s greenest island and is packed with museums, including the ABBA museum. Once you finish spending all your kronor at the ABBA museum shop, stroll to the Vasa Museum. The maritime museum takes its name from the impressive 17th-century ship on display. The Vasa may have sank on its maiden voyage in 1628, but how many other 17th-century ships are still and have a museum named after them intact? I’ll give you a hint: The answer is none.

Another ABBA favorite on Djurgården is a curious place called Skansen. It’s the world’s oldest open air museum spread over 75 acres. It features 150 buildings brought from all over Sweden, dating back to the 18th and 19th centuries, plus small farm plots and animals that you might have encountered in pre-industrialized Sweden. It’s like Old Sturbridge Village or Colonial Williamsburg, but with wild boars and bears. There’s also a modern zoo with animals from Africa, a Baltic aquarium, a science center, and multiple dining options. If you’re not feeling ambitious you can just sit on the grass and look across the water to the city center.

My main goal at Skansen was to get into Julius Kronberg’s art studio, which was built in 1889 and was moved to Skansen after his death. ABBA used the interior of Kronberg’s studio to shoot the cover of its 1981 album “The Visitors.” The studio still looks the same as it did during that photo session, or so I was told. If you’re lucky you can find a day when the studio is open. It’s only open one month each year. What month do you ask? When you figure that out please let me know. I’m still searching for the answer.

The magic of ABBA continued to guide me to some of the most picturesque spots in Stockholm. Andersson performed his first gig at Stockholm City Hall. The grandiose 1923 brick structure sits on the tip of Kungsholmen Island and is surrounded by Lake Mälaren. In addition to its importance to ABBA historians, it’s also one of the most celebrated pieces of architecture in Stockholm. I also heard something about it being the location of the Nobel Prize banquet every December. Public tours of the building are available June through August.

It’s difficult to traverse Stockholm and not encounter bits of ABBA history. I even sought out the Sheraton where parts of “ABBA: The Movie” were filmed. You can see (the exterior of) Polar Studios, where the band recorded its last three albums. ABBA The Museum has re-created the studio as it would have looked in the late 1970s and early 1980s when the band was active there. The ornate Royal Opera House is where ABBA performed “Dancing Queen” in ridiculous 18th-century garb on the eve of the wedding between Sweden’s King Carl XVI Gustaf and Silvia Sommerlath in 1976. Naturally I needed to go there as well.

ABBA’s platform shoe prints are everywhere, including the stunning Stortorget Square. Many of the most photographed buildings in the square date back more than 200 years and were designed in a German-Dutch Renaissance style.

Given that I was surrounded by history and tourists in Stortorget Square, I was pleasantly stunned to stumble into an innovative cocktail bar called Pharmarium. The interior looked like a blend of a 16th-century apothecary and a 1920s speakeasy with a smattering of a Nordic hunting lodge. The menu featured a cocktail called the Electro Lover, which caught my attention because it was described as “a boozy bubblegum reformation of a piña colada. If a drink could be a soundtrack, this is it.” Yes please!

I took a sip, and it tasted exactly as described — deliciously boozy adult bubblegum in a glass. I took another sip and realized that if ABBA’s music had a flavor, it would be this cocktail. Like the drink, the band’s music is tasty, has hints of bubblegum, but is also complex and carefully crafted. Or, perhaps I came to this deep philosophical conclusion because I had spent a week obsessing over ABBA and was getting drunk on a cocktail that tasted like bubblegum in Stockholm.

Either way, I was ready for another round, and, more importantly, another song.