Amazon’s Clubhouse competitor has arrived. The retail giant on Tuesday launched a new mobile app called Amp, which allows people to create live “radio shows” where they can act as a DJ by taking callers and playing tracks from its catalog of tens of millions of licensed songs, ranging from classic titles to today’s music. The app is available in a limited US beta, Amazon said.

“It’s easy to share your voice and favorite songs with the world on Amp,” the app’s description on the App Store says. “Decide on a show title, create a playlist, and you’re just seconds away from streaming your own radio show.”

The new app, which was previously reported by The Verge when in development under the name Project Mic, represents Amazon’s somewhat belated entry into the live audio market. While the app Clubhouse led the way by establishing a new format for live audio social interactions, the idea has since been spun out into numerous competitors — each with their own angle, including Twitter’s Spaces, Facebook’s Live Audio Rooms, Spotify’s Greenroom, and those from smaller startups, like the Mark Cuban-backed Fireside or David Sacks-backed Callin.

However, for the most part, these Clubhouse rivals have focused on talk — like live podcasts. Amazon’s Amp differentiates itself by providing access out of the gate to a broad music catalog. That means Amp users can play DJ, streaming and chatting about their favorite songs and artists to establish themselves as a creator. Or they can use the app to talk about anything else — like sports or pop culture, for example — but do so while also curating a selection of music for their listeners and taking live callers.

According to Amp’s App Store description, creators will also be able to pre-plan and schedule their shows, alert listeners to their upcoming speaking shows, control who when taking live callers and more. Notably, creators do not have to pay the labels when accessing the music for their show, the app’s listing notes.

Users will sign in using their Amazon credentials or can create a new Amazon account to use Amp. Amazon also provides a 24/7 moderation team that reviews the reports and takes actions in real-time. 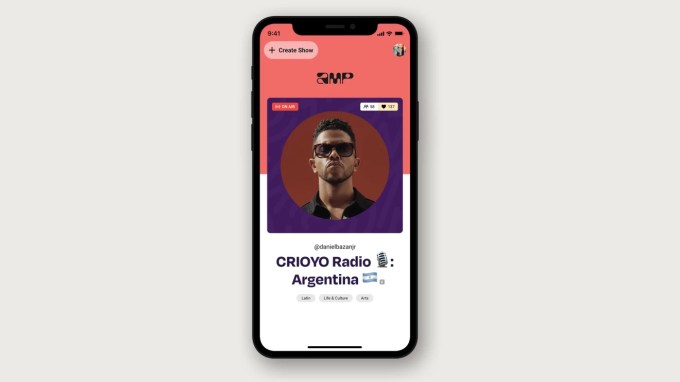 After publication of this story, Amazon announced the news of Amp’s arrival via a blog post in which the company mentioned that its catalog of tens of millions of licensed songs includes those by Universal Music Group, Sony Music Entertainment, Warner Music Group, and other independent music companies, such as Beggars Group, Believe, CD Baby and PIAS, with more being added.

As part of the beta, Amp is also announcing a slate of upcoming shows, including one from Nicki Minaj, who will soon bring the return of her show, “Queen Radio,” to Amp. Other shows are from Pusha T, singer-songwriter Tinashe, electronic artist and violinist Lindsey Stirling, Travis Barker, Lil Yachty, and Big Boi; well-known personalities Tefi Pessoa and Nikita Dragun; popular radio hosts Zach Sang, Kat Corbett, Christian James Hand, and Guy Raz; and writers from music and culture publication The FADER, Amazon said. 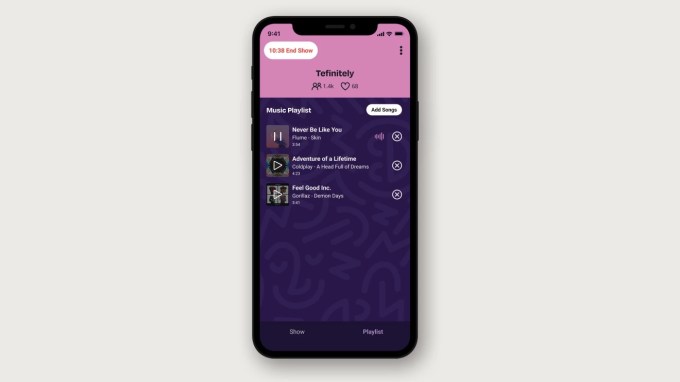 “Radio has always been about music and culture,” John Ciancutti, vice president of Amp, said in a statement about the launch. “But imagine if you were inventing the medium for the first time today. You’d combine what people love about radio—spontaneous talk, new music discovery, diverse personalities, and broad programming—with all that’s made possible by today’s technology. You’d make it so anybody with a phone, a voice, and a love for music could make their own show. And that’s exactly what we’re doing. Amp makes it possible for you to grab the mic and run the airwaves. We are creating a new version of radio that will have an infinite dial of shows,” he added.

Amp’s app is currently available only with an access code, Amazon said.

Earlier this morning, the Amp website was still password-protected, but it has since gone live.

Editor’s note: Updated 3/8/22 at 9:15 am ET with information shared by Amazon after our publication. The app, we understand, has its own music catalog that’s differentiated from Amazon Music, so we have also corrected this for further clarity.