Chicago – Editor’s note: This review originally ran as part of our coverage of the 2022 South By Southwest Film Festival on March 30, 2022. It has been expanded and republished in light of the film’s debut in theaters.

More observational than satirical (although there’s plenty of the latter too), “Bodies Bodies Bodies” aims to capture how a certain class of young people live and act today, as a group of privileged friends gather at a remote mansion to wait out a hurricane with a drunken bacchanal.

There’s recently sober Sophie (Amandla Stenberg) and her sweet naively new girlfriend Bee (“Borat 2” breakout Maria Bakalova), who serves as our point-of-view character as she peers into this debaucherous world of wealth. Pete Davidsonis the charismatic scumbum who’s hosting the party. Lee Pace is a much older boyfriend who’s been brought along for the ride. And Myha’la Herrold, Chase Sui Wonders and “Shiva Baby” star Rachel Sennott round out the friend group, which looks chummy from the outside but has its own complicated hierarchies and jealousies embedded within.

Those simmering tensions reach a full-on boiling point when a round of the titular murder mystery party game (also known as Mafia or Werewolf) unexpected turns deadly. Now that there’s a real body, who could the killer be?

WATCH FREE ON TUBI: Pete Davidson lends his voice to the stoner comedy “The Freak Brothers” 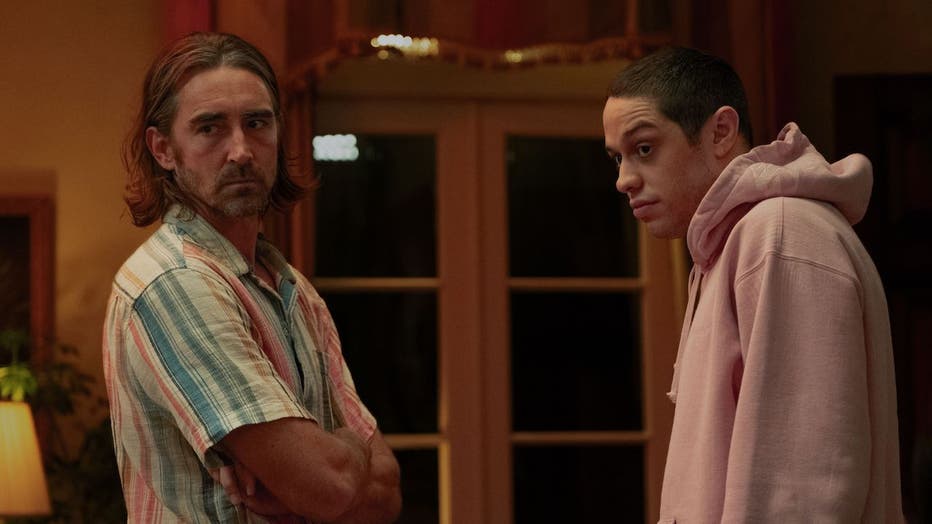 The fun of this gnarly whodunit comes from how the Gen Z characters bounce off one another over petty squabbles and self-absorbed concerns, both before and after the bodies start piling up. The characters weaponize social justice terminology as easily as they snort up lines of coke, and the film’s jokes about podcasts and group chats feel pointed but never mean-spirited; we’re laughing with these characters as much as we’re laughing at them.

Indeed, the fiendishly clever script by Sarah DeLappe manages to touch on themes of gender, class, age, addiction, sexuality and trauma without ever feeling performative or even overt about its themes. And the talented young cast add just enough dimension to humanize the various archetypes they’re playing. (Sennott is a particular standout.)

To use the word of the moment: Above all, Reijn succeeds at creating a vibe — lighting the film with glow sticks and phone flashlights once the power goes out, and juxtaposing the elegant mansion setting with the grungy aesthetic of entitled, inebriated 20-somethings. The acidic humor of “Bodies Bodies Bodies” is fueled by a very specific brand of Gen Z paranoia and exaggeration, which Reijn smartly depicts as a swirling hurricane of its own.

While “Bodies Bodies Bodies” has some things to say about modern culture, it’s mostly just here to have a good time. And its plentiful surprises are particularly fun to experience alongside an engaged audience ready to laugh and scream at each twist and turn. If “Bodies Bodies Bodies” doesn’t reinvent the slasher genre, it gives it a refreshingly contemporary sense of bite — one that will appeal to horror and dark comedy fans alike.

Make it a double feature with “Obsessed to Death,” streaming free on Tubi

“Obsessed to Death” is streaming free on Tubi — get the app

“Bodies Bodies Bodies” arrives in select theaters on Aug. 5. and opens nationwide on Aug. 12. It is not currently available to stream.

About the writer: Caroline Siede is a film and TV critic in Chicago, where the cold never bothers her anyway. A member of the Chicago Film Critics Association, she spent four years lovingly analyzing the romantic comedy genre one film at a time in her column When Romance Met Comedy for The AV Club. She also co-hosts the movie podcast, Role Callingand shares her pop culture opinions on Twitter (@carolinesiede).

About Tubi: Tubi has more than 40,000 movies and television series from over 250 content partners, including every major studio, in addition to the largest offering of free live local and national news channels in streaming. The platform gives fans of entertainment, news and sports an easy way to discover new content that is available completely free.

Tubi and this television station are both owned by the FOX Corporation.