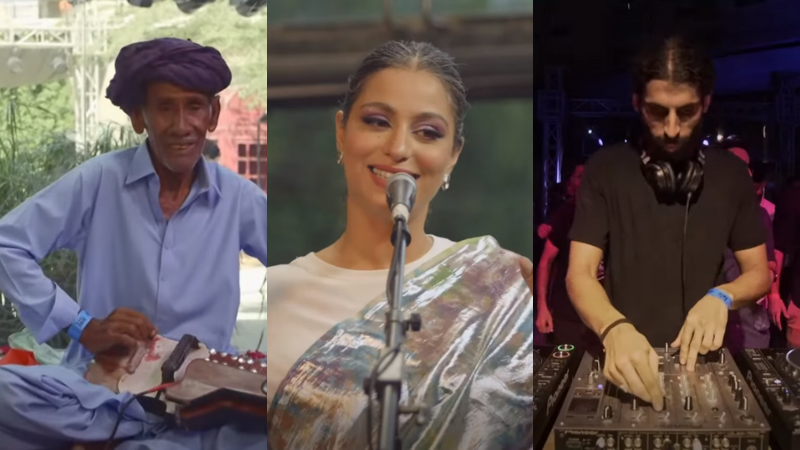 London-based online music platform Boiler Room’s first-ever broadcast in Pakistan streamed on Monday, 7pm and was a “celebration of Pakistani music”. The independent artists brought their individual magic and created a mixture that stitched EDM (electronic dance music) with folk tunes and pop music to one of the largest streaming platforms for live performances in the world.

Natasha Noorani, one of the featured artists, took to Instagram to talk about how vital this moment was for the Pakistani music scene. “I can never fully articulate what it means to be a part of this. To be alongside musicians I’ve grown up revering and for them to share their knowledge and experience and space with me is the greatest gift I’ve ever received.

“This moment has been decades in the making. I am so incredibly proud of everyone involved. I can’t wait for everyone to witness the celebration of Pakistani music,” she wrote.

Boiler Room’s Instagram account shared a post and wrote that this broadcast is “a show to celebrate the country’s new emerging dance music community and its native heritage of live performance.” The event was part-funded by the British Council with support and execution from Dialled In, Karachi Community Radio, Cape Monze Records and Chalo HQ.

The Pakistan edition kicked off its “celebration of its live music heritage” with the first performance by Balochistan’s legendary banjo player, Noor Bakhsh, reported Madeeha Syed in her piece for Dawn. She described his music as “deeply influenced by his environment” as he played his version of old folk tunes. “In between, he would describe how this was the music of the desert, of the mountains and of the birds and the animals that lived there.”

‘Faltu Pyar’ singer Noorani performed songs from her upcoming album Ronaq. During her set, the focus shifted from live instruments to electro-pop, according to Syed, who described Noorani’s performance as “romantic and playful as she peppered it with fun electronic sequences and recordings of quirky dialogues from classic TV programs and films”.

The stage by Jaubi, an instrumental quartet, “shifted the mood, bringing classical-jazz into the mix”. The Lahore-based act’s name is a very Punjabi pronunciation of the Urdu Jo bhi [Whatever, whoever], according to Syed. According to Jaubi’s website, “they skip around the genres of North Indian Classical music, modal Jazz and Hip-Ho quartet”.

The rest of the artists — Malik, Lyla, Kukido B2B TMPST and Tollcrane — stepped in with a very EDM vibe, curating their tunes on the DJ stand as a crowd danced around them, bathed in neon lights.

Netizens were ecstatic about this musical development and the “coverage” Pakistan is getting through it.

Other than Pakistan, Boiler Room will broadcast from Paris for two days on July 8 and 9 with artists from the city. They also have scheduled broadcasts in Vienna, Tbilisi, Warsaw, New York, Los Angeles, Stuttgart, Boston and London.